You Are Here Home Health News How deadly is COVID-19 for children? Here’s what we know 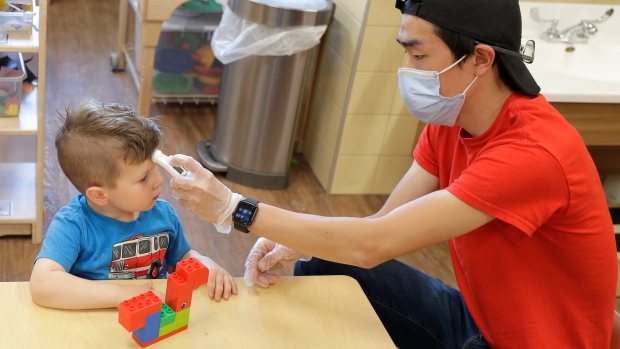 TORONTO — As it becomes clear that COVID-19 will remain a serious concern when the new school year starts in September, parents have a lot of questions.

How likely is it that a child will get the disease? What happens if they do? What are the symptoms to look out for? How many children who contract the novel coronavirus end up in hospital, or dead?

While there are still many unknowns about children and the novel coronavirus, the answer to that last question, at least, seems clear – and perhaps even reassuring.

“In Canada, the death rate is about one per 10,000 infected,” Dr. Stephen Freedman, a Calgary-based pediatric emergency medicine physician and researcher, told CTVNews.ca on Monday via telephone.

One is the key number there. There have been 7,888 cases of COVID-19 in patients under the age of 20 in Canada, according to Public Health Agency of Canada data last updated Monday night. Of those thousands of young infected patients, only one has died.

We know that the one young Canadian to die after contracting COVID-19 is female, but nothing else – not their age, not whether their medical history left them at higher risk of serious complications from infection, not even if they died because of COVID-19 or died of something else after being diagnosed with the disease.

One death out of 7,888 cases in children and teenagers means that less than 0.013 per cent of young COVID-19 patients in Canada have died – a far smaller proportion than in Canadian COVID-19 patients as a whole, among whom the death rate is 8.1 per cent.

Most major countries have higher death rates for children with COVID-19 than Canada does, but even so, there is a clear overall pattern.

More than four per cent of COVID-19 cases in the United States have been fatal, but only about 0.2 per cent of patients under the age of 17 have died. In the United Kingdom, those figures stand closer to 15 per cent and 0.15 per cent.

A study of 100 children who contracted the novel coronavirus in Italy found that none of them died, even though more than 14 per cent of all known COVID-19 cases in the country have been fatal. A comprehensive study from Europe found a COVID-19 mortality rate in children of less than one per cent. In China, only one of the first 2,135 pediatric patients to have contracted the virus later died. Researchers from Ontario concluded that it is “rare” for children to die after contracting COVID-19 in high- or middle-income countries.

In many of the cases where children have died after contracting COVID-19, Freedman said, there is little evidence that it was actually the virus that killed them.

“They often are high-risk children who have significant co-morbidities that place them at risk for significant outcomes with any virus,” he said.

Canadian children who contract COVID-19 are also less likely than older patients to land in a hospital or an intensive care unit. Approximately 1.5 per cent of young patients are known to have been hospitalized and 0.3 per cent received care in an ICU – numbers Freedman described as “exceedingly low,” especially given they stand at 9.8 per cent and two per cent, respectively, for all Canadian patients.

On and on it goes. While the virus clearly can infect children – remember, this was something that nobody seemed entirely sure of in the earliest days of the pandemic – there is also strong evidence that it is not as deadly for the youngest among us as it is for the rest of us, or as likely to cause severe illness.

“The risk is not dramatic in children,” Freedman said.

“The risk is … if there’s a big spread and if families are not doing social distancing, that very rapidly within households, the virus, if it does spread rapidly from children to others, could make it up the chain in terms of ages and reach high-risk populations.”

Early research out of Europe suggests that children are more likely to catch COVID-19 from adults than they are to transmit it to adults, and an Australian study is one of several to find evidence that reopening schools does not lead to child “super-spreader” events.

“We actually don’t know how big the iceberg is below the surface,” he said.

“We do know [children] are less likely than a symptomatic adult to transmit it; we don’t know, on a scale of one to 10, where they actually fit in that regard.”

Through his work at the University of Calgary and the Alberta Children’s Hospital, Freedman is involved in two research projects aiming to help fill some of these gapsin knowledge. He’s leading an international effort to gather information about 12,500 children who seek medical care because of COVID-19 infection, as well as another study examining children who are infected but asymptomatic, attempting to further determine the likelihood of them passing the virus on to their family members and receiving it from them.

Other mysteries involving COVID-19 and young people include multisystem inflammatory syndrome in children, the rare complication that presents similar symptoms to Kawasaki disease, and the skin lesions that lead to a condition dubbed “COVID toes.”

Answers to most of these questions are likely at least several months away, meaning children could be heading back to school before it is clear exactly how they differ from adults when it comes to COVID-19, or exactly what role school settings might play in extending the pandemic.

“It’s really hard to extrapolate from one jurisdiction to another because the policies and procedures in place, the prevalence of disease, vary dramatically,” he said.

Until there is more clarity, Freedman said, the best option for all Canadians is to follow the advice from public health authorities on limiting the potential for the virus to spread, even as new case numbers dwindle.

“What Canada has done really well is social distancing, wearing masks, good hand hygiene precautions – and we need to keep that up. Otherwise, we’re going to see situations where spread becomes rampant,” he said.