You Are Here Home Health News How old do you have to be to get the AstraZeneca COVID-19 vaccine in each province? 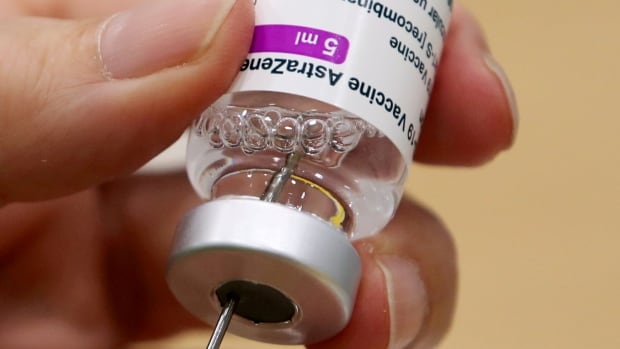 Many provinces have been lowering the age of eligibility for the AstraZeneca-Oxford vaccine to as young as 40. Here’s a look at the rules, recommendations, and age cutoffs are across the country.

Remind me — which vaccine is this?

The AstraZeneca-Oxford vaccine against COVID-19 is a non-replicating viral vector vaccine. Unlike Moderna’s and Pfizer’s mRNA vaccines, it doesn’t need to be stored at extremely cold temperatures, and it can be easily administered in pharmacies and doctor’s offices. Besides the AstraZeneca brand manufactured by the company itself, the vaccine also comes in a version known as COVISHIELD made by the Serum Institute of India.

What are the federal regulations and recommendations for its use?

Health Canada approved the AstraZeneca-Oxford vaccine for use in Canada for people 18 and over under an interim order on Feb. 26, 2021.

A month later, on March 29, Canada’s National Advisory Committee on Immunization recommended that provinces pause the use of the vaccine in those under the age of 55 due to safety concerns. That was after reports of rare cases of blood clots in some patients in Europe, mostly younger women.

Many provinces suspended AstraZeneca-Oxford vaccinations for those under 55 in response.

However, in April, as COVID-19 cases and hospitalizations hit record levels in provinces such as Ontario, pharmacists and doctors began pushing to expand eligibility. They said some doses were going unused due to the age restrictions, and that the benefits outweighed the risks even in younger age groups.

On April 18, federal Health Minister Patty Hadju told reporters that in fact, provinces and territories are free to use the vaccine on any population over 18. That’s because NACI’s recommendation is only a recommendation and doesn’t override the conditions of the vaccine’s approval.

Who can get the vaccine in each province?

As of April 19, here is what the rules are in provinces across Canada:

Only those age 55 and over can get the AstraZeneca-Oxford vaccine in B.C., although medical professionals in the province are calling for the province to lower the minimum age.

People born in 1981 or earlier (turning 40 this year and older) will be able to book the vaccine starting Tuesday, April 20, said Premier Jason Kenney in a Tweet on April 18. He said that was based on advice from the province’s Chief Medical Officer of Health Dr. Deena Hinshaw. Bookings will be accepted starting 8 a.m. local time on Tuesday via the province’s online booking system or by calling 811. Walk-ins are also available, Kenney said in a subsequent tweet.

Currently, only those age 55 or older can get the vaccine in Saskatchewan. However, on April 19, Premier Scott Moe said on Twitter that the province is “actively reviewing” lowering the eligibility age to residents aged 40+ following Health Canada guidance and decisions by Alberta and Ontario.

People aged 40 and older can get the vaccine from a doctor or pharmacist, the province announced on April 19. No health preconditions are required to qualify. Previously, only those age 65 and older or those aged 55 to 64 in two priority groups based on vulnerabilities to COVID-19 could get the vaccine.

People turning age 40 and older in 2021 with a valid Ontario (OHIP) health card will be offered the shot at pharmacies and primary care settings such as doctors’ offices starting Tuesday, April 20, Ontario Health Minister Christine Elliott announced on April 18.

The province will be lowering the age limit for the vaccine from 55, but Public Health Director Horacio Arruda said Monday, but he did not specify what the new age limit will be.

People aged 55 and up are eligible for the vaccine.

The province recommends the vaccine for those 55 to 64 years of age.

Those 55 and older can get the vaccine at pharmacies.

None of the territories will be receiving any AstraZeneca vaccines. Northern residents will be vaccinated with Moderna’s vaccine.