TORONTO — Homayra Ahmed must have spent hundreds of hours outside her neighbourhood McDonald’s, using the spotty Wi-Fi to attend online lectures.

“I would just sit on the sidewalk and do my work there,” the recent McMaster University nursing graduate told CTVNews.ca in a video interview. “Zoom would cut in and out because the internet was not stable at these places.”

Turning on her camera would sometimes crash the virtual class altogether. But fast-food restaurants were Ahmed’s only option to get internet service since libraries were closed during the pandemic and there was no widely-available internet at the Hamilton, Ont. homeless shelter she and her family stayed at for months.

“I would just sneak out and just leave the shelter and within a few hours I would have to come back due to curfews,” Ahmed said.

Shelter living, curbside learning and going to the hospital for full-time clinical training was how she spent 2020. Her grades understandably tanked at numerous points last year and she nearly had to drop out of her program.

But all of that is in stark contrast to where she is today.

Was an honour to be masters of ceremonies at the 75th anniversary and class of 2021 graduating pinning ceremony! Although celebrations were majorly impacted this year it is a relief to be done with school (for the time being)! @macnursing https://t.co/NfnpuftZS7

And the icing on the cake? Last week, she was a master of ceremonies at the virtual event where students are given pins to mark their graduation. “That was honestly a surreal moment,” she said, adding that leading such a triumphant moment for others was “really humbling to me.”

Ahmed hadn’t set out to finish her degree on the side of a road but, after everything she and her family overcame this past year, a weak internet connection wasn’t going to get in her way.

‘WE HAD NOTHING WITH US’

Ahmed’s parents immigrated from Bangladesh and she’s the eldest of four sisters born in Hamilton, Ont. Life at home was never easy and in November 2019, Ahmed led her family through one of the most turbulent times of their lives.

“Growing up, I was a victim of domestic abuse. So, me and my three younger sisters, as well as my mom, we decided to take a stand in my third year of nursing to leave that situation,” Ahmed said.

“We didn’t have any of our belongings. We had nothing with us. I just had my backpack with my laptop that I would just regularly bring to school,” she said.

For the first few days, Ahmed slept in 24-hour libraries, while her family members each stayed in different homes of various family friends. She eventually reached out to her school, which provided some emergency relief for a brief hotel stay but that money quickly dried up.

The family initially had no luck staying at shelters across the province because “we wanted to stick together as a family, but the system didn’t have a space for all of us.”

Fed up, Ahmed told her family to wait outside Martha’s House shelter in Hamilton and simply refuse to leave until they were all admitted, which they eventually were. Their first night they slept in the kitchen.

For more than half a year, they lived out of shelters like that one, with Ahmed trying to keep up with school using spotty internet at fast-food joints. 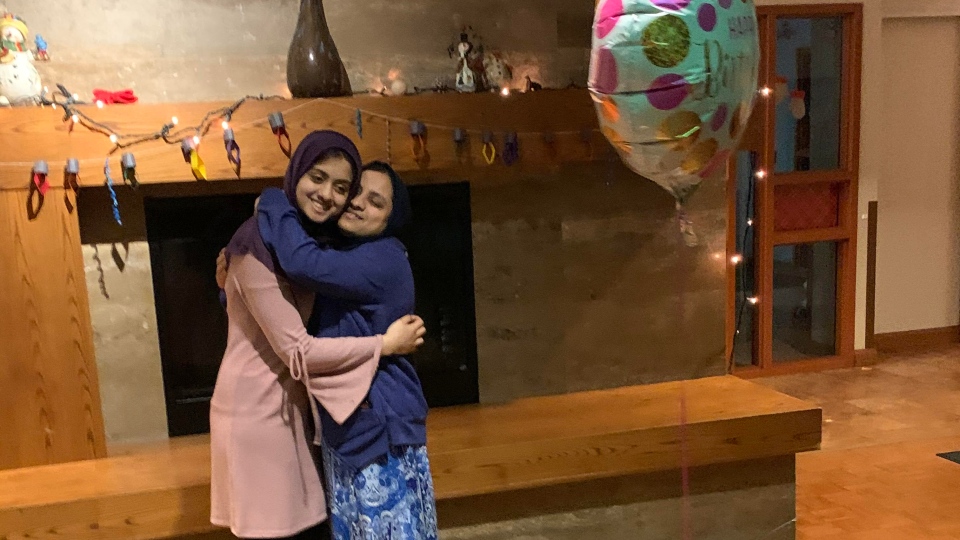 Homayra Ahmed hugging her mother in the kitchen of the shelter they stayed at during 2020.

Some stability came by the fall, when they eventually found a more permanent place to live. But, with a mother who struggles with English and younger sisters who are just teenagers, the bulk of paying the rent fell on Ahmed.

At one point, she even took on three jobs to make ends meet.

“I honestly tried my best to pick up whatever I could on my own shoulders, so they [my sisters] could continue high school because I knew that everything was taking a toll on them,” she said and only briefly mentioned that she ended up in hospital herself due to all the stress.

Still, she persevered and in the past several months, her work began paying off.

‘I WANT TO BE ABLE TO USE MY VOICE’

Since her second year of university, Ahmed founded and has been leading McMaster Hope for Hearts, a club devoted to raising awareness of congenital heart defects like hers; and throughout her whole ordeal she remained its president. She’s also continued to advocate for fellow students as the senior representative for McMaster University Nursing Students Society.

And, at the start of this year, some of her volunteering was recognized.

She was chosen as the Registered Nurses’ Association of Ontario’s student of the month — an award given to “outstanding, enthusiastic and diligent nursing students.” And last month, she received the Registered Nurses Foundation of Ontario’s Mildred Grace Harbour Memorial Scholarship, which is given to students who demonstrate an “ability to inspire others, and their practice of caring above and beyond standard expectations”

Grateful to have received the @RNFOO scholarship out of 800 applicants. While going through a difficult time it is hard to see the light at the end. It was amazing networking at the gala and learning from other inspiring individuals! I hope to continue inspiring others pic.twitter.com/TzhyleBLVA

In recent months, Ahmed’s fellow students learned about her story through her Twitter feed, where she talks openly about experiencing homelessness, how students struggled to make ends meet during the pandemic, and how nurses were being overworked due to staff shortages.

This has been my biggest fear entering the workforce as a new grad – being short staffed and not having the proper support on the floor to help. https://t.co/UJcDjWQ8nC

“Many students actually reached out as well and said, like, ‘Wow, I never knew you’re going through this,’” she recalled. Others shared their own pandemic struggles with Ahmed, and how they’d been inspired during the year by her story and continued advocacy.

“So that felt like a true a-ha moment for me… I didn’t even realize the impact I was having on other students, especially when I started speaking up about it in my last year of the last semester.”

“I want to be able to use my voice,“ she said. “Graduating feels like a new chapter in my life has opened up one where I can finally make families’ lives better.”

Right now, this means fighting for adequate housing and compassionate health care for everyone, regardless of socioeconomic status. But Ahmed admits she might need more schooling and experience to accomplish her biggest ambition.

“I do plan on opening a clinic to be able to help others in tough situations — maybe as a nurse practitioner, which has been a dream of mine for a while,” she said, adding that for now, “I want to work my way up.”