You Are Here Home Health News Important thing to know about the novel coronavirus: It’s a shapeshifter 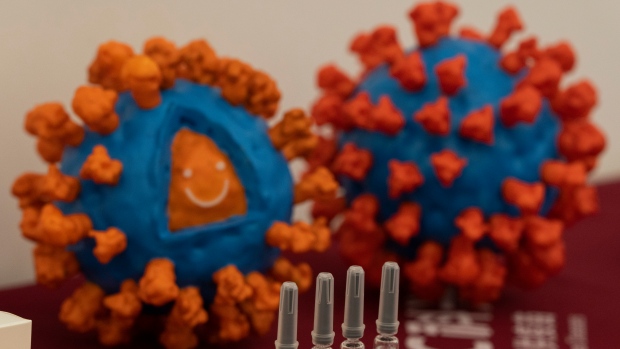 TORONTO — One year into the COVID-19 pandemic, we’re all familiar with the “spike protein” – the thorny protrusions that allow the novel coronavirus to attach itself to the cells of its human host.

Images of the SARS-CoV-2 virus give prominence to the spikes. They’re even a memorable part of the design of the “Mr. Covid” character in Alberta’s hit public health ad campaign.

Here’s the thing, though: the virus is changing the shape of the spikes to get around the defences our immune systems are mounting against it.

That helps explain why the B.1.1.7 variant first identified in the United Kingdom seems to be more infectious: Its spike proteins have a slightly different shape, which makes them able to evade immune responses that catch more widely circulating forms of the virus.

But it isn’t just happening with that variant. Kevin McCarthy, a microbiology professor at the University of Pittsburgh, and his team started looking into the genetic sequences of all known SARS-CoV-2 variants last summer.

They were following the progression of B.1.1.7 before it was in the global spotlight – or at least before it had that name, and before anyone knew how much of a problem it would become.

What they were noticing, as they scanned the international database, was that most of the new variants had something in common. Although the modifications to the virus were coming from different places, they tended to happen in the same spots of the genetic sequence – suggesting a step in the evolutionary process was underway.

“Evolution was repeating itself,” McCarthy said Wednesday in a press release.

“By looking at this pattern, we could forecast. If it happened a few times, it was likely to happen again.”

Even more interesting was what these changes signified. Most of them involved genetic code disappearing in ways that allowed the virus to change the shape of its spike protein.

McCarthy was the lead author on a study published Wednesday in the journal Science. The study explains, in technical detail, how these modifications to the genetic sequence of SARS-CoV-2 are evolving the virus, making it capable of resisting the neutralizing antibodies created by the human immune system to stop the previous form of the virus.

Importantly, this evolution does not make the virus unstoppable. Before McCarthy was recruited to the project, a team led by Paul Duprex – the director of Pittsburgh’s Center for Vaccine Research – first detected the genetic modification in a COVID-19 long-hauler who was infectious for 74 days.

They were able to track the back-and-forth battle waged between the virus and the patient’s immune system, spotting virus mutations as they happened. Despite the mutations, the patient’s antibodies were still capable of neutralizing the threat, even though it wasn’t quite what they were programmed to take out.

A similar process could play out on a wider scale, with SARS-CoV-2 potentially evolving resistance to our first vaccines, which would necessitate new formulas to take out new variants.

“Going after the virus in multiple different ways is how we beat the shapeshifter,” Duprex said in the press release.