You Are Here Home Health News In this long-term care home, almost everyone is vaccinated — and life is opening up 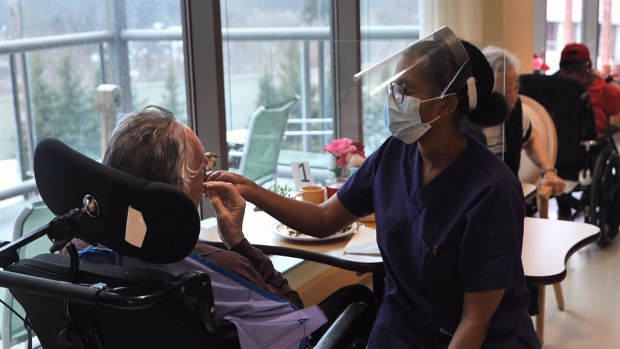 TORONTO — For nearly a year, the residents of Chester Village long-term care home have lived a life of restrictions — prohibited from leaving their specific floors, with protective measures in place to keep them safe from COVID-19.

But thanks to vaccines, things are about to change.

The residents of this Toronto long-term care home have received both of their vaccine shots, and 80 per cent of the staff have also been vaccinated.

Restrictions are beginning to ease inside the home, and moods are lifting with it — this is life on the other side of COVID-19.

“Today’s really special, because it’s the first day that our residents will be expanding their social circles here at Chester Village,” Cynthia Marinelli, CEO of Chester Village, told CTV News.

Marinelli explained that residents will finally be able to come down to the activity hall in the home, one floor at a time.

“They haven’t done that in a year and they’re really looking forward to just being in a bigger group and seeing more people again,” she said.

A CTV News camera crew were the first allowed inside the home to film the re-opening — provided that they first passed a 15-minute antigen test for COVID-19.

What they witnessed was a home slowly coming back to life.

Ninety-year-old John Greenland was anxious to visit the coffee shop in the home, which is also re-opening.

“I have missed it since they closed about a year ago,” he told CTV News. “It’s like taking a friend away.”

Edward Hayes, a 79-year-old resident, said that he feels “terrific.”

“Being able to go downstairs and see more of the residents […] it’ll be nice.”

Another resident, Jean Liddell, said she found the isolation stifling. Her reaction to restrictions within the home lifting?

Early in January, Chester Village, which is a not for profit facility, became one of the first seniors’ homes in Canada to get vaccinated.

“Since we’ve administered the second doses of the vaccine to residents, both in long-term care [and] retirement homes, […] we’ve not seen one death related to COVID,” Dr. Jarred Rosenberg, a geriatrician with Michael Garron Hospital, told CTV News. “And we’ve also not seen any residents get sick from COVID.”

“I think now that their long term care facility is vaccinated, as are all the facilities in our area, we can really start to reverse some of [the restrictions] that we’ve seen in long term care,” Rosenberg said. “And we can start to reintroduce exercise programming, social programming, things that have a really significant impact on our health as we age.”

It has been a miserable year for those in senior homes and long term care.

In Canada, more than 15,000 people have died due to outbreaks in these homes — two out of every three lives claimed by the virus in Canada.

Countless others have been shut away, lockdowns which confined elders to their rooms and cut them off from their support systems.

Many lost weight, saw their health decline and succumbed to depression and despair. The full toll is still unknown.

“There’s many older adults in nursing homes and some of the community who have not been infected with COVID, but have suffered dramatically in terms of their function, in terms of their cognition,” Rosenberg said. “From the isolation that’s been imposed […] because of the pandemic.”

While Chester Village only saw two residents fall ill during the pandemic — both of whom recovered — quarantine measures and virus fears took their toll on residents.

Hayes told CTV News that hearing about the virus sweeping through other long-term care homes left him with a sense of dread.

“With so many deaths [in] long term care that you were thinking, ‘when’s my turn?’ Going to either get sick or die, unfortunately,” he said. “But since I’ve been vaccinated that’s no longer a concern really.”

Although residents will now be able to spend time in person with friends in a way they haven’t been able to for a year, that doesn’t mean everything is as it was before COVID-19.

Everyone but the residents will be wearing masks and other PPE as needed, and social distancing is still the standard. The home is keeping an eye on the situation outside of Chester Village as well, wary of threats such as variants.

“So we’re taking baby steps, baby steps to bring them off the floors into more public, into more fun,” Marinelli said. “But we still have to be really careful.”

Still, the celebratory atmosphere inside the home is clear.

“I know the residents are really excited,” Marinelli said. “We’ve done a lot of activities for them over the past year and made it really fun for them still but it’s not the same.

“Today is like it’s going to be everybody’s birthday, and they get to come down and celebrate together again and just see a different view than the view they’ve looked at for the past year.”

One of the most anticipated changes? Bingo games are coming back.

The residents, finally seeing some semblance of their previous lives returning, are over the moon.

“It’s kind of nice that it’s […] starting to get back to normal,” Hayes said.

And it’s a sign for the rest of us that there is light at the end of a long dark tunnel.