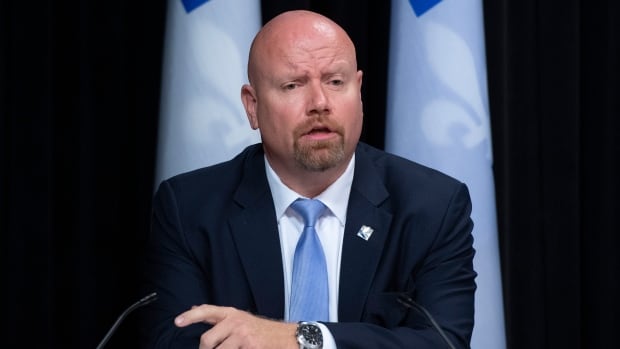 The experiences shared by dozens of Indigenous families from across Quebec span several decades but are all disturbingly similar.

A child gets sick and requires care at a clinic or a hospital, far from home. The parent isn’t permitted to go along.

Often they are told the child has died — but there is no death certificate or burial plot to prove it.

Many are left to wonder if the child was adopted into another family.

After decades of unanswered phone calls and unheeded requests, the Quebec government says it now wants to actively help those families search for information about what happened to their children.

A new duty to divulge information

On Wednesday, Quebec’s Minister of Indigenous Affairs, Ian Lafrèniere, joined his predecessor in the job, Sylvie D’Amours, in introducing Bill 79 to the National Assembly.

The proposed law outlines a series of obligations for government officials if a family requests documentation on the whereabouts of their child.

The initiative was greeted favourably by several Indigenous leaders including Michèle Audette, a former head of the Native Women’s Association of Canada who served as a commissioner on the National Inquiry into Missing and Murdered Indigenous Women and Girls (MMIWG) in 2017.

“Knowing the circumstances surrounding the death or disappearance of our children is essential to taking the path of healing and that of truth,” Audette, now the senior advisor for reconciliation and Indigenous education at Université Laval, wrote on her personal Facebook page.

“After reading Bill 79, I invite us to collectively remember that we must not forget the systemic causes … behind the loss of these little children of light,” Audette said.

The draft law addresses several recommendations made by the MMIWG commissioners, but there is one it has yet to take on: launching a public inquiry into the Quebec government’s role in the disappearances.

Lafrenière said the province will not only make sure every shred of information is handed over, it plans to accompany families and assist them in their search for answers.

“I’m thinking of the families in Pakua Shipu, Pikogan, Manawan, Wemotaci and Natashquan, and there are many others,” Lafrenière said.

Many of their stories surfaced during the MMIWG inquiry. They hailed from different regions of the province, including the Lower North Shore, the Mauricie and the Abitibi.

Lafrenière said when he heard about them, he had trouble believing something “so cruel” had happened in Quebec.

Most cases were reported in the 1960s and 1970s, but several are more recent — the last known disappearance happened in 1989.

“I can’t imagine how someone can grieve without ever receiving any information,” Lafrenière said. “It’s unimaginable.”

‘They have a right to the truth’

D’Amours first sought to address the issue in February of this year, by adding an amendment to a bill on pharmacists’ services, Bill 31.

But families quickly asked for a separate law — which they argued would confer greater dignity on the process — to address the scope of a government practice that went on for decades.

D’Amours said she had wanted to act quickly because many parents are aging. Some are now in their eighties.

“They have a right to the truth,” she said.

D’Amours, who appeared in public with Lafrenière for the first time since he replaced her in October, said “we’ll do everything we can to try to find these children.”

Lafrenière said the purpose is to ensure any government body, like a regional health board for example, will hand over any and all information it holds about a missing child, without surviving relatives having to jump through access-to-information hoops.

The government will also set up a team dedicated to accompanying families and explaining the information.

“We won’t just send them a document — with medical terms from the 1970s — and be done with it,” said Lafrenière.