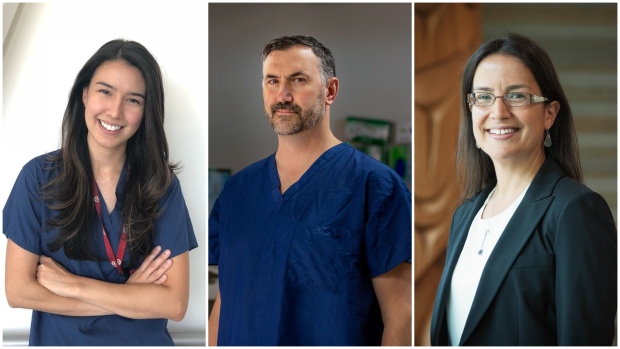 TORONTO — Indigenous patients had higher rates of complications after surgery; were less likely to undergo life-saving procedures, such as cardiac surgery and caesarean births; and experienced longer wait times for kidney transplants, according to a new study from an Indigenous-led team of experts.

Based on a deep dive into the mortality data from four studies, researchers from The Ottawa Hospital and the University of Ottawa also found Indigenous peoples were 30 per cent more likely to die after surgery.

The findings — published in the Canadian Medical Association Journal on Monday — are the latest ones from the team, which is building a new research program to better understand the surgical experiences of First Nations, Métis and Inuit people.

“Understanding surgical outcomes and access to surgical services is a first step towards addressing colonialism and structural racism within healthcare, so we can identify the gaps and determine what needs to be improved,” said Dr. Jason McVicar, lead researcher and Metis anesthesiologist at The Ottawa Hospital.

The latest project he’s leading is notable for its number of firsts.

Not only did the team say their study is the first to analyze all available surgical outcome data for Indigenous Peoples, but the team itself includes Dr. Nadine Caron — the first Canadian female general surgeon of First Nations descent — and Dr. Donna May Kimmaliardjuk, Canada’s first Inuk cardiac surgeon.

Using 28 published studies, his team was able to compile information on 1.9 million patients — with around 10 per cent — or around 202,000 patients, who identified as Indigenous.

“Access to surgery is essential for good health,” said Dr. Daniel McIsaac, an associate scientist and anesthesiologist at The Ottawa Hospital, and associate professor at the University of Ottawa in a press release.

“Many major illnesses require a trip to the operating room, so unequal access to surgery and poorer outcomes after surgery is a major problem.”

DOCTOR ON CANADA DATA: WE’RE DRIVING IN THE DARK

The study is consistent with inequities in surgical outcomes for Indigenous peoples in other high-income countries, but it turns out, Canada stands apart in its lack of good data.

McVicar and his team found surgical data on Indigenous peoples in Canada is fairly limited and of poor quality.

“We’re driving at highway speeds in the dark with the lights off and we can’t even tell that we’re a ditch,” he said. Researchers had to come up with different ways of determining Indigenous identity for patients, with none specifically addressing surgical outcomes for Inuit or Metis patients.

McVicar, who’s also an assistant professor at the University of Ottawa, said this meant “we need better data” and said these communities are far too often treated as a monolith, instead of as incredibly diverse, distinct and with their own rich histories.

He called for better quality research and real-time outcome monitoring for Indigenous patients. But he said public health officials, hospitals and clinics had significant hurdles ahead of them in terms of getting that done.

Hospital and clinic staff have to figure out how to safely collect Indigenous identity data that doesn’t further marginalize patients who may have already experienced systemic discrimination or racism in the health care system.

“They’re not going to want to identify as First Nations, Inuit or Métis unless they feel safe,” McVicar said, suggesting hospitals or clinics could assign a health navigator to help patients have an advocate — who would also be able to speak their language.

Building this trust could also include having dietitians provide, for example, “locally-sourced, traditional foods to help patients on their path to healing.” He said everyone, from the cleaners, to the nurses, to the orderlies, to the anesthesiologist, to the surgeon — they all have a part to play to ensure Indigenous patients feel safe.

And in order to do that effectively, McVicar urged more deference and better partnerships with remote communities and agencies already doing similar work, such as the First Nations Health Authority in British Columbia: “Because they are the experts.”

“Those solutions will only be successful if Indigenous communities are equal partners in the process,” he said. “To address the systemic discrimination and racism in our health care system, we need to rebuild it… we’re not we’re not going to solve this with one hour of sensitivity training.”