You Are Here Home Health News Is an $800 purifier best to clean your home’s air? Marketplace tested 5 top brands and their claims

Clean indoor air is increasingly important as COVID-19 keeps Canadians inside. Popular air purifier brands are making a lot of promises about what they can do to keep your home safe, but a CBC Marketplace investigation found that a homemade DIY purifier can actually outperform some of the most well-known brands on the market.

There are plenty of claims for consumers to wade through: “the only air purifier, heater and fan to clean a whole room properly;” “UV-C light killing germs;” and “true HEPA filter” are just some of the promises Marketplace investigated.

Working with Siegel and his team, Marketplace put five popular brands to the test: the Levoit LV-H132, GermGuardian AC5350B, Dyson Pure Hot + Cool, BlueAir Blue Pure 211+ and the Honeywell HPA 160, as well as a DIY box fan with an added filter.

Air purifier sales in Canada jumped nine per cent in 2020 compared to pre-pandemic 2019, totalling $136 million, according to statistics from market research firm Euromonitor.

But air purifiers need to be efficient and sized appropriately for the space they are in. Air flow is also key. However Siegel warns all of those things are not enough on their own to protect your family from COVID-19. You still need masks, hand-washing and physical distancing to keep the virus at bay.

A HEPA (high efficiency particulate air) filter is a key part of the equation, too. Viruses such as the novel coronavirus that causes COVID-19 often attach themselves to dust or droplets, and a good air purifier with a HEPA filter can help capture them.

All HEPA filters are supposed to remove at least 99.97 per cent of dust, pollen, mold, bacteria and airborne particles. All of the models we tested use pleated HEPA filters.

Marketplace purchased 15 devices in total — three of the same models for each of the five brands used in our tests. Using incense smoke, Siegel and his team tested each device to see how much air-cleaning power it delivers — what’s known as the Clean Air Delivery Rate (CADR). 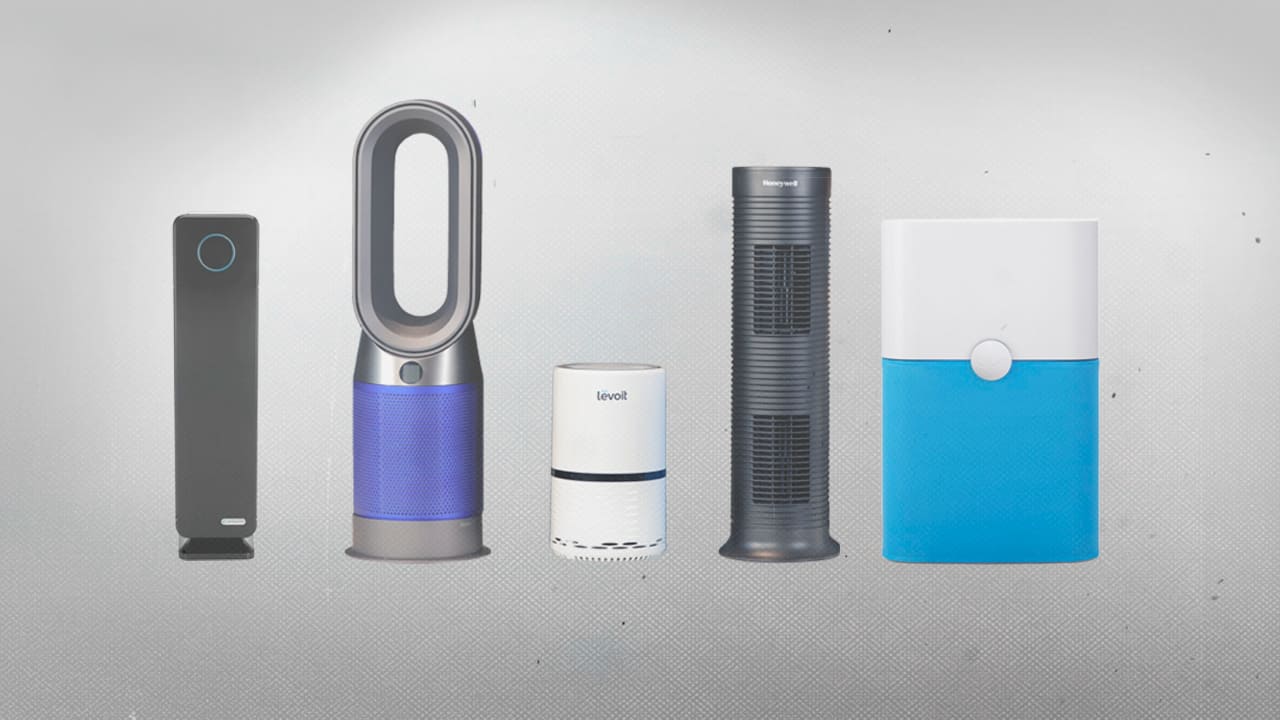 An $800 Dyson air purifier we tested doesn’t clean your air as well as some less-expensive products. Here’s what we found. 3:09

The CADR measures how long an air-purifying device takes to remove pollen, smoke and dust; different CADR numbers correspond to each one. The benchmark allows consumers to compare the effectiveness of portable air purifiers. You’ll find the CADR listed in either cubic feet per minute (cfm), or, in Canada, in cubic metres per hour (m3/hour).

Siegel recommends looking for a CADR rating for smoke of about 200-300 m3/hour (118-176 cfm) for cleaning small to medium-sized rooms. The smoke CADR is generally the lowest and most conservative number, said Siegel.

WATCH | Here’s how our test worked: 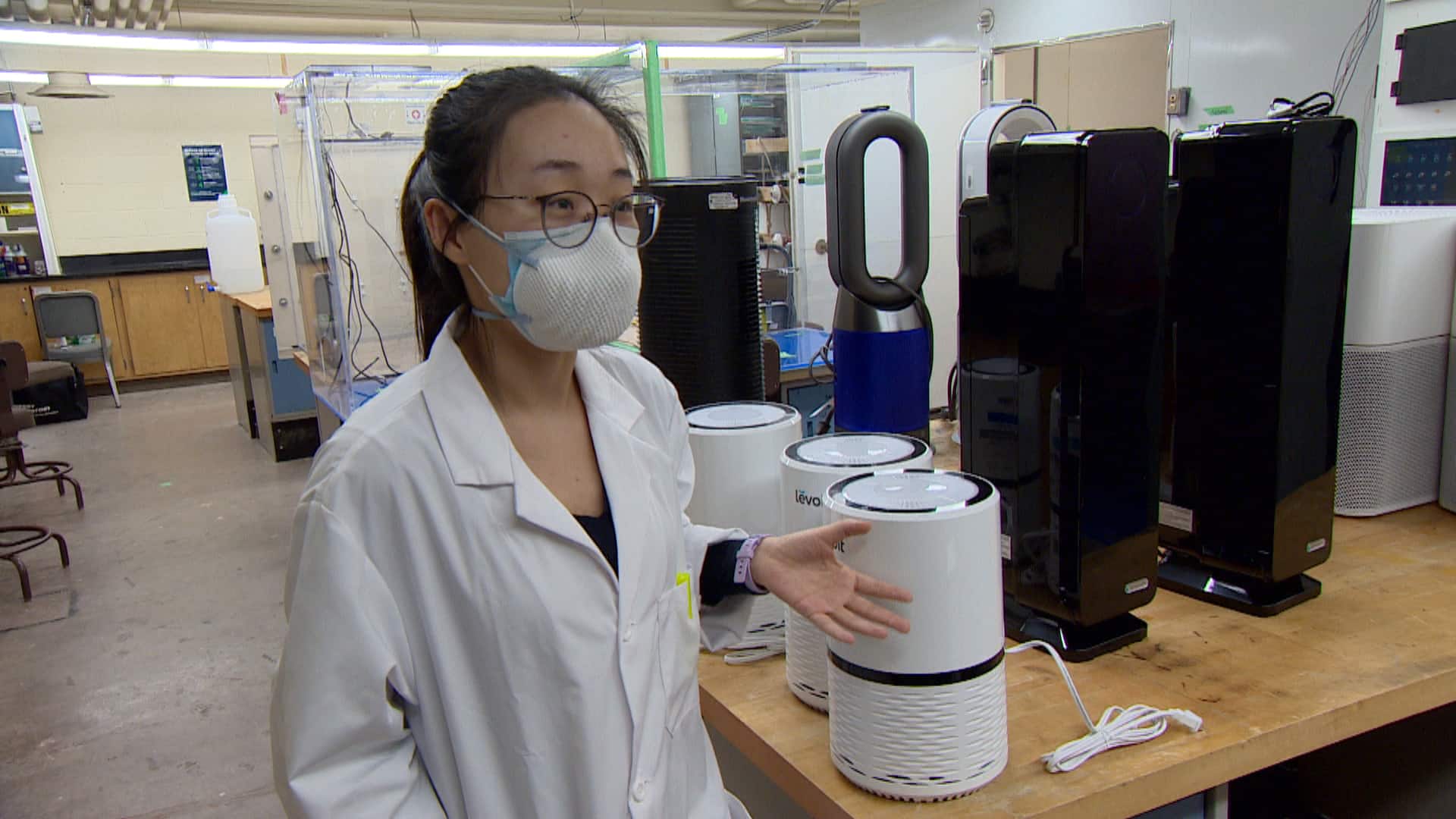 Siegel also threw another set of air purifiers into the mix — a do-it-yourself version that consists of a box fan and a filter, taped together with painter’s tape. The filter he used was not a HEPA, but a MERV-11 filter, which is cheaper and easier to find. All of the materials were purchased at a hardware store for about $70.

The BlueAir Blue Pure 211+, priced at about $400, performed the best in our tests, with an average CADR of approximately 560 m3/hour.

The poorest performer was also the cheapest product — the $150 Levoit LV-H132, with an average CADR of approximately 60 m3/hour.

In its response to Marketplace, Levoit said this model is reviewed and rated positively by customers and is one of Canada’s top-selling products; it also noted that this is a desktop model specifically designed for smaller spaces.

While a poorly performing cheaper model might fall into the category of “you get what you pay for,” our $70 DIY box fan and filter outperformed the Levoit by a large margin, averaging just under 200 m3/hour in our tests.

At the pricier end of the scale, the Dyson Pure Hot+Cool did not perform as well as some of the less-expensive products.

The Dysons we tested averaged a CADR of about 140 m3/hour, lower than most of the other air purifiers we tested, and well below the approximately 200 m3/hr Siegel recommends for cleaning small to medium-sized rooms.

Dyson air purifiers consistently test lower than other air purifiers; Consumer Reports tested the Dyson TP04 Pure Cool Air Purifier and found it “one of the worst-rated air purifiers in CR’s [CADR] tests, despite being one of the most expensive.”

The Dyson Pure Hot+Cool HP04 also has a heater. In this case, Siegel said, “it is clear that you are paying more for the features than you are for the air purifier.”

Marketplace took its results and questions to Dyson engineer David Hill at the company’s headquarters in Malmesbury, England.

“We are, we think, delivering quite a good value proposition for the consumer,” he said, stressing that Dyson purifiers can sense pollutants in the air as well as capture them, and also provide strong air projection.

Dyson has developed its own testing methodology, the POLAR test method, which, unlike the CADR, Hill said, “measures the intelligence of the purifier, the ability for it to know when that room is clean or dirty and automatically react, and its ability to mix that pure air around the room.”

While Hill agrees that CADR is an important part of purification, he notes that it is important that products also sense and capture pollutants, and project air.

“I think what we’re trying to do is pull back a little bit from the CADR metric,” he said. “Not everyone needs an enormous CADR, has huge rooms or incredibly dirty air.”

Several experts told Marketplace the CADR is the most important metric and an internationally recognized benchmark.

“CADR is what you want to know, period,” said Francis (Bud) Offermann, an indoor air quality researcher who has helped develop test methods for the performance of portable air cleaners with the American Association of Home Appliance Manufacturers (AHAM).

In terms of price and performance, the Honeywell True HEPA Whole Room Air Purifier with Allergen Remover HPA160 performed in the middle range of our pack, averaging a CADR of about 180 m3/hr. Marketplace found this product retailing for around $200.

Honeywell said its air purifiers are AHAM certified and compliant with AHAM standards, and are independently validated through repeatable, peer-reviewed tests.

One of the key promises from GermGuardian is that its AC5350B 28″ Air Purifier with HEPA, UVC & Digital purifier is equipped with a UV-C light that can “kill germs.” Marketplace paid around $200 for this model.

While some professional-grade UV lights can do that, the experts Marketplace interviewed said the small dose of UV light GermGuardian’s purifier delivers is not doing much of anything.

James Malley, a professor of civil and environmental engineering at the University of New Hampshire and an expert on UV light, said that while UV-C light has been used for over 100 years to disinfect and kill viruses, the product must be properly designed and operated, and must use strong, directed UV-C light.

WATCH | Cleaning your indoor air on a budget:

An indoor air scientist explains what you can do to keep your home’s air clean without buying a purifier. 4:00

After analyzing the UV dose and the UV-C power of the GermGuardian, Malley said he feels confident that the UV dose would not be enough to significantly reduce airborne pathogens.

GermGuardian did not give a clear response to our questions about its UV light, but said its purifier “eliminates over 99 per cent of airborne germs in a two-hour time frame,” and all their purifiers are independently tested and AHAM verified for CADR.

If you happen to already have any of these devices, Siegel said you don’t need to toss them out. They just may not be cleaning your air as thoroughly as you had hoped.

Tips for buying an air purifier