You Are Here Home Health News ‘It was scary’: Doctors warn of increase in children presenting with diabetic ketoacidosis during pandemic 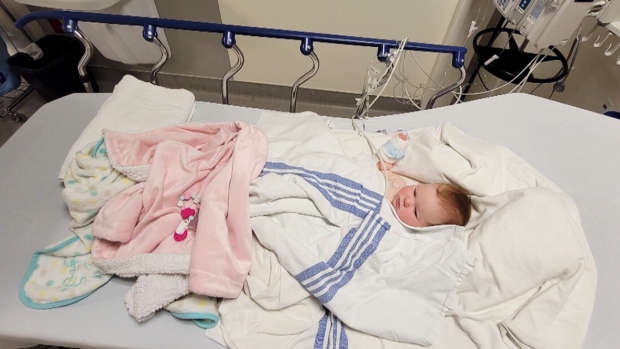 TORONTO — A few months into the pandemic, doctors including Elizabeth Sellers noticed a worrisome trend — more children arriving in hospital with a sudden and severe condition called diabetic ketoacidosis.

Also called DKA, it’s a life-threatening emergency that arises in those with undiagnosed Type 1 diabetes.

“I have a very clear memory of one of the long weekends in the summer being on call, and having four children present with new onset diabetes, all in severe DKA,” Sellers told CTV News. “So it really brought it home to me that, ‘Wow, I think we’ve got a problem here’.”

Sellers is one of the researchers behind a new study that surveyed eight pediatric hospitals across Canada, and noted a dramatic rise in cases of DKA during the pandemic. The study results were published in the journal Paediatrics & Child Health in April.

“When we looked at the first four and a half months of the COVID era — so, March to August last year — we saw that 55 per cent of children who are newly diagnosed with Type 1 diabetes presented [with] diabetic ketoacidosis, and that compared to 38 per cent […] the year before, in the pre-COVID era,” Sellers said.

Not only were there more children presenting with DKA, the condition was worse, researchers found.

“If they did present in diabetic ketoacidosis, they were in more severe acidosis,” Sellers said.

In 2019, within a similar time period, only “33 per cent of kids who presented [with] DKA were in severe DKA.”

So what is DKA, exactly? It’s when cells are unable to process glucose to be used as fuel. Instead, fat is broken down rapidly into another type of fuel, one that can make the blood acidic if it builds up.

That’s what happened to now-10-month-old Ainsley MacPherson, who lives in British Columbia with her family.

Her mother, Megan Black, told CTV News that they initially filed away what they now know were symptoms as being a part of her growing process.

“She was peeing through her cloth diapers at night and during the day, which was new for her, and she was also drinking more,” Black said. “I was going through six-ounce bottles quite frequently throughout the day, which also was a new thing for her.”

Then one morning, Ainsley woke up covered in vomit — something that raised red flags for her parents.

“We realized that things were not right,” Black said. “I took her out and put her in the bathtub, got her all washed up. While she was in the tub, she started going a little bit blue. Her hands and her feet started to go kind of purple-ish, and around her lips.

“It was scary for mommy and daddy.”

Ainsley was rushed to the ER, and then airlifted to intensive care, with her blood sugar level many times higher than normal.

“Her sugars were very high,” Black said. “I think her initial sugar or blood glucose was 44 or 45, which is really high. They’re supposed to be between six and eight for her for her age group.”

The family was blindsided.

“No one in our family has Type 1 diabetes, it’s not something that I had expected,” Black said. “And so to find out that my little baby, that I’m on that leave with still, has diabetes — it was a shock.”

Those who are diagnosed quickly, as Ainsley was, are put on insulin for their diabetes, and the problem is addressed before DKA can become severe. Her parents now regularly monitor her blood sugar levels, as you would for anyone with Type 1 diabetes.

If children’s diabetes is not caught early enough, and they present with DKA, they can end up with cognitive problems due to a swelling brain. In rare cases, DKA can be fatal.

“These children become very, very sick with severe dehydration and a buildup of acid in their blood,” Dr. Shazhan Ahmed, with the B.C. Children’s Hospital, told CTV News.

“And because of the severity of that illness, [they] present with decreased level of consciousness. Very, very dehydrated and almost always need an admission to the pediatric intensive care unit.”

Canada is not the only country where scientists have observed an increase in children presenting with DKA. The same trend of more serious DKA presentations in children has been reported in Germany and Italy as well.

Doctors suspect that the pandemic, isolation and fear may have played a role in children not being diagnosed with diabetes before DKA set in.

“You can imagine the fear that families feel to bring the child into a hospital [during the pandemic],” Ahmed said. “And so that delay in bringing their children to seek medical care has definitely impacted the rates of diabetic ketoacidosis.”

Researchers also suspect virtual visits may not allow doctors to pick up the more subtle signs of early diabetes, which, if untreated, can lead to DKA.

In light of this new research, doctors in Canada are urging parents not to ignore the early signs of Type 1 diabetes:

“Those are all signs of high blood sugars, and in a child, those are signs that they need to be seen on an urgent basis,” Sellers said.

Ahmed explained that although the majority of children recover from DKA, increasingly research is showing that there could be a long-lasting impact from DKA on children’s brain development.

“It’s very important that we take measures to prevent diabetic ketoacidosis, and diagnose diabetes earlier in children before they get sick,” Ahmed said.

Ainsley now has her Type 1 diabetes under control, and is “thriving,” her mother says.

“The insulin pump is doing its job, it’s keeping her sugars regulated.”

Black hopes that her daughter’s story can serve as a lifesaving example to other families to take symptoms seriously and seek medical care quickly.

“I really think it’s important for families, parents of little ones, babies and toddlers, even just young children, to know that it may not be that they’re just a baby and they’re just having a growth spurt, that they’re drinking more because they’re growing,” she said.

“Sometimes it can be a more serious […] thing going on.”

She added that parents should take any signs of illness that come on abruptly as a huge warning sign.

“For [Ainsley], it was literally an overnight thing,” Black said. “The night before, she was healthy, she was crawling around, she was happy, babbling and then, […] 12 hours later, she was lethargic, blue, and very, very ill.”

When she returns to work teaching third grade, she said she will now be looking out for these signs in her students, just to make sure that if another child is suffering, she can help catch it.

One thing that helped was the speed with which the family took Ainsley to the hospital when she began to appear ill.

“Not once did it have crossed my mind to not go into the hospital because of COVID and the pandemic,” Black said. “Right away we knew where we had to go for her to get checked out, regardless of what it may have been. But I do think certainly that would be a good explanation for there being an increase in DKA cases, that people are leery of being in the hospital with thoughts that they’ll get COVID.”

Doctors want patients and parents to know that in a time of crisis, seeking medical care is important, particularly when we’re dealing with an illness that gets worse if ignored.

“The objective is to prevent DKA by diagnosing diabetes much earlier in the disease, so that children aren’t presenting with DKA, they are not admitted to pediatric intensive care units, and that trauma that a family experiences with such a severely ill child is prevented,” Ahmed said.

“And based on the research around the world, we feel confident that we can achieve this in Canada.”