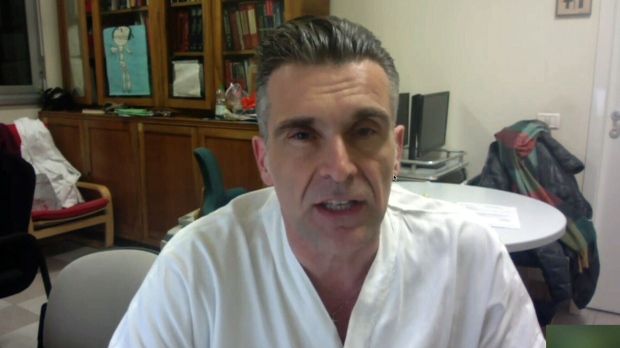 TORONTO — An Italian doctor on the front lines of the COVID-19 outbreak in his country suggests Canadian doctors remain vigilant when it comes to diagnosing patients.

Dr. Giovanni Guaraldi, an infectious disease specialist at the University of Modena and Reggio Emilia who works at a hospital that has seen 30 cases already, said the first case in the region was not properly diagnosed for four to five days because of a bacterial pneumonia, which led to several healthcare workers also getting infected with the virus.

It’s for this reason that Guaraldi suggests Canadian doctors should remain open to the idea that a concerned patient could have COVID-19.

“You cannot rule out SARS-CoV-2 infection just because you have contemporary bacterial pneumonia,” he told CTV News.

“Be very, very attentive in any case of interstitial pneumonia and any case of healthcare workers that may develop minimum symptoms, because at the very beginning of the epidemic you do not have information regarding the spread inside your country and so you expect all the cases will come from abroad.”

SARS-CoV-2 is the name of the virus, given to it by the International Committee on Taxonomy of Viruses. COVID-19 is the disease it causes.

Guaraldi said the virus has spread so quickly in his country that it’s forced the closure of several specialized clinics as staff treat the outbreak.

Latest figures in Italy show more than 2,200 positive cases of COVID-19 in the country which has been aggressively testing for the disease. There have also been 79 deaths.

Guaraldi said in his experience treating the infections, it’s mostly older people and, in particular the elderly, who show the worst symptoms. Those at a particular risk include those with cardiovascular diseases, lung problems and diabetes. Guaraldi added that he’s seen “very, very few” pediatric cases.

What makes containing the virus even more difficult, Guaraldi said, is that some patients in hospital can appear fine, but then start to rapidly show symptoms.

Guaraldi added that fortunately the majority of patients are only showing mild symptoms and can recover at home, while antiviral drugs being tested in China are being used on severely ill patients.

After working 18-hour days since the outbreak in Italy began some 10 days ago, Guaraldi said he’s noticed some useful practices Canadians can employ to handle a potential outbreak.

“Italian and Canadian health systems have got many similarities,” Guaraldi said. “So please take advantage of what has been the epidemic evolution in our country, in order to forecast what presumably may happen in your country.”

When it comes to planning for an outbreak, Guaraldi said healthcare professionals should have clear information on protocols and “very good coordination with public health departments.”

Italy has also been turned to telemedicine to help track and communicate with those in quarantine. This approach can help ease a log jam at health care facilities and reduces the risk of spreading infection.

“I think it’s very important to be prepared with a telemedicine approach with the possibility to have shared electronic system,” he said. “Otherwise the population get crazy, all the people who want to seek to be tested, any kind of fever is going to the hospital, that’s no good. It’s wrong. It’s dangerous.”

Guaraldi added that given the majority of patients who’ve tested positive for the virus don’t require a trip to the hospital, empowering them to track for their symptoms has eased the load on healthcare facilities.

Despite the added stress of handling the outbreak, Guaraldi said that he’s “very proud” by the work he and his team are doing.

“It’s also a big honour to work in this situation and be in touch with people trying to relieve their problem and trying to make them understand that this situation can be controlled,” he said.

Eggs reveal what may happen to brain on impact