This time, however, the change is for the better.

In 2006, Greene removed his army-issued helmet to show respect to a group of elders in a remote village.

Seconds later the blade of an axe, swung by a teenage boy, cracked his skull open and plunged five centimetres into his brain.

Greene suffered a debilitating brain injury which altered his speech, put him in a wheelchair and significantly impacted his ability to conduct the simplest of physical tasks.

Since that day in Afghanistan – with his wife and family at his side in their Nanaimo, B.C., home – Greene has made slow but significant steps towards recovery.

However, he recently hit a plateau in his treatment.

Despite walking with some help, utilizing a robotic exoskeleton and regaining much of his mental strength, he remains haunted with night terrors and could not sit with a door to his back.

Trevor, like so many Canadian veterans, suffers from post-traumatic stress disorder (PTSD). 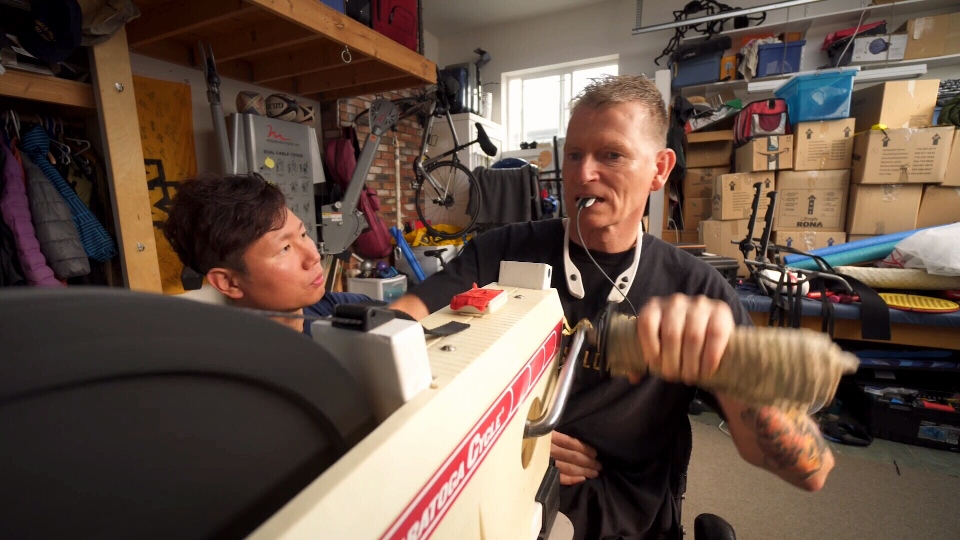 This is where the HealthTech Connex’s Centre for Neurology Studies and Dr. Ryan D’Arcy, Simon Fraser University professor and neuroscientist, enter the picture.

D’Arcy watched as Greene made gains from daily physical rehabilitation, but saw that the bridge between the soldier’s mind and body was still a vast expanse that needed a better connection.

“It’s not drugs, it’s not surgery,” said D’Arcy. “It just stimulates your tongue. It’s a hidden pathway to your brain.”

The doctor is talking about a new and experimental therapy called the Portable Neuromodulation Stimulator, or PoNS for short.

As Greene does daily physical and mental therapy he is now given a small device which fits inside his mouth.

Covered in electrodes, the scientific mouth-piece sends small electrical impulses into his tongue, and according to doctors, through to his brain.

The HealthTech Connex team says that the relatively new therapy pushes the limits of recovery in physical abilities, cognitive processing and PTSD symptoms.

“We don’t know yet exactly how it does this,” said Dr. D’Arcy. “But it facilitates neuroplasticity, or your brain’s innate ability to rewire itself.”

Essentially, doctors say this treatment can help rebuild the mind Greene had before his attack.

And the solider himself says it’s working.

“When I first started doing the PoNS they did a baseline of tests before I got it,” Capt. Greene told CTV News Vancouver Island.

“I’d kind of plateaued at that point. After the PoNS I blew away those results, those records,” he said.

Doctors say the wounded veteran’s ability to stand for extended periods of time has improved along with other physical tests.

But the mental side of things is where they are really seeing gains.

“It was amazing what we saw, his progress just shot up,” said D’Arcy.

According to Greene, the therapy’s ability to mellow his PTSD symptoms actually shocked him.

Greene says he now doesn’t feel penetrating anxiety if a book or pen falls behind him. He also says his ability to sit with his back to a door is getting better, though still not calmed entirely.

The Simon Fraser University-assisted team is still testing the limits of the technology, but hope cases like Capt. Greene’s will make it easier for others suffering to get help.

The results of Trevor Greene’s treatment have recently been published in the medical journal Frontiers in Human Neuroscience.

Their work was also the focus of a TEDx Talk entitled ‘Brains Unbroken.’