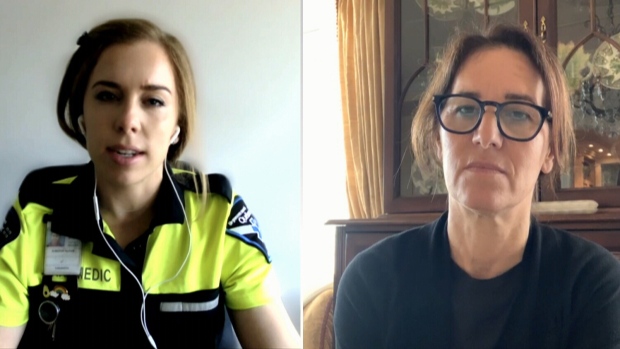 Rachelle Aubichon and Jodi Fellner, who both live in Montreal, say they have suffered from a range of symptoms, including fatigue, shortness of breath, hair loss, and chest pressure, among others, since they were first diagnosed with the disease.

“I still have those lingering symptoms. It’s a roller-coaster. One day you feel really OK and the next day, not so OK,” Fellner told CTV News Channel during an interview on Tuesday.

Fellner said she was diagnosed with COVID-19 in March after she returned home from Florida, where she had travelled to bring home her parents who had spent the winter there. She said she wasn’t aware her father had the virus when she was with him because he didn’t exhibit any of the symptoms at the time.

By the time they arrived in Canada, Fellner said, she had to quarantine at her parents’ house because they had all contracted coronavirus.

“My symptoms started off actually pretty OK. It was just some nausea and not feeling well and I thought, ‘Hey, if this is it, I think I can handle it.’ And then it slowly got worse and worse,” Fellner said. “I ended up with fever for 14 days, body aches.”

While her parents were able to fully recover from their illness after a short period, Fellner said she struggled to sleep, she had shortness of breath, pressure on her chest, and a sensation that someone’s hands are lightly around her neck all the time.

Last week, Fellner said she received a MRI test and her doctor discovered inflammation on her heart muscle and she was put on medication.

Like Fellner, Aubichon, the paramedic, is still dealing with the after-effects of COVID-19, but she’s less clear on how she contracted the disease. Back in March, she said she was working in a region with a high volume of cases, but she’s not certain she was exposed to the virus from a patient.

Aubichon said she initially experienced a burning sensation in her upper lungs while she was out running as well as a coarseness in her throat when she coughed. The next day, she had a runny nose and body aches before she developed a persistent fever that lasted 48 hours.

Aubichon, a paramedic, eventually lost her senses of smell and taste and became easily fatigued.

After testing positive for COVID-19 for 47 days, Aubichon said she finally tested negative, but her symptoms persisted and she even experienced new ones, such as sudden hair loss, weeks later.

“I sound good, I look normal again. But behind the scenes, I still struggled,” she explained.

Both Aubichon and Fellner shared their experiences with COVID-19 in the hopes that people will understand there can be long-term consequences of the disease.