You Are Here Home Health News Kingston, Ont., declares mask use mandatory at many indoor locations after COVID-19 outbreak 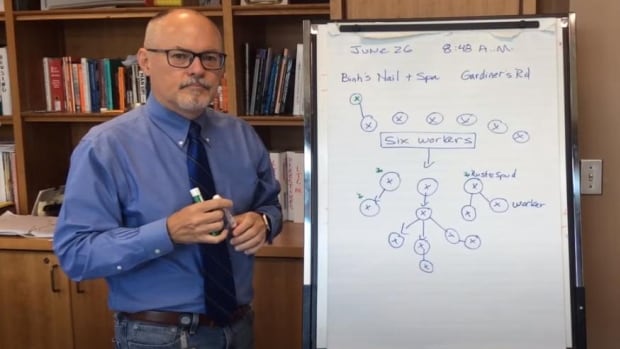 The city of Kingston, Ont., has decided to make mask use mandatory for workers and customers at many indoor public locations following an outbreak of COVID-19 at a local nail salon.

As of Friday afternoon, there were 16 confirmed COVID-19 cases involving people who work at Binh’s Nails and Spa, visited it or are connected to someone who did — almost a quarter of the area’s total known cases.

Kingston, Frontenac and Lennox & Addington Public Health declared an outbreak at the west-end salon Thursday and closed it until further notice.

On Friday, Medical Officer of Health Dr. Kieran Moore told reporters he’d signed an order requiring mask usage at a wide variety of establishments and public settings, including but not limited to:

“We have to learn from this event in our community, and we have learned the hard way. We are not blaming any particular business, but we must learn from this,” Moore said Friday afternoon.

“We think this is a proportionate response to the risk in our community, and we think our community will embrace this.”

Establishments that fail to make mask use mandatory could be fined more than $5,000, Moore said. The order will come into place when the clock rolls over to Saturday.

“We believe this is prudent, proportionate to the risk, and it’s very reasonable to embrace this now as a lesson learned.”

Medical Officer of Health Dr. Kieran Moore on the outbreak:

The 16 new cases — initially reported Friday as 18 but revised downward Friday afternoon — would mean the area has had 79 confirmed cases, just two of them in May and none in June until this week.

The public health agency said Thursday anyone who visited the salon after June 12, when it was allowed to reopen under Ontario’s Stage 2 of lifting restrictions, must get tested and self-isolate until 14 days after their visit.

Moore said he was “saddened” to learn the salon wasn’t following two-metre physical distancing rules nor cleaning properly between sessions. While workers at the salon were wearing masks, that wasn’t always the case with customers, Moore said.

The first confirmed new COVID-19 case involved a health-care worker who visited the salon, developed a fever and chills at work, went home and got tested, he said.

Other positive cases involve corrections workers, Moore said, although there was no indication the coronavirus had infected anyone in either a health-care or correctional setting.

None of the new cases had any travel history “outside of our community,” he added.

Ontario Premier Doug Ford said on Friday the outbreak is concerning, but shows the contact tracing system is working because they were able to quickly reach those hundreds of contacts.

A one-day, drive-thru testing site in the parking lot of St. Lawrence College in Kingston will likely be set up Sunday for anyone who may have a connection to the salon outbreak, Moore said.

“We knew this could happen,” he said. “I’m glad it happened early so we can learn from it.”