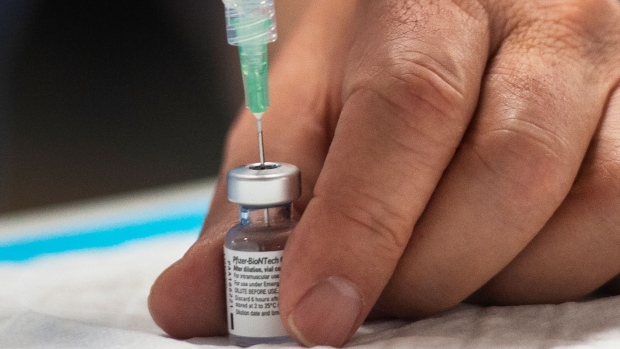 WINNIPEG — The Manitoba government announced on Wednesday that it expects residents to have their second dose of the COVID-19 vaccine by the end of July.

“For the second dose campaign, all roads point to by the end of July,” said Johanu Botha, operations, logistics and planning lead for Manitoba’s Vaccine Implementation Task Force.

“The differences between the low and high scenarios are quite negligible at this point.”

Second dose appointments will open to Manitobans with certain health conditions on May 21, likely at around 11:45 a.m. A full list of these conditions can be found below.

The province said it expects to further open up eligibility for second dose appointments at some point next week.

Botha said after health conditions, the second dose appointments will mainly be booked based on when the first dose was administered.

“The baseline approach and what I anticipate to be the main approach going forward will be announcing cut-off dates,” Botha said.

More information will be provided during a news conference at 12:30 p.m. CTV News Winnipeg will live-stream the event.