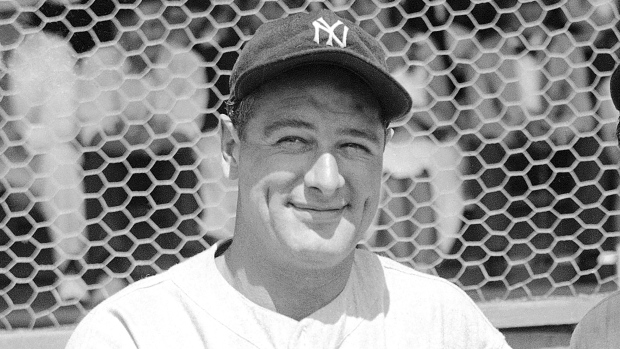 TORONTO — June is ALS Awareness Month and for the first time Major League Baseball is recognizing June 2 as Lou Gehrig Day in honour of the New York Yankee who died from the disease.

ALS, or amyotrophic lateral sclerosis, is a progressive neurological disease. It gradually cuts off communication between the brain and the body’s muscles, eventually leading to paralysis and death. There is currently no cure for ALS.

This is the first year the MLB is throwing its weight behind ALS Awareness Month, something that people with ALS and those involved in researching the disease are thrilled about.

“This is the greatest awareness opportunity we’ve ever had in the history of ALS so with awareness brings funding, funding brings research and with research brings the hope of treatment that will save people’s lives,” Taya Jones, a single mother of three who was diagnosed with ALS in 2018, told CTV’s Your Morning on Wednesday.

Researchers for ALS are also glad to see Major League Baseball declare Lou Gehrig Day in an effort to raise awareness for the terminal disease.

“This day is huge because MLB is something that ALS really needs for their awareness and certainly for the potential for fundraising,” David Taylor, vice-president of research for the ALS Society of Canada, told CTV’s Your Morning.

Funding is integral to being able to research the disease and find more treatment options and possibly a cure.

“The biggest barrier is that we need more effective treatments, which means we need more funding to understand the disease and get to the type of treatments that you would have for cancer or for cardiovascular disease,” said Taylor.

And with ALS being a terminal disease, getting treatment to Canadians as soon as possible is of the utmost importance.

“We need to make sure that the timeline between Health Canada approval and getting those in the hands of people living with ALS [is] as fast as possible. As you can imagine, with the terminal disease that is rapidly progressing, every day matters, urgency matters,” said Taylor.

For Jones, her three kids have become her caregivers as her disease progresses, and they’ve all been involved in raising awareness for ALS this month.

“We’ve had a lot of fun this past month, videotaping, making little video clips for Lou Gehrig Day because this is really exciting for us, it is a monumental day as we celebrate and learn more about ALS,” she said.

Despite being diagnosed three years ago, she didn’t fully explain it to her kids until this past December, but she says they’ve taken it in stride and stepped up to the plate.

“We sat down and had a really serious conversation about it and they have embraced it and they’ve been incredible,” she said.

Jones, who was previously an Iron Man competitor and marathon runner, is one of many athletic people diagnosed with ALS, something that researchers at ALS Canada are investigating for a connection.

“Anecdotally, we’ve seen this for years, we’ve seen that professional athletes, people who say they were in the best shape of their lives get diagnosed with ALS,” said Taylor. “The research shows that there may very well be a connection, but what this really highlights [is] that we still don’t know for sure, and that highlights the gross underfunding of ALS research.”

And finding more treatments could mean prolonging the life of people diagnosed with ALS, or even curing it.

“Upon diagnosis we are given a terminal illness that’s 100 per cent death rate right now. So the fight is on to find a treatment,” said Jones.

For Jones, it’s been a psychological battle as the disease takes away her ability to do everyday things, but she’s not letting it get her down.

“It cannot take my joy, it cannot take the attitude that I have towards the living that I’m going to live every day. I make the most of every day, and teach my children the skills that they need to have as adults because the inevitability right now, as it stands, they’ll grow up without their mom so we’re making the most of things, and gratitude really helps.”