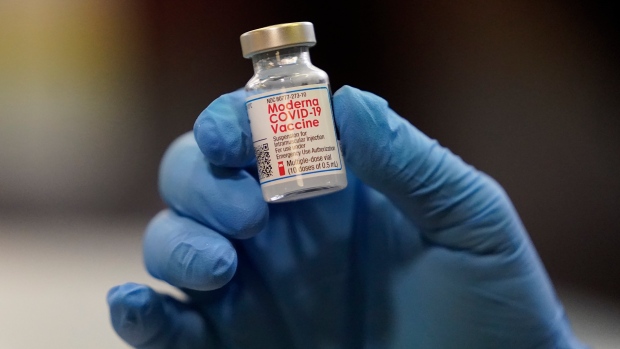 The company submitted data on a booster shot that is half the size of the doses used to give first and second shots of the vaccine so far.

Last month Moderna said there were signs immunity was waning the longer people got from their doses.

Public health and vaccine experts in Canada are leery of recommending booster shots for most Canadians because the vaccines thus far are showing to maintain strong protection against severe disease even if protection against infection at all is dropping.

The National Advisory Committee on Immunization said in late September a third dose of vaccine was warranted for people in long-term care homes or with compromised immune systems, similar to recommendations made by both the European Medicines Agency and the United States Food and Drug Administration.

NACI says many seniors and immune-compromised patients don’t mount as robust a response after two doses as younger or healthier people do, and many also didn’t benefit from a longer interval between doses.

NACI says evidence has shown stronger immunity in people who waited more than three or four weeks to get their second dose. Canada delayed second doses for millions of people because of a short supply of vaccine in the winter and spring, but by the time that decision was made most long-term care residents had already been fully vaccinated.

Health Canada says it received the application from Moderna and in a tweet said it is “conducting a thorough, independent and evidence-based review of the submission.”

Booster shots have also been controversial because of the inequitable distribution of vaccines between wealthy and poorer countries. Millions of people globally haven’t been able to access even one dose of vaccine, and the World Health Organization has asked countries to limit booster shots so other countries can access the vaccines as well.

The Our World in Data project says as of Oct. 1, about 30 million booster shots have been given out worldwide, in at least 16 countries including 11 million doses in Turkey, 4.4 million in the United States and about 3.5 million in both Israel and Chile.

This report by The Canadian Press was first published Oct. 6, 2021.