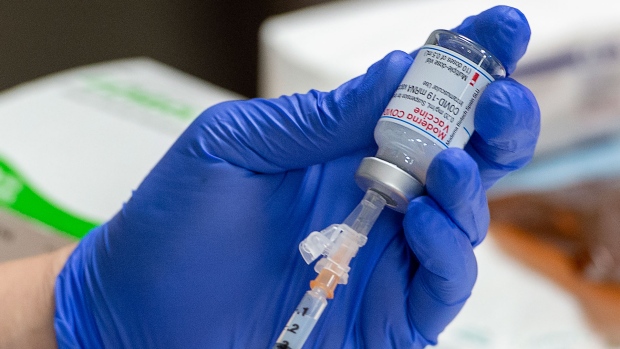 Kelly Grindrod was confused when she first heard of people leaving COVID-19 vaccine clinics once they realized they’d be getting the Moderna jab — a surprising turn that experts say suggests some Canadians are mistaking the product as inferior to its Pfizer-BioNTech counterpart.

Gridrod, a researcher and pharmacy professor at the University of Waterloo, says one clinic in her southwestern Ontario region reported around 50 walk-outs while other nearby sites saw daily instances of people refusing the Moderna shot, despite its similar effectiveness to Pfizer.

Walkout numbers decreased, she says, after clinics placed medical professionals at entrances to clarify the similarities between the two vaccines.

“At first it was like, ‘What is happening?”‘ Grindrod says.

“Now they’re getting a bit better explaining to people: ‘Look, it’s the same (type of vaccine as Pfizer).”

In clinical trials, Moderna showed 94.1 per cent efficacy in preventing COVID-19 two weeks after a second dose, comparable to Pfizer’s 95 per cent. Both trials saw zero hospitalizations and deaths in those who did get COVID-19 after being vaccinated.

Side effects from each of the mRNA vaccines have also been similar, Grindrod says, with neither producing more adverse events than the other.

So why have some people turned away from Moderna?

Grindrod expects it has to do with brand awareness.

Pfizer is a more recognizable name, she says, mostly because of its success marketing previous products including Viagara. But Moderna, a 10-year-old biotech company, is less well-known to Canadians, despite having serious star power in an investment from country superstar Dolly Parton.

Grindrod says Moderna’s vaccine, which was co-developed by a young Black scientist named Kizzmekia Corbett, has “a really great story.”

But Moderna’s profile has been overshadowed recently by news from other vaccines, including safety concerns around the Oxford-AstraZeneca product.

“People had a scare with (blood clots associated with) AstraZeneca and now they’re connecting safety with a name they recognize,” Grindrod says. “They were able to get comfortable with Pfizer, so it throws them for a loop if they show up (to a vaccine clinic) and it’s Moderna.”

Alberta has also experienced some Moderna walkouts, with infectious disease expert Dr. Lynora Saxinger saying by email that she’s heard that complaint from pharmacists and vaccine clinics there.

Dr. Sumon Chakrabarti, an infectious disease specialist in Mississauga, has heard the same happening in the Greater Toronto Area.

However, a provincial spokesperson in Manitoba said there were “no reports” of people leaving vaccine sites because of the type of jab offered, while Vancouver Coastal Health, a network of hospitals and clinics in B.C., said uptake of both mRNA vaccines has been high in that area.

Science communicator Samantha Yammine, who has a large social media following, has received “a lot” of questions recently from people unsure about Moderna.

She expects that’s because people hear so much more about Pfizer, with real-world data and studies emerging from countries that have relied more heavily on that vaccine.

“The more you hear about something, the more familiar it becomes,” Yammine says.

Doses of Moderna have accounted for less than 22 per cent of Canada’s deliveries to date — 5.5 million compared to more than 17 million from Pfizer. And there have been issues with unsteady supply from the company, which last month slashed expected deliveries to Canada in half.

Grindrod says that’s to be expected with a smaller business that doesn’t have the delivery logistics of a giant like Pfizer. Prime Minister Justin Trudeau referred to Pfizer this week as the “reliable workhorse” of Canada’s rollout.

“One of the key aspects of meaning-making is (defining) something by what it’s not,” she says.

While neither company has advertised its jab in a conventional sense, Benoit says, the mRNA products seem to have taken on a “Coke vs. Pepsi”-type rivalry that dismisses the similar effectiveness and science behind them.

Social media has played some role, Benoit says. As people post vaccine selfies with captions exclaiming which vaccine they got, they cement themselves as Team Pfizer or Team Moderna.

The prevalence of Pfizer in Canada makes that divide much more one-sided, however. And Yammine says we should be wary of that “familiarity bias.”

“Pfizer becomes more comfortable because you know more people who’ve gotten it,” she says. “But … that has everything to do with our supply and nothing to do with the actual quality of the vaccine.

“Moderna and Pfizer are very similar and they’re both amazing.”

This report by The Canadian Press was first published May 27, 2021.