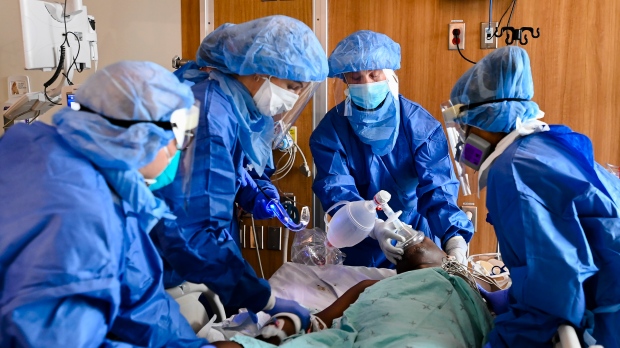 TORONTO — Nearly two-thirds of Canadians say they support health-care workers refusing treatment to threatening or disrespectful patients who are unvaccinated against COVID-19, according to a new survey from Nanos Research.

The poll, conducted by Nanos Research and sponsored by CTV News, found that 40 per cent of Canadians support and 24 per cent somewhat support health-care workers refusing treatment to these patients.

Nanos reported that British Columbia residents were more likely to support health-care workers refusing treatment at 50 per cent, compared to residents of Quebec at 29 per cent support.

Nanos also asked Canadians how they feel about current COVID-19 restrictions imposed on people who are not vaccinated, and whether they are too strict or not strict enough.

According to the poll, the majority of Canadians said that restrictions requiring people to be fully vaccinated to go to indoor public spaces (60 per cent) and back to a workplace (63 per cent) are “just right.”

The new polling from Nanos also found that 56 per cent of Canadians said staff of businesses should be responsible for ensuring that customers visiting their establishment are vaccinated, while one in five respondents (18 per cent) said it should be up to government employees.

Nanos conducted an RDD dual frame (land- and cell lines) hybrid telephone and online random survey of 1,017 Canadians, 18 years of age or older, between Sept. 30 and Oct. 3, as part of an omnibus survey. Participants were randomly recruited by telephone using live agents and administered a survey online. The sample included both land- and cell-lines across Canada. The results were statistically checked and weighted by age and gender using the latest census information and the sample is geographically stratified to be representative of Canada. Individuals randomly called using random digit dialling with a maximum of five call backs.