You Are Here Home Health News Nearly 300 people in Whistler have tested positive for COVID-19 in January, health authority says 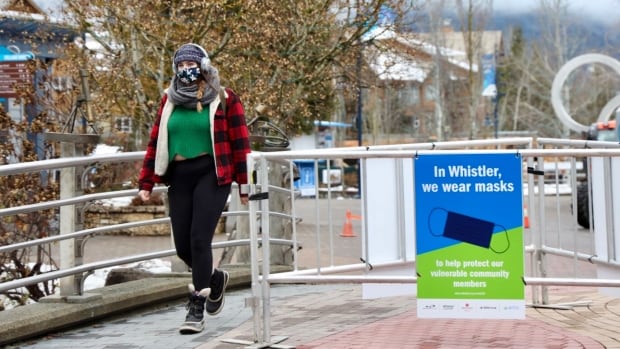 A COVID-19 outbreak in Whistler has now registered a total of 288 cases between Jan. 1 and Jan. 26, according to Vancouver Coastal Health.

In a public bulletin, the health authority said the majority of cases are connected to young people in their 20s and 30s who live, work and socialize together. None of the cases have resulted in hospitalization or death.

The news comes on the heels of the Fairmont Chateau Whistler confirming to CBC News that 12 of its employees had tested positive for coronavirus.

In a statement, the hotel said it is “working closely with Vancouver Coastal Health to follow the appropriate protocols to mitigate risk and ensure that our hotel remains a healthy and safe place for all who visit.”

There is a 48-hour hold on guest rooms between occupancy wherever possible, it said.

Earlier this week public exposure notices were issued for three more restaurants in the municipality, bringing the current number of Whistler businesses on the listed to six — more than half of the exposure notices listed in the Vancouver Coastal Health region.

According to the B.C. Centre for Disease Control, in the past two weeks, the number of COVID-19 cases per capita in the Howe Sound region has been two to 13 times higher than anywhere else in southwest B.C., with nearly one per cent of the region’s population becoming infected in that time.

The Howe Sound region ranges north from Squamish through Whistler to Pemberton.

After three Whistler establishments were listed on Vancouver Coastal Health’s public exposures list on Tuesday, another three were listed on Thursday morning.

Vancouver Coastal Health says anyone who was at the following venues on the given dates may have been exposed to an infectious person:

The health authority says the exposure risk is believed to be low, but is asking people who attended these businesses during the listed dates to self-monitor for symptoms.

Eric Griffith, the chair of Whistler’s restaurant association and owner of Alta Bistro in Whistler Village, says everyone in the village knows someone who has COVID-19, which wasn’t the case a month ago.

Griffith says the Whistler labour force, often temporary workers who live together in multi-family households, can make it easy for the virus to spread.

“It’s tough when people are living together. We have a lot of group living situations in Whistler, as a lot of people know,” Griffith said.

Resident Stacy Kohut, who works two retail jobs in Whistler, agrees that housing has played a major role in the spread of COVID-19 in his community.

“It’s the 19 kids stuck in the five-bedroom house that’s the problem,” he told CBC’s Stephen Quinn.

“We’ve got greedy landlords up here and we have people that are sticking way too many people into houses. Nineteen people in a five-bedroom place — you don’t think COVID’s going to spread around like that?”

Another Whistler resident, Stella Harvey, said the many people who live together usually work in different places, which contributes to the spread of the virus in the community.

“It’s definitely a problem,” she said.

Whistler Mayor Jack Crompton drew attention to the rising number of cases in the municipality in a recent Facebook post.

“The virus is insidious,” Crompton said Thursday on CBC’s The Early Edition.

When asked about out-of-towners travelling to the resort community, Crompton said his message has been clear for sometime: people should stay home.

“In my view, we don’t have an economy without getting to the other side of this pandemic,” he said about balancing business needs with public safety.

The mayor also reiterated that people should not plan on visiting the resort during the upcoming Family Day long weekend if they are not local.

Provincial Health Officer Bonnie Henry, also speaking on CBC’s The Early Edition Thursday, was clear that when it comes to Whistler, local does not mean people living elsewhere the Lower Mainland — and those who do should head for the North Shore ski hills instead.

“We need to take the responsibility right now to not travel in the province,” said Henry. “It’s not the ski hill that’s the problem, it’s the parties that are happening in and around that … we need to step back from that.”