You Are Here Home Health News No decision on easing COVID restriction until at least March 1, Alberta’s top MD says 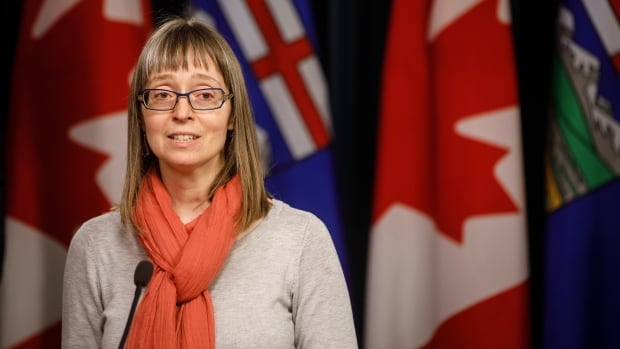 “Businesses have asked us for a week’s notice to be able to prepare, and so that’s something that we will strive to do,” Dr. Deena Hinshaw, Alberta’s chief medical officer of health, said Monday at a news conference.

The decision to loosen restrictions will be made on March 1 or later, she said, as public health officials watch to see how the numbers are trending over the next several days.

“And so businesses should be planning for a re-opening as early as the following week,” Hinshaw said.

The province reported 273 new cases of COVID-19 on Monday and another 16 deaths from the illness.

Though the deaths were reported to Alberta Health over the last 24 hours, 10 of them happened in December, one in January, and four in February.

There are 4,675 active cases in the province, with 324 patients being treated for the illness in hospitals, including 53 in ICU beds.

R-value on the rise

Hinshaw provided her 174th update about the pandemic on Monday, and used the opportunity to highlight some progress and offer some cautions about trends in recent days and weeks.

When the reproduction number is greater than one, case numbers are rising.

It has been two weeks since the province launched Step 1 of its phased re-opening plan, easing restrictions on businesses and outdoor social gatherings. If the number of people in hospital remains below 450, further restrictions could be lifted.

“I know that many people have questions about when Alberta will move to Step 2 of easing restrictions,” Hinshaw said. “We are below the Step 2 threshold of hospitalizations but we have seen growing cases in recent days.

The province is being “cautious” with its approach to reopening, she said, and it’s too early to say if the recent increase in new cases is significant or whether the downward trend seen over the past several weeks will continue.

“When cases start to grow, if that’s sustained over time, then we can get into a situation like we were in in the fall. And that’s why we need to take the full three weeks, to be able to look very closely at where those numbers are coming from. Are there patterns? Are there things that we can do to be able to target particular locations?

Hinshaw pointed to progress made in long-term care facilities, whose residents have been among those most at risk and account for about two of every three deaths.

The number of long-term care outbreaks with active cases has dropped from 74 on Dec. 20 to five on Feb. 16, she said.

“Every one of us should take pride in this turnaround, as it is the result of not only our immunization campaign but also of our collective efforts to bring our new case numbers down.”

The same steep decline has been seen in designated supportive-living facilities, Hinshaw said. On Christmas Day, the province reached a peak of more than 1,300 active cases in those facilities. Over the last seven weeks, cases in such facilities have declined by 88 per cent.

“These emphasize for us both that the public-health measures have worked and that vaccines can have a tremendous protective effect for those who are most at risk.”

The province has also seen a downward trend in the number of deaths reported, she said, from averaging a high of 167 deaths a week at the end of December to 23 reported over the last seven days.

A total of 1,843 people have died from COVID-19 in Alberta since the pandemic began.

There are now 289 variant cases confirmed across the province, with 116 in the Calgary zone and 110 in the Edmonton zone.