TORONTO — A Toronto company isn’t waiting for a government vaccine passport mandate — it says it’s getting an app to market soon that would give any venue the chance to scan and quickly verify its customers’ vaccination status.

Asif Khan of Vector Labs says the Canatrace Perimeter app is similar to the one being rolled out by the province of Quebec — but would allow businesses in jurisdictions where there is no provincial mandate to vet their own customers.

“Quebec and Manitoba and B.C. have come out with some sort of announcement that the government is providing a solution. Here in Ontario, obviously we’ve heard that they’re not. And so they’re relying on the private sector to do that,” Khan said.

“Businesses are looking for someone to step up and give them guidance. We’re simply saying, ‘Here’s a solution, and it’s free,’” he said.

Khan said people can use the app to directly download proof of vaccination from government sites using their health card information.

The vaccination information on the app can be verified by a business — but that business doesn’t get access to any personal details.

“This is being done in a digital, secure, privacy-compliant framework,” he said.

It’s one of many vaccine passport apps in development in some parts of Canada, aiming to meet the needs of governments and businesses trying to keep customers safer.

In Quebec, there are two: Vaxicode allows users to upload proof of vaccination. Venues then use its partner, Vaxicode Verif,to check it. It started to be available for download on Wednesday.

“Where this is put into place, vaccination goes up. We’ve seen this in jurisdictions around the world,” said palliative care physician and health care activist Dr. Naheed Dosani.

“Vaccine certificates should be seen as a pro-business, pro-economic intervention that will actually allow us to move on through the pandemic and allow businesses to thrive, stay open, and keep their customers healthy,” Dosani said. 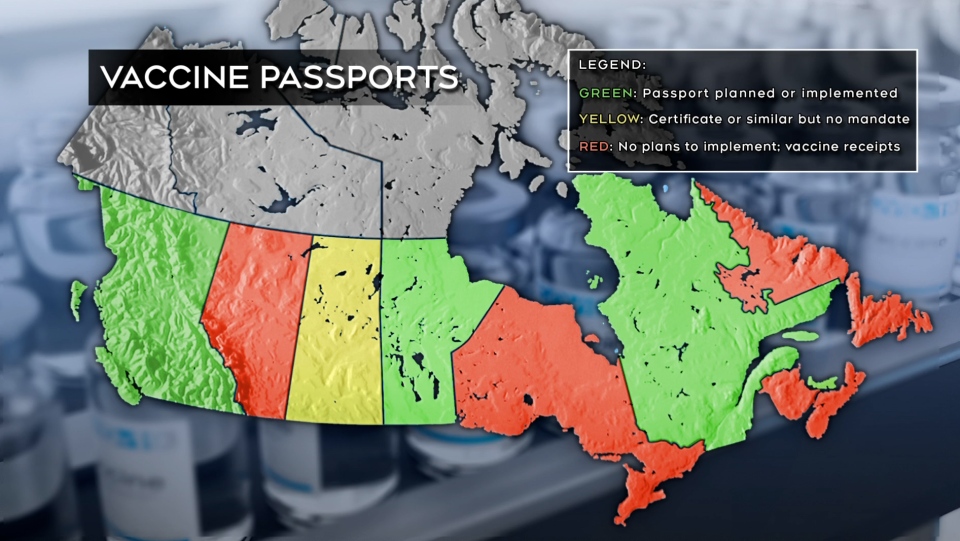 The provinces in green announced a vaccine passport plan, with proof soon to be required to enter many businesses and sporting events.

The provinces in yellow offer a centralized certificate with no mandate. The provinces in red have said they have no plans to implement a passport, or offer only receipts of vaccination.

Ontario offers vaccination receipts, which say how many vaccines a person has received, but there’s no larger system in place. The Canadian government has said it will roll a system out for use at the border which could be adopted by the provinces internally.

Vector Labs also runs a series of vaccine testing labs, and has built the Canatrace Perimeter app, as an extension of the Canatrace app, which offers contact tracing in some 8,000 businesses coast to coast, Khan said.

Khan said the app has been built and is now waiting for approval from the Apple app store.