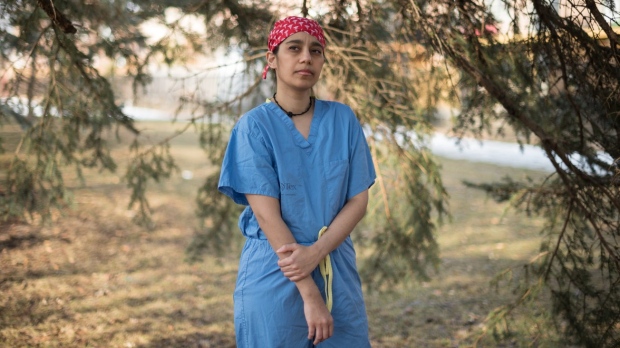 MONTREAL — COVID-19 cases continue to roll into the two Toronto-area hospitals where Eram Chhogala works as a trauma nurse. The numbers have dwindled to a stream instead of a wave, but each is a reminder of what the disease has done and could possibly still do.

“Previously, we had high numbers and waves where people came in heavy bottlenecks, and I’m just wondering if it’s going to be the same thing again,” Chhogala said in a phone interview this week. “You know, it’s the wonder of, ‘Is this going to happen again?'”

With mask mandates and other COVID-19 health restrictions lifting, many Canadians are finally able to envision a return to normal life. But, as they face burnout, staff shortages and daunting procedural backlogs, some health workers say it isn’t so easy to move on.

Chhogala says she understands people’s desire to return to a more normal life. But she also worries that health measures such as mask mandates are lifting too quickly, while there’s still so much to do to ensure the health system is ready for another wave.

“A lot of people are probably really excited that they can go back to normal again, but I just don’t think that we’re at that normal yet,” she says.

Chhogala, 36, says no health worker has emerged unscathed from the pandemic.

They have had to watch wave after wave of very sick people struggle and die, she said. Many fell ill themselves. Some of her colleagues burned out and left the profession or plan to take early retirement. Later in the pandemic, health workers were harassed by anti-mask and anti-vaccine protesters.

Perhaps most devastatingly, Chhogala’s own father died of COVID-19.

“It changed the way we think, feel and act,” she says of the pandemic.

“While governments and Canadians are hoping to move past the pandemic, an exhausted, depleted health workforce is struggling to provide timely, necessary care to patients and make progress through a significant backlog of tests, surgeries and regular care,” CMA president Katharine Smart said in a statement following an emergency meeting.

Among the challenges the system faces is a backlog of delayed surgeries and procedures that could take years to clear.

A report by the Ontario Medical Association last month found that the backlog in that province alone was more than one million surgeries. Manitoba’s delay had grown to over 161,000 diagnostic and surgical procedures as of mid-February, according to Doctors Manitoba, a group representing the province’s doctors.

In Quebec, hospitals across the province had to reduce surgeries by about 50 per cent at the height of the Omicron wave. Dr. François Marquis, the chief of intensive care at Montreal’s Maisonneuve-Rosemont hospital, says it will take months for the hospital to bring surgical waiting lists to their already daunting pre-pandemic levels.

Now that the number of COVID-19 patients has declined, officials are shifting to a different set of challenges: rebuilding the team, reopening beds and catching up on surgeries.

“The hospital is not working full speed,” he said in a phone interview. “There are not enough surgeries, there are not enough patients being admitted. You still have rooms that are closed because we don’t have enough nurses and (respiratory therapists).”

Marquis says catching up is a challenge, given the number of nurses that have retired, left the field or transferred. But by working efficiently to streamline procedures, he’s happy to say that the hospital hasn’t cancelled a single surgery in recent weeks.

Despite rising COVID-19 cases in some parts of the world, Marquis says he isn’t worried about the spring or summer, when respiratory viruses typically subside. Fall could be “a challenge,” but he hopes that the public’s willingness to adopt masks and — hopefully — a vaccine that protects against both COVID-19 and the flu, could lessen the impact.

“I’m naturally optimistic,” he said. “I think you have to be to be a critical care specialist, because if you see everything on the dark side, you’re not going to survive very long in the field.”

Naveed Hussain, a nurse at Montreal’s McGill University Health Centre, says the last two years have left him feeling exhausted and frustrated that so little seems to have changed in how governments approach health care.

“We’ve seen a lot of reactionary measures, but we haven’t seen anything that’s been preventive, been put in place to be ready for the next wave or the next pandemic that might occur,” he said.

Hussain helped train the patient attendants hired by the Quebec government in 2020 to work in long-term care homes and says some of them have already left the field due to a lack of support.

He said the government desperately needs to invest in both health-care infrastructure and its workers, through better training, mental health support and improved working conditions.

Like most of the population, he was happy to see restrictions ease and normal activities resume. But with cases rising in China and Europe, he can’t help but worry about what lies ahead.

“You know that there’s something coming around the corner and, as health-care professionals, we know that’s the reality,” he said. “And we know that we’re going to have to be prepared again for the fight, because this thing isn’t over yet.”

This report by The Canadian Press was first published March 18, 2022.