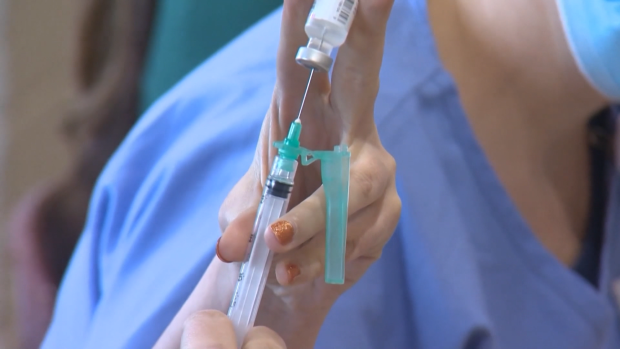 EDMONTON — Nearly 75 per cent of eligible Albertans have received their first dose of a COVID-19 vaccine, but the province is having trouble getting the rest to follow suit.

First-dose uptake has been dropping since May, with Sunday marking the daily lowest amount administered since February.

“With any sort of campaign, you’re going to see an initial push and big uptake, because it’s novelty. Now we’re in the hard slog,” said Dr. Cheri Nijssen-Jordan, co-lead of the AHS COVID Vaccine Task Force.

“This is not surprising from my perspective that we would have to work harder for that last 10-20 per cent, especially in some of the age groups.”

Albertans between 12 and 18 are one group the task force is hoping to see vaccinated before school begins in September.

The other age groups “lagging” behind the others is the 20-29 and 30-39 groups, according to Nijssen-Jordan.

Messaging being sent out to encourage and inform people about vaccines is being tailored to those groups. The task force has also been working with universities and the Hutterian Safety Council to encourage vaccine uptake.

“We are using temporary clinics, mobile clinics, drive-thru clinics, advertising campaigns and much more,” said Tom McMillan with Alberta Health. “There are more than 1,400 pharmacies offering the vaccine, along with hundreds of AHS clinics and physicians’ offices.”

There are more than 280,000 vaccine appointments booked for the next 14 days, added McMillan.

“We are a national leader in second doses… we have higher immunization rates than the United States, Germany, Italy or France, among others,” said McMillan.

Experts reiterated the need to get a second dose of a COVID-19 vaccine. More than 60 per cent of eligible Albertans have received their second dose.

“In order to develop enough immunity in our population, especially with some of these variants, we really need to get closer to that 90 per cent or, if possible, over,” said Nijssen-Jordan.

Experts call the reasons some have not gotten vaccinated complex, including lack of access, lack of trust or religious beliefs.

“There is no one-size fits all solution to vaccine hesitancy, and to imagine that there is one is stupidity,” said Dr. Ubaka Ogbogu, a health law professor at the University of Alberta.

Data from the province shows that vaccination rates in rural Alberta are lower. The Edmonton and Calgary areas are sitting at the 60-80 per cent rate for first doses.

The government is actively encouraging Albertans to get vaccinated, but experts worry the current public health policy and messaging is counterproductive.

One public health expert found a recent video tweeted out by the premiere “frustrating.”

“It really tried to give the impression it (the pandemic) is over,” said Tim Caulfield. “From a public health policy perspective I think it could be really damaging.”

Variants of concern, including Delta, account for more than half the active cases in the province. The Delta variant is the dominant strain in the U.S. and the U.K., where cases and deaths are on the rise.

Over 5,000,000 doses of a COVID-19 vaccine have been administered in Alberta, according to provincial data.