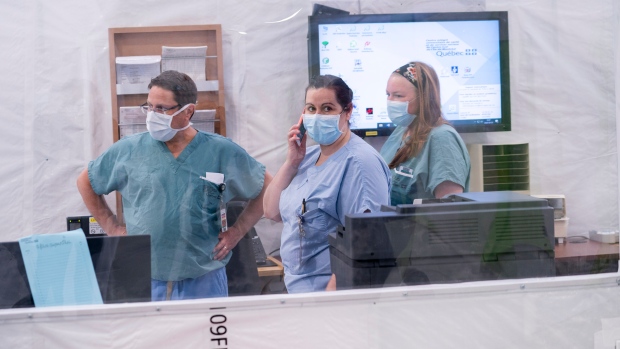 TORONTO — Hailed as heroes during the first year of the COVID-19 pandemic, front-line health-care workers say they appreciate hearing the kind words, but don’t feel that they’re being heard themselves.

“We know that burnout has always been something that nurses have dealt with and faced, but it’s turned a corner with COVID-19,” Amie Varley said Thursday on CTV’s Your Morning.

There has been a steady drumbeat of data warning about mental health challenges facing health-care workers during the pandemic.

Last September, 41 per cent of nurses surveyed in British Columbia said they were suffering from severe depression, while 60 per cent reported emotional exhaustion. Nationwide, warnings about burnout escalated along with the second wave. Multiple health-care workers have died by suicide, including Dr. Karine Dion in Granby, Que.

Every time health-care workers speak publicly about what might be driving this crisis, the same refrain is repeated. They say inadequate staffing levels are leading many of their colleagues to work far more hours than is healthy for them at their extremely demanding jobs, with little to no support from their employers when their mental health starts to suffer.

The lack of action on what Varley describes as an imminent “breaking point” prompted her and Sara Fung, both of whom are nurses working in Ontario, to start the “Gritty Nurse” podcast, where they discuss the serious issues hanging over Canada’s health-care system.

They’re using their platform to advocate for what they see as straightforward changes that could drastically improve the mental health of health-care workers across the country.

Among the items at the top of their list are paid sick days and mental health leave. Beyond the toll it takes on workers’ mental health, lack of paid sick leave in the health-care sector has been cited as fuelling the spread of COVID-19 itself.

Fung told CTV’s Your Morning that it is “nearly impossible” for many front-line workers to get time off for stress leave or access proper supports.

In Ontario, the provincial government has dismissed calls to implement a paid sick-leave program, arguing that it would duplicate a federal program that pays those who miss work due to sickness up to $500 per week, to a $1,000 maximum.

Critics charge that the federal program does not do enough to meet workers’ concerns, because it does not include any form of employment protection. As a result, Varley said, some health-care workers show up for their shifts despite being physically and/or mentally unwell, because they feel they have to choose between their health and their job.

“Those things shouldn’t be on the forefront of our minds,” she said.

“We really want to protect people, and paid sick days is one [way to do that].”