Obtaining the Campaigns list from the server has failed!
Server response:
CM Ad cahger Server plugin is not active on https://legendarygroup.co/admanager/
You Are Here Home Health News Nutrition warnings are coming to the front of some packaged foods in Canada 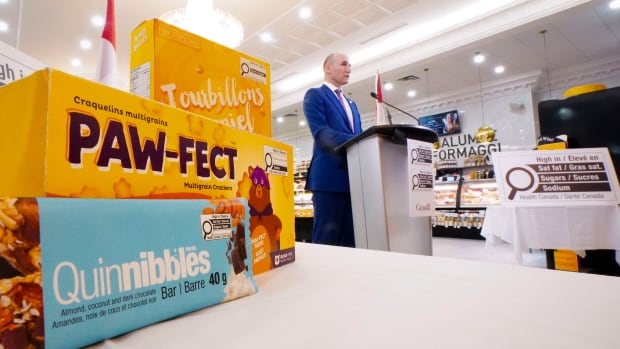 Canada will require that companies add nutrition warnings to the front of pre-packaged food with high levels of saturated fat, sugar or sodium in an effort to help grocery shoppers make healthier choices with just a glance.

But ground meat will be exempt from the labels, after ranchers groups objected to Health Canada’s proposal earlier this month.

The government says the labels are meant to help Canadians eat healthier, as the so-called “nutrients of public health concern” have been linked to conditions such as cardiovascular disease and Type 2 diabetes.

“These regulations are designed to make it easier for us to make informed, healthier choices,” said Health Minister Jean-Yves Duclos.

Health Canada said the new labels will complement, rather than replace, the more detailed nutrition information that’s typically on the back of food packaging.

The proposed labels were at the centre of controversy earlier this month when a group of ranchers opposed the government’s plan to include warnings on ground meat.

At the time, the Canadian Cattlemen’s Association said the policy would “vilify” ground meat and make people think it’s a less healthy choice than whole cuts.

Now, Health Canada has exempted ground meat from the warning labels, even if it’s high in fat or salt. The product was deemed to have health benefits in spite of the “nutrients of concern,” along with milk, many cheeses and fruit.

Packages of sugar and salt will also be exempt, as the government said including labels on such products would be redundant.

The rules are set to come into force at the beginning of 2026, which the government said gives companies ample time to manage the costs of adjusting their packaging.

Health Canada will also limit the size of “voluntary health-related information,” such as labels that proclaim an item high in fibre.

These charts show nurses are doing more OT than ever. They say it’s driving many from the profession

Doctors in Toronto treat man with Parkinson’s disease at his home in N.L. Here’s how they did it