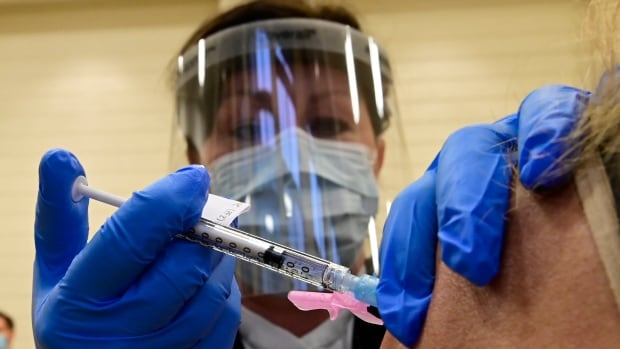 Manitobans 95 and older and First Nations people 75 and over can now book appointments for the COVID-19 vaccine, the government announced Wednesday.

Given that some elderly people might have difficulty booking appointments for themselves, family members and caregivers can call to make appointments for someone else, as well as accompany them to the clinic.

People calling will need to provide the number on the health card of the person getting the vaccine. The number to call is 1-844-626-8222.

This is the first time members of the general public, outside of congregate living settings or certain front-line professions, have become eligible to receive the vaccine in Manitoba.

To manage the anticipated influx of calls, the number of phone lines at the call centre has been increased to 2,000 and there are 370 trained agents to take bookings, Reimer said.

“We know Manitobans are eager for this moment and many of you are going to want to call right away,” she said, but asked Manitobans for patience and to only call if making an appointment for an eligible person.

Appointments for first and second doses will be made a the same time.

When calling, people will first get an automated voice recording for initial eligibility screening.

If they pass that, they will proceed to an agent who will ask a more detailed set of questions to confirm eligibility. People will be asked to provide a phone number or email address, although agents will still book an appointment if those aren’t available.

An online booking process is in the testing phase. That system will require an email address and public health information number.

The province also continues to ramp up vaccination capacity, with a goal of being able to administer 20,000 shots a day.

The next immunization supersite planned for Manitoba will be at the former Selkirk and District General Hospital at 100 Easton Dr. in Selkirk. It is set to open in early March and will serve as a hub for the Interlake-Eastern health region.

Another supersite serving the Southern Health region will be in the Morden-Winkler area, opening sometime in mid-March. Officials have not yet announced the exact location.

Right now, people who self-identify as First Nations will not be asked to provide proof, but that will eventually change, said Dr. Marcia Anderson, lead for the Manitoba First Nations pandemic response team.

“This would be more in line with Indigenous rights and would respect the ways that colonization has served to disenfranchise First Nations people,” she said.

However, there are those who would take advantage of that, she said.

“Too often, we see the pretendian phenomena, where people falsely identify as First Nations, or provide distant or tenuous ancestral connections for personal gains.”

When people call to book an appointment, they will be asked if they self-identify as First Nations. If they do, they will then proceed to an agent with specialized training to confirm their identity.

Eventually, if a person doesn’t have a status card, they will be asked to provide one from a first-degree relative, such as a parent, grandparent or sibling. If this isn’t possible, then there will be “an escalation process to deal with these cases in a trauma-informed and culturally safe way,” Anderson said.

“This process is not perfect, but it will help make sure that First Nations people do have access to the vaccine as soon as possible, and it will help us save the vaccine for those who are most at risk.”

The pandemic is disproportionately affecting First Nations people in Manitoba, who account for two-thirds of all active COVID-19 infections in the province.

That is one of the key reasons Manitoba has prioritized First Nations people in its COVID-19 vaccine rollout strategy.