Obtaining the Campaigns list from the server has failed!
Server response:
CM Ad cahger Server plugin is not active on https://legendarygroup.co/admanager/
You Are Here Home Health News Once told he wouldn’t graduate high school, doctor to be first Indigenous president-elect of CMA 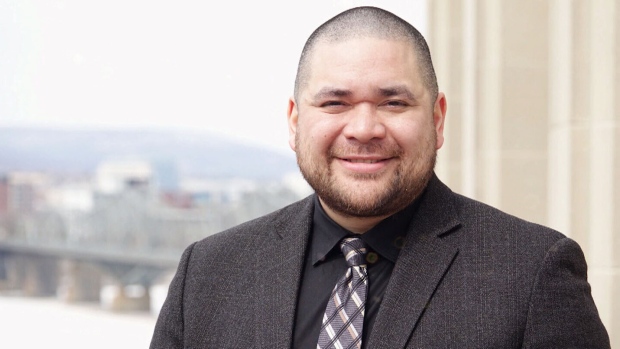 TORONTO — The road has been a long one for Dr. Alika Lafontaine, a successful anesthesiologist, and now the first Indigenous president-elect of the Canadian Medical Association (CMA).

From struggling in school to rocking out in a band to taking on this new responsibility at the CMA, he says he’s been supported every step of the way by family and mentors.

“I’m really excited about the next few years, about the opportunity that I’ll have to create that space […] in the same way that people in my home life created space for me,” Lafontaine told CTV News.

Lafontaine, who was born in Treaty 4 territory in southern Saskatchewan, now works at a hospital in Grande Prairie, Alta.

It hasn’t been an easy path. As a child, he says he was written off by teachers. He had a stutter, and was labelled developmentally delayed.

“When I was in grade school, I remember my parents and I being invited into the school administrator’s office and they sat us down,” he said. “They actually told my parents I’d never graduate high school.”

After the meeting, Lafontaine and his parents sat in the car, and his mother hugged him.

“I think that’s an experience that a lot of racialized families went through during that timeframe. You know, you were labelled with some sort of problem and as a result, there really was no future for you.”

He said when he looks back on his life, he can trace his determination to succeed to that moment.

This month, at the CMA’s annual meeting, where they discuss challenges and goals for the future, they will ratify Lafontaine’s nomination, after which he will officially be president-elect of the CMA.

His presidency will begin in August 2022.

Lafontaine’s nomination was announced earlier this year in a statement from the CMA, which noted that as well as being one of the first Indigenous nominees, Lafontaine was the first CMA president nominee who is of Pacific Islander descent.

The association highlighted in the announcement that one of Lafontaine’s achievements was co-leading the Indigenous Health Alliance from 2013 to 2017, a “health transformation project” involving 150 First Nations and several national health organizations.

FAMILY BY HIS SIDE

A key element of his success has been his parents’ unconditional support, he says, which shaped his life.

His mother Manusiu, an immigrant from the Pacific Islands, and father Christopher, a university instructor of Cree and Anishinaabe background, were determined their son would exceed the low expectations his elementary teachers had for him.

His father told CTV News that they knew their son was bright.

“That is what we have done over that period of time, is to assure our Alika that he is going to be fine, that we as parents will find a solution for the problem,” his mother said.

Both parents had experienced racism and discrimination and were determined that Lafontaine and his four siblings would go into fields that would allow them to give back to their family and community, his mom even picking out his job — “doctor” — when he was still a child.

“We do have dentist, we do have a lawyer, we do have a person that works in the hospital, and [our] daughter is a chemist,” Manusiu said proudly.

Lafontaine said part of it was the “classic ‘wanting a doctor in the family,’” but that he thinks it was also about having a person they could trust who would be able to provide medical advice.

“As a family with mixed ancestry, there’s challenges within the healthcare system that we come across that patients who don’t have that same sort of background often take for granted,” Lafontaine said.

In order to ensure that Lafontaine would have the bright future his parents envisioned for him, his mother stayed home and homeschooled him. He was enrolled in Tae Kwon Do, where he would eventually earn a black belt.

His parents taught him about his Pacific Island culture and Indigenous heritage to give him a strong sense of self.

“Those are important in his life,” his mother said. “And those are things that will help him navigate through racism, if he understands himself, he feels good about himself.”

He also played in the family band — called the 5th Generation — for many years, which gave him confidence.

“There’s nothing that supports the self worth of a young male than having a crowd of people screaming,” Lafontaine said.

Travelling to different communities while on tour also helped him learn how to relate with people from all walks of life.

“Being in the band really taught me to hear and understand people,” he said.

He still encountered struggles in his first year of medical school. But Lafontaine credits his mentors as champions on his journey to reach his goal.

“My chemistry professor, who recently passed a few weeks ago, [is] really the only reason why I did a Bachelor of Science,” he said.

When he was feeling low in medical school and thinking about dropping out, another mentor introduced him to the dean, who had lunch with him and encouraged him to continue.

“I’m very convinced that I’ve really been surrounded by a collection of people that, for whatever reason, saw me as something more than I saw myself,” Lafontaine said.

“I think me getting through [the hardships] had so much to do with the people around me.”

WORKING FOR OTHERS IN HEALTHCARE

Fuelled by an urge to help others, he fulfilled his mother’s wish to become a doctor.

But through his work, he continued to experience and hear about troubling stories, including mistreatment of Indigenous patients in the health system.

He even saw his brother — dentist Dr. Kamea Lafontaine — struggle to get appropriate care in hospital for a serious condition.

In a sobering conversation, his brother said to him: “At the end of the day, doesn’t matter my education, it doesn’t matter, what I do for the community, or my reputation.

“When I put on that gown. I became just another Indian.”

The conversation was a catalyst for change, prompting them to launch Safespace — a website and app where patients can anonymously report racism in their medical care. The Safespace Networks pilot project also partnered with friendship centres in B.C.

“We have issues with systemic racism in healthcare system, we see systemic racism in the criminal justice system, in the educational system, I think Alika is the right person for the job […] to bring the Canadian Medical Association to the next level,” he said.

Lafontaine knows his voice matters even more as he takes the helm of the CMA.

And he’s coming into the job with clear goals.

He said it’s important to deal with “not just racism but also sexism, and classism, ableism, and all the different ways that we disempower patients and colleagues.”

He also wants to look at how we treat those that work in medicine.

One of the issues with talking about “healthcare heroes,” as we have learned throughout the pandemic, is how dehumanizing that kind of regard can be.

“Packaged in with that is this idea that it’s okay for someone to sacrifice everything that they are in order to keep the system sustainable,” he said, adding that he wants to look at “how can we change work environments in order to decrease burnout.”

He said that being Indigenous allows him to bring a unique perspective, but it’s not the only thing he brings.

“But even more importantly, because I’ve been disempowered by in my life. I know how to create space,” he said. “I understand how to amplify other folks who want to share their experiences, but maybe don’t know how.”

And as he prepares for the new challenge of advocating for doctors and Canadian health care in the midst of a pandemic, he’s looking towards the future.

“I think leadership is really about creating the next leaders,” he said. “I’m really excited about the next few years, about the opportunity that I’ll have to create that space in the same way that people in my home life created space for me.”