You Are Here Home Health News One vaccine shipment to Canada delayed by a day due to weather: Pfizer 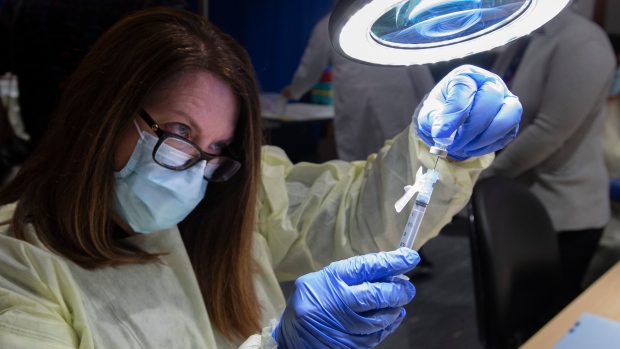 OTTAWA — Today’s planned delivery of Pfizer doses has been delayed by one day due to inclement winter weather in the United States, the pharmaceutical giant has confirmed to CTV News.

The short delay is to just one of what Pfizer says will be a few shipments slated to arrive in Canada this week. Overall this week’s delivery total is expected to be 403,650 doses.

“Unfortunately the inclement weather in the U.S. has caused a short delay of today’s planned delivery. As a result, our delivery scheduled for today will be delayed by one day. However, the majority of our deliveries this week are scheduled for Wednesday and Thursday and those remain on schedule,” said spokesperson Christina Antoniou in an email.

“We are doing everything we can to try and reduce the delay as much as possible and sincerely regret any inconvenience this may have caused,” she said.

As a result of “significant weather events,” the United Parcel Service (UPS) closed its Worldport shipping facilities in Louisville, Ky. on Monday.

While Canada’s doses are being shipped from Europe, they pass through the U.S. facility in Louisville along the way.

Weather delays have been considered a potential issue by the federal government and those leading Canada’s national vaccine rollout, though during a press conference in which the vaccination campaign was discussed, Procurement Minister Anita Anand did not mention this delay.

This holdup follows a month-long slowdown as it made changes to its facility in Belgium, resulting in deliveries of the company’s COVID-19 vaccine to Canada dropping off completely for one week and significantly reduced in others.

As of this week, and in the weeks between now and the end of March, Canada is expecting to receive weekly shipments of more than 400,000 doses.

Before the brief delay was announced, Cole Pinnow, president of Pfizer Canada, was asked on CTV News Channel about Canada’s vaccine rollout, where he stated the pharmaceutical giant is “confident” it will meet its target of four million doses delivered to Canada by the end of next month.

Pinnow noted that the company has moved up its timeline for all 40 million guaranteed doses to the end of September, instead of the end of the year.

Canada currently receives its doses from the Belgium facility, but some have suggested the government could turn to the U.S. state of Michigan, also home to a Pfizer production facility, for help with more doses.

Pinnow acknowledged that the company is considering that as an option for the second part of 2021, but is confident that Belgium will satisfy the dosage needs for now.

Though Canada has faced criticism for its lack of domestic production capacity, Pinnow said that vaccine manufacturing is so complex — particularly with a product as innovative as the Pfizer mRNA vaccine — that there could have been “a bottleneck in the process” even with a Canadian facility in play.

“It’s important to note, regardless of who’s making which part of any given product, that there is a global supply chain and it’s really in all of our best interest to support open borders and open trade,” Pinnow said.

He also said that from his perspective, Canada was doing “quite well” in the global vaccine race.

Canada is currently 19th in the world when it comes to total vaccines administered as a percentage of population, according to CTV News’ vaccine tracker.

While more than 975,000 first doses of Pfizer and Moderna vaccines have been administered across the country over the last two months, amounting to less than three per cent of the population, other nations have far surpassed the Canadian speed. In the U.S., nearly 53 million doses have already been administered. In the U.K., now a global leader for immunizations, nearly a quarter of the population has been inoculated.

“When you look at over 50 countries that Pfizer is contracted with, Canada is doing exceptionally well on deliveries. But what we’re trying to manage is a global supply chain to meet our obligations to all 50 countries,” said Pinnow.

In the House of Commons on Tuesday the federal government continued to face a series of questions from the opposition parties about the state of Canada’s vaccination efforts, all pushing for more details and an accelerated pace so that the country doesn’t fall further behind other nations when it comes to tacking the virus, and restarting the economy.