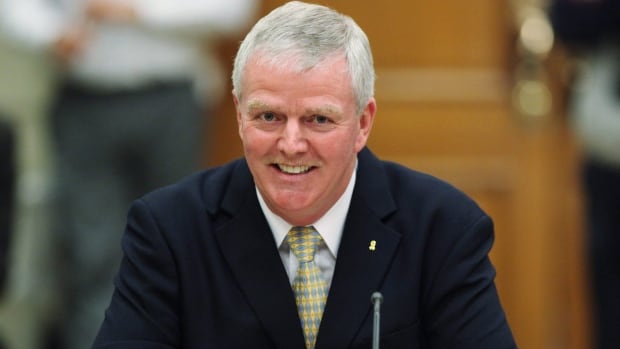 Ontario has tapped former head of the Canadian Armed Forces Gen. Rick Hillier to lead a new task force that will oversee the rollout of the COVID-19 vaccine in the province, Premier Doug Ford announced Monday.

At the province’s daily press conference, Ford said Ontario is being told that the first doses of the vaccine are expected to be ready in early 2021.

“We need military precision,” Ford said, noting that rollout of the vaccine will be a “massive logistical challenge.”

“We will get vaccines to every part of this province when they are ready.”

Elliott said the province is still waiting to hear exactly when it will start receiving vaccines, but it is expected that Ontario’s most vulnerable and healthcare workers would start getting them before March. These people will have to be vaccinated twice in 21 days, she said.

This news comes as Ontario reported 1,589 more cases of COVID-19 on Monday, another single-day record as Toronto and Peel Region move into a second lockdown.

The new cases include 336 in Toronto, 535 in Peel and 205 in York Region. They drive the seven-day average up to 1,423 after six consecutive days of increases.

Other public health units that saw double-digit increases in today’s update were:

[Note: All of the figures used in this story are found on the Ministry of Health’s COVID-19 dashboard or in its Daily Epidemiologic Summary, which include data from up until 4 p.m. the previous day. The number of cases for any region may differ from what is reported by the local public health unit, because local units report figures at different times.]

Provincial Medical Officer of Health Dr. David Williams said Monday that Toronto is “holding the line” on cases, but noted that infections are now ticking up in other red and yellow zones in the province.

“It’s not just the lockdown areas that have to be concerned,” Williams said.

Sixty of the new infections were school-related, including 51 students and nine staff members. A total of 676, or about  14 per cent, of Ontario’s 4,828 publicly-funded schools have reported one current case of COVID-19. Three schools remain closed due to the illness.

The additional cases come as Ontario’s labs processed 37,471 test samples for the novel coronavirus, and 18,394 were added to the queue to be completed. The province reported an overall test positivity rate of 4.6 per cent.

With today’s update there are currently 13,004 confirmed, active cases of COVID-19 in the province, the most at any point since the outbreak began in late January.

Further, 19 more people with COVID-19 have died, the province said, pushing the official death toll to 3,505. The additional deaths include 11 residents of long-term care and a man in his 20s, the fifth person in their 20s to die with COVID-19 in Ontario. So far this month, 360 people with infections of the novel coronavirus have died provincewide.

The number of people with confirmed cases in hospitals grew by 23, up to 507. Some 156 of those patients are being treated in intensive care. Public health officials have identified 150 as the threshold for when unrelated surgeries and procedures are likely to be postponed because of burdens on the hospital system.

Meanwhile, Toronto and Peel Region have entered the most restrictive tier of Ontario’s pandemic protection plan.

It means that for at least the next 28 days, non-essential retailers can only offer curbside pickup, while restaurants are closed to all but takeout and delivery orders.

Personal services have also been forced to close, but schools and child-care centres remain open.

Ford announced the move on Friday, but it didn’t come into effect until 12:01 a.m. today.

That gave residents of Toronto and Peel the chance to stock up over the weekend, and many did — flooding local malls, even as those facilities extended hours in an effort to prevent too many people from coming at once.

Ford fielded several questions from reporters Monday about why he isn’t allowing small businesses to stay open in some way, yet big box stores are allowed to remain open.

In particular, Ford was asked why the province isn’t following Manitoba’s model, where businesses are required to remove any non-essential goods from the shelves or rope off those areas.

Ford said he had spoken with the CEO of Walmart, and said the practice was causing “massive problems” in that province.

“It would be a logistical nightmare,” Ford said.

Still, the premier said he knows that forcing businesses to close is “not fair,” and went on to list things he says the province has done to help them.

While Toronto and Peel face the strictest measures, other areas of the province are also seeing rules tighten.

Durham Region and Waterloo joined York Region in the red classification today. The rules limit restaurants, gyms and food courts to 10 indoor patrons with social distancing, with even tighter restrictions on private gatherings.

They include at least two metres distancing or a cap of 50 people for both indoor and outdoor events such as weddings and funerals. Shopping malls and stores must also set capacity limits that ensure two metres between shoppers.

The areas around Huron, Perth, Simcoe, Muskoka, and Windsor-Essex have also moved to the orange classification, which caps gatherings at staffed businesses to 50 people indoors, or four per table at restaurants.

The provincial government introduced a motion in the legislature Monday to extend the term of Ontario’s Chief Medical Officer of Health Dr. David Williams.

Williams said Monday afternoon that Ford and Elliott asked him to stay on. He said he feels like the role of medical officer of health is “not for what you can get out of it, but what you can contribute to it.”

Williams’s five-year tenure was set to expire in February, but the motion would see it lengthened to September 2021. However, the provincial NDP did not provide unanimous consent on the issue today, so it will be debated and go through a vote.

“The chief medical officer of health is a critical player in the pandemic response strategy. Re-appointing him with no process and no discussion is turning this key public health decision into a political game,” said Deputy Leader of the Opposition Sara Singh in a statement.

“We recognize there are very legitimate concerns about how the government is handling this pandemic,” said Singh. “The Ford government cut back on public health protections just as the second wave was starting to surge, and set disastrously high thresholds for action.

While Ford has repeatedly praised Williams for his role in formulating Ontario’s response to COVID-19, Williams has come under increased public scrutiny as a second wave of the illness grips parts of the province.

He was recently criticized by peers for suggesting that even virus hotspots could move into the green “prevent” tier of Ontario’s restrictions framework by Christmas.

“I do not ever believe in changing a dance partner in the middle of a dance, especially when he’s an incredible dancer,” Ford said.