Obtaining the Campaigns list from the server has failed!
Server response:
CM Ad cahger Server plugin is not active on https://legendarygroup.co/admanager/
You Are Here Home Health News Ontario could see more than 9,000 new COVID-19 cases per day by end of year: new modelling 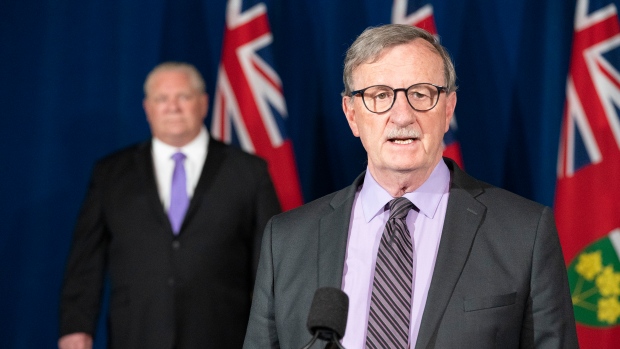 TORONTO — Ontario could see more than 9,000 new cases of COVID-19 per day by the end of the year, according to the worst-case scenario revealed in new modelling.

The provincial government released the updated projections during a news conference held on Thursday afternoon.

The modelling suggests that if COVID-19 cases grow at a rate of three per cent, Ontario will record more than 4,000 cases per day by Dec. 30.

But, if cases grow at a rate of five per cent, Ontario could see more than 9,000 cases per day by that date.

Cases of the novel coronavirus in Ontario have been growing at a rate on average of 0.45 per cent over the past 14 days.

Also under the five per cent growth scenario, Ontario could have more than 300 COVID-19 patients in the intensive care unit (ICU) by mid-December.

According to the provincial government, when there are less than 150 COVID-19 patients being treated in the ICU, the province can “maintain non-COVID capacity and all scheduled surgeries.”

Once that number rises above 150, it becomes harder to support non-COVID-19 needs, the government said. Once it exceeds 350 people, it becomes “impossible” to handle.

There are currently 151 COVID-19 patients in Ontario ICUs, according to the province’s data.

The new projections for the spread of the disease come after Toronto and Peel – two of the biggest COVID-19 hot spots in the province – went into lockdown earlier this week.

The province released the last set of projections two weeks ago. That modelling showed that Ontario could see as many as 6,500 new COVID-19 cases per day by mid-December if additional health measures were not put into effect.

Furthermore, on Wednesday, Ford detailed the province’s guidelines for the upcoming holiday season. He urged residents to refrain from hosting large parties and instead only celebrate with those you live with or with one additional household if you live alone.

Speaking at a news conference held just before Thursday’s modelling was released, Ford said “we can’t let our guard down for a second.”

“I’m concerned. I’m still concerned, concerned that the numbers are going to continue rising,” he said. “We have to be vigilant and we have to really focus on the areas that we see the outbreaks – be it in Peel, in Toronto in York, we have to knuckle down and get through this. It’s absolutely critical.”

On Thursday, 1,478 new cases of the novel coronavirus were confirmed along with 21 more deaths.

The current seven-day average for number of cases reported is 1,427.

Manitoba releases who will be next in line to get vaccinated

Bill Gates says gap in vaccine rollout between rich and poor countries will be ‘6 to 8 months, best case’

A compound that slows bone loss, and a resource for developing treatments to slow aging

B.C. couple accused of flying to Yukon to get vaccinated must wait for 2nd dose, ministry says