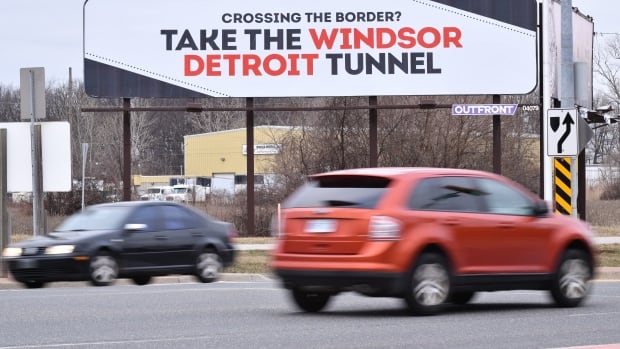 Jeffrey Rowe was heading back into Windsor, Ont., on Saturday night after working a hectic 12-hour hospital shift in Detroit, when he was stopped at the border for something very peculiar.

“I came through the tunnel and there wasn’t a lot of traffic and when I went through the customs area, there was about two or three cars with their emergency lights on,” said Rowe. “I thought ‘Oh man they’re not going to let us back in the country’ … I was totally frightened.”

Rowe is a respiratory therapist at Henry Ford Health System’s Midtown Detroit hospital, and thought he might be turned back at the border. Instead, he saw something that shook him to the core.

“There was about 20 [officers] and they had these hand-written signs, welcoming us back into the country and they were cheering,” said Rowe, who was shocked by the display of the normally stoic and very professional Canadian border officers.

“I rolled down my window and gave them the thumbs up and said ‘You guys are awesome.’

“To see these guys jump up and big smiles, just crazy. It just went right to my heart. I was crying all the way home.”

WATCH | Rowe thanks border officers for his warm welcome:

Respiratory therapist Jeffrey Rowe had a pleasant welcome home, after a long shift at a Detroit hospital. 1:47

Rowe said when he finally made it home, he could barely recall to his wife — also a health-care worker in Michigan — what had just happened.

“My knees got kind of rubbery I just went down onto my knees and explained to her what happened, we both just hugged each other and started crying,” he said.

Even though, he admits, he’s not a social media guy — Rowe posted a message about what it meant to him.

He said the response to his video has been extremely positive. But the situation made him realize the intensity of the situation he’s in.

‘That stress is always there’

Michigan has nearly 16,000 cases of COVID-19 and about 4,500 in Detroit alone. The hospital where Rowe works is turning general floors into intensive care units because of the amount of people that require respiratory help, he said.

The challenge is keeping COVID-19 patients away from other patients.

I’d never seen anything like that– Jeffrey Rowe, respiratory therapist

“We’re having to put people all over the place … it’s really tough. Because of that, as therapists, we’re having to transport patients from unit to unit,” he said. “Some of our therapists had to be tested because they’re showing signs of it.”

Rowe is one of the hundreds of health-care workers who daily cross the border, which remains closed to non-essential travel.

Their travel has been in the news as officials on both sides of the border worry and argue about the spread of COVID-19 among hospital workers.

Rowe said he might not have realized the stress he’s been under while doing his job, and the warm welcome home at the Canadian border was a “release” for him.

Prime Minister Justin Trudeau was asked whether health care professionals who cross the border for work should be told they have to choose either to work in Canada or the United States. 1:01

“I’d never seen anything like that before it was just wonderful,” he said. “I thought I was on top of everything … but I think it was, like, a really good release to just cry.

“Instead of just bearing it down, it made me realize that maybe I’d been walking around a little bit stressing about this more than I thought.”

Although he has appropriate safety gear, Rowe said he does still feel scared sometimes about contracting the virus. But what he’s more worried about is helping patients in dire need who are in isolation in the hospital.

“If something goes on with them where they need emergency intervention … you can’t rush in there like you want to to help them — you have to stop, you have to slowly put your stuff on,” he said. “And that leads a lot of tension because you want to get in there but you don’t want to compromise yourself or your co-workers. That stress is always there.”

Curve at tip of shoes eases movement but may lead to weaker muscles, problems