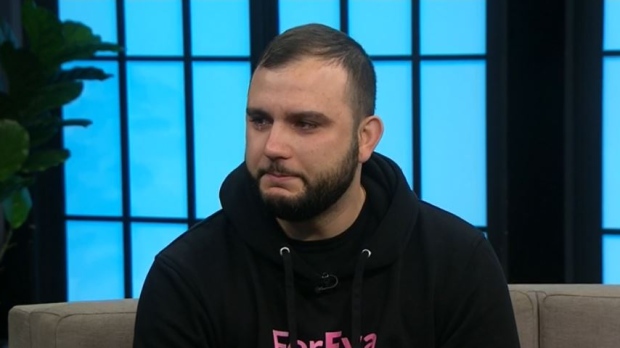 TORONTO — The Ontario parents of a five-month-old girl with a rare and potentially deadly disorder have entered a lottery for the world’s most expensive drug in hopes of saving her life.

Ricardo and Jessica Batista are taking a chance that their baby daughter Eva, who has spinal muscular atrophy (SMA), will be randomly selected by the Swiss pharmaceutical company that manufactures the multi-million dollar drug.

The single, one-time gene therapy called Zolgensma costs $2.8 million and is reportedly the only possible cure on the market. It has not been approved by Health Canada. For the drug to be effective, Eva has to receive it before she turns 2 years old.

“She’s a beautiful little girl that always has a smile on her face,” Ricardo said on CTV’s Your Morning on Wednesday. “She doesn’t know that anything is wrong. Sometimes we look at her and it kills us inside that she’s so happy and she has no idea.”

SPA affects simple actions such as Eva’s breathing, swallowing and her ability to hold her head up. This week, she is in the hospital again, said Ricardo. She was intubated after contracting pneumonia and two viruses.

The Swiss drug company Novartis began accepting applicants for the Zolgensma lottery earlier this month and said it will randomly select one every two weeks to receive the therapy. It will give away 100 doses worldwide. If Eva doesn’t win, she’ll remain on an alternative life-long therapy called Spinraza, which is approved in Canada and costs over $700,000 in the first year and more than $350,000 for subsequent years. Ricardo said Spinraza has not proven as effective as Zolgensma.

“There’s a lot of risk to it. The effect in the people that we’ve seen is not the same (as the lottery drug),” he said. “We have the chance of winning this lottery — which is still a long shot — or we have to go somewhere and pay for it ourselves.”

The Batistas received a cost estimate of $4 million for Eva to be administered Zolgensma at a U.S. hospital.

In an emotional interview on CTV’s Your Morning, Ricardo wore a “For Eva Strong” sweater and said there has been a lack of response from the Canadian government. “It doesn’t look like any funding or any help,” he said.

The lottery system, which has been likened to the Hunger Games and dubbed the “baby lottery” by some media, has been criticized by patient groups around the world.

“It’s really too crude,” said Kacper Rucinski, co-founder of U.K.-based patient-advocacy group TreatSMA, in an interview with the Wall Street Journal. “They are making patients compete. Which will be the lucky one? That’s not helpful.”

The Batistas have been holding fundraising events and launched a GoFundMe campaign in October to raise $2.8 million, the cost of the life-saving drug. So far, they have raised more than $743,000.