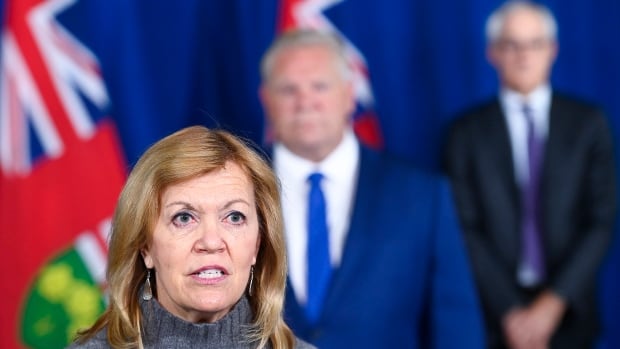 The provincial government is recommending that kids not go out trick-or-treating in parts of Ontario that have been hardest hit by a resurgence in COVID-19 cases.

“Given the high transmission of COVID-19 in the modified Stage 2 public health unit regions of Ottawa, Peel, Toronto and York Region, traditional door-to-door trick or treating is not recommended and people should consider alternative ways to celebrate,” provincial Medical Officer of Health Dr. David Williams said in a statement.

The province says trick-or-treating is permissible outside of those regions, but with these safeguards in place:

The news comes as Ontario is reporting an additional 704 cases of COVID-19 Monday morning.

Testing levels were again well below the 50,000 benchmark provincial officials had set for October, with 31,864 tests completed. There are 16,303 test samples currently in the queue.

Health Minister Christine Elliott said in a tweet that 244 cases were found in Toronto, as well as 168 in Peel, 103 in York Region, and 51 in Ottawa.

There were also 607 resolved cases.

“I would also like to remind everyone that we are in a second wave of COVID-19,” Williams said in his statement. “There have been increases in cases in many areas across the province, and the percentage of people tested who get a positive result is going up.

“The severity of this second wave is in our hands. Through our collective efforts, we can change the outcome of this new outbreak.”

The number of infected patients in Ontario hospitals rose slightly, from 247 to 252 — but the province said a number of hospitals did not submit data on hospitalizations, which often happens on weekends.

“We anticipate the number of hospitalized patients may increase when reporting compliance increases,” the province said on its website.

The number of patients in intensive care fell by two to 69, while the number of people on ventilators dropped by three, to 40.