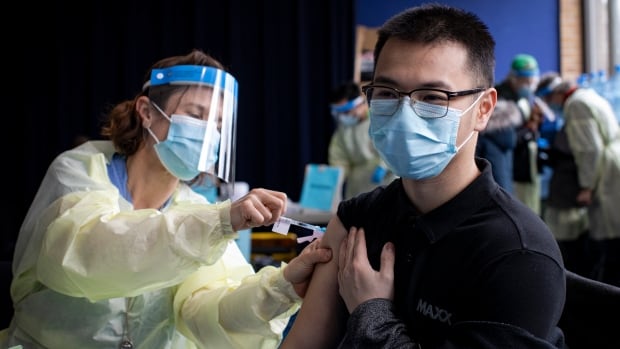 Ontario reported another 4,212 cases of COVID-19 and 32 more deaths linked to the illness on Wednesday, as the government confirmed “enhancements” to the federal paid sick leave program are coming.

According to the Ministry of Health, public health units also administered a new high of 136,695 doses of vaccines yesterday.

The previous single-day high for vaccine doses was 115,634 on April 16. Ontario’s COVID-19 vaccine task force has said it hopes to reach a benchmark of at least 150,000 shots per day when shipments of the Pfizer vaccine ramp up in coming weeks.

Notably, a country-wide Rogers outage led to an undercount of the number of shots that were given out on Monday in Ontario because some clinics had to move to paper-based reporting. It’s not clear if any doses missed in Monday’s count were added to today’s figure, which would mean it could be artificially inflated. CBC Toronto has reached out to the Ministry of Health for clarification.

There are now 790 patients being treated in ICUs for COVID-19-related critical illnesses, the most-ever in Ontario. Of those, 566 require a ventilator to breathe, also a new high, according to the Ministry of Health.

Ontario hospitals are transferring an unprecedented number of patients within the province as they try to make room for critically ill people while ensuring other patients still receive an appropriate level of care.

Ontario’s COVID-19 science advisory table, a group of experts who help guide the pandemic response, warned last week that even if daily case counts begin to level off or fall, increasing admissions to ICUs are “baked into” the next few weeks.

Modelling suggests that, depending on public adherence to provincial COVID-19 restrictions, total critical care admissions could exceed 1,000 in the coming weeks before beginning a slow decline.

Yesterday, labs completed 51,877 tests for SARS-CoV-2, the virus that causes COVID-19, and logged a provincewide positivity rate of 7.9 per cent.

The 32 additional deaths in today’s update push the official toll to 7,789. The seven-day average of daily deaths is up to 25.6, a new high for the third wave of the pandemic.

As has been the case each day this week, question period at the legislature was dominated by the issue of paid sick leave for workers who fall ill with COVID-19 or are forced to isolate due to cases in the workplace.

In response to questions from opposition MPPs, Calandra said that the province will make “additional enhancements” to the currently available federal program in the coming days. That came after the government denied unanimous consent for a motion from the Liberal caucus that would have seen immediate passage of Bill 247 to provided workers with 10 paid sick days right away.

Until this week, Premier Doug Ford and his cabinet had declined to implement paid sick leave, saying the province didn’t want to duplicate the Canada recovery sickness benefit (CRSB) from Ottawa — that it would be “double dipping” and unfair to taxpayers.

The refusals came despite repeated calls over many months from the government’s own health advisors, local medical officers of health, outside infectious disease experts and labour advocates for additional assistance for essential workers, who continue to bear the brunt of the pandemic. They say the CRSB is needlessly complicated and financially insufficient.

Sick leave falls under provincial jurisdiction, and Ontario had its own program until the current government cut it in 2018.

The province’s messaging on paid sick leave has changed markedly as the third wave worsens, with cabinet members pointing to gaps in the CRSB that have, they now say, long needed to be fixed. Speaking to reporters, Calandra pointed to the wait time for workers to get their assistance, the program’s eligibility requirements and a lack of a paid day off to get vaccinated as the deficiencies the government hopes to reconcile.

Calandra said the changes are necessary now because the third wave is “much more difficult and complex” than the previous two due to the emergence of variants of concern.

Notably, the science table warned cabinet as early as mid-February about the impacts variants would have if Ontario loosened restrictions and failed to provide paid sick leave for workers.

Calandra said more details about the province’s plan are “imminent,” but that cabinet wants to “get it right” before moving forward.