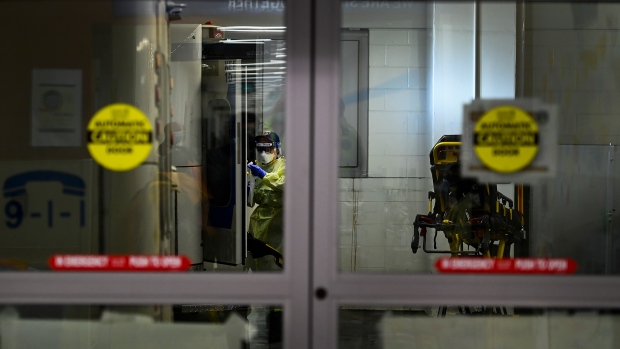 TORONTO — A group of scientists advising the Ford government on the COVID-19 pandemic are speaking up in favour of mandating vaccines for all health-care workers, calling it an “evidence-based policy that protects Ontarians.”

Premier Doug Ford had written a range of experts and stakeholders last week asking for their opinions on the merits of introducing a vaccine mandate that would no longer allow unvaccinated health-care workers to remain on the job by participating in a regular testing program.

In a response to Ford’s letter, released by Ontario’s Science Advisory Table on Tuesday, the doctors argue that such a mandate “can enhance safety and reduce the risk of staffing disruptions due to COVID-19.”

“COVID-19 vaccines help to protect the people working in Ontario’s hospitals, as well as the unvaccinated and vulnerable patients more at risk of SARS-CoV-2 infections and COVID-19 complications,” they say. “Requiring that hospital workers be vaccinated is an evidence-based policy that protects Ontarians.”

The Ontario Medical Association has been calling for a vaccine mandate for health-care workers since July but the Ford government has so far refused to go that far, even as it introduced a vaccine requirement for many non-essential activities.

In his letter, Ford said that approximately 15 per cent of Ontario’s health-care are believed to be unvaccinated and suggested that a mandate, similar to one introduced in Quebec and British Columbia, could force hospitals to place thousands of workers on unpaid leaves during a time in which they continue to be under immense strain.

But in their response, members of the science table said that the likelihood of unvaccinated workers contracting COVID-19 and being forced to miss significant time could have a bigger impact on human resources, given research suggesting that only a “small” number of workers will “actually leave the workforce to avoid vaccination.”

“Vaccine mandates for health-care workers are not new. Mandates for influenza vaccines for health-care workers in high-risk settings, such as hospitals and long-term care homes, have been in effect across Canada and the United States for more than two decades,” they say. “Studies of influenza vaccination mandates demonstrate that these policies can increase vaccine uptake. During the 2019-2020 influenza season, vaccine uptake among long-term care workers in the United States was approximately 70 per cent, however, in settings with mandates, more than 85 per cent of workers were vaccinated.”

Chief Medical Officer of Health Dr. Kieran Moore has previously said that about 40 per cent of hospitals have implemented their own vaccine mandates for workers and a number of them have already placed hundreds of employees on unpaid leaves.

In its response to Ford, the science table did acknowledge research showing “lower vaccine acceptance among those who are racialized, rural and have experienced discrimination” and said that “trust-building strategies to increase uptake are important to counter equity and ethical concerns for hospital workers” should a mandate be introduced.

The Ford government previously mandated vaccination for long-term care workers earlier this month amid data suggesting a number of homes had vaccination rates lower than 70 per cent.