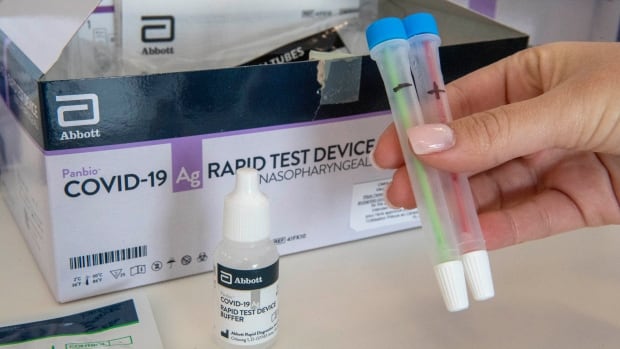 Dr. Kieran Moore, Ontario’s chief medical officer of health, is scheduled to hold a 3 p.m. ET briefing on the COVID-19 situation in the province. You’ll be able to watch it live in this story.

Ontario’s group of expert advisers on COVID-19 is recommending health officials implement voluntary rapid testing in settings such as schools and workplaces in areas that reach a certain level of infection.

The suggestion comes as the province reported 1,290 new cases of COVID-19 on Thursday, the most on a single day since May 24, nearly six and a half months ago.

The seven-day average of daily cases has climbed to 1,055, a 24 per cent jump over the same time last week.

In its latest briefing published this morning, the science table advised that public health units or neighbourhoods where new COVID-19 cases are near 35 per 100,000 people per week and where there is sustained exponential growth, carry out weekly voluntary screening of unvaccinated or partially vaccinated people in elementary schools.

The group said health officials in those areas could also deploy rapid antigen tests in workplaces and congregate settings.

If new daily cases approach 175 per 100,000 people per week in a health unit or area, however, “weekly testing is likely not frequent enough to reduce spread effectively,” the science table said. In that case, unvaccinated and partially vaccinated people should undergo rapid testing two to three times a week, it said.

It added that public health units in that situation may also want to look into voluntary testing of fully vaccinated people at the same frequency.

The brief noted the high accuracy of rapid antigen testing in detecting the delta variant, which currently accounts for most cases in Ontario. It did not examine the use of such tests to detect the new, potentially dangerous omicron variant, of which there are presently dozens of confirmed cases in the province.

People infected with the delta variant reach a peak viral load earlier than previous variants, often before symptoms emerge, the document said. That’s what makes the variant more contagious than the ones that came before it, but also what makes rapid antigen tests more accurate in detecting it, the science table said.

“Rapid antigen tests could therefore help interrupt the chain of transmission by identifying infectious cases of COVID-19 quickly, leading to prompt isolation of the infected person,” the group said.

“Rapid antigen tests may also present a valuable alternative to individual isolation after exposure in schools. Implementing voluntary ‘test to stay’ protocols, where exposed students remain in school as long as daily tests are negative for SARS-CoV-2, could help prevent the harms of isolation without increasing transmission.”

The science table said it considers rapid testing in elementary schools a priority since students under 12 in the province are not yet fully vaccinated. But it added Ontario could use rapid testing in “many ways” to curb the spread of the virus.

The group’s latest advice comes as calls continue to grow for broader rapid testing ahead of the holiday season.

Some workplaces in the province offer rapid tests for their employees, and the government has said children in publicly funded schools will each receive five tests to take home over the December break.

The tests, which provide results in about 15 minutes, are also available for a cost of up to $40 at some pharmacies for travel and other asymptomatic uses.

Critics have argued making the tests more widely available, and free for all to use, would help stave off rising infections, particularly over the December holidays. In a statement in response to the science table’s briefing, the ministry of health said that 75 per cent of schools boards have received the tests, with the rest expected to arrive in the coming days.

The statement said the province had distributed more than 34 million rapid tests as of Monday, and deploys more than a million to workplaces, hospitals, and other congregate settings each week.

It also noted that an initiative announced on Nov. 18 will see asymptomatic Ontarians be able to access free rapid tests at pop-up sites in “high-traffic public settings, such as malls, retail settings, holiday markets, and transit hubs.”

“We’re covering the gamut of making sure that people have the test,” Ford said during an unrelated announcement in Peterborough. “We have a plan, it’s a strong plan, and we’re going to make sure that we continue implementing that pandemic plan.”

The province on Thursday reported a new pandemic high of 280 school-related COVID outbreaks. Some 255 of those outbreaks are in elementary schools, also a new high.

During the third wave of the pandemic in the spring, school-linked outbreaks peaked at 264 on April 14, two days after the province announced it would close schools in a bid to contain transmission of the virus.

In recent weeks, schools have been the setting for the bulk of COVID-19 outbreaks in Ontario. In this context, an outbreak is defined as two or more lab-confirmed cases in students, staff or visitors where at least one of the infections has an epidemiological link, meaning the case was transmitted within the school, not in the wider community.

As of Wednesday, 25 per cent of children aged five to 11 had received a first shot of vaccine. Meanwhile, more than 86 per cent of eligible Ontarians aged 12 and older have had two doses.

While cases continue to rise rapidly in many parts of the province, the burden of COVID-19 patients on hospitals has also continued to increase, albeit much more slowly.

According to the Ministry of Health, there are 309 people with COVID in hospitals on Wednesday, down from 333 the previous day but up from 291 last Thursday.

Of those currently in hospital, 155 were being treated in intensive care.

Ontario’s science advisory table forecasted in its latest modelling, released on Tuesday, that the province could see between 250 and 400 COVID patients in ICUs by the latter part of January, depending on the pace of vaccinations.

In response, the government said the health-care system can “safely admit” about 300 COVID patients to ICUs without the need to postpone other urgent care.

The Ministry of Health also reported the deaths of 10 more people with COVID-19 today, pushing the official toll to 10,054.