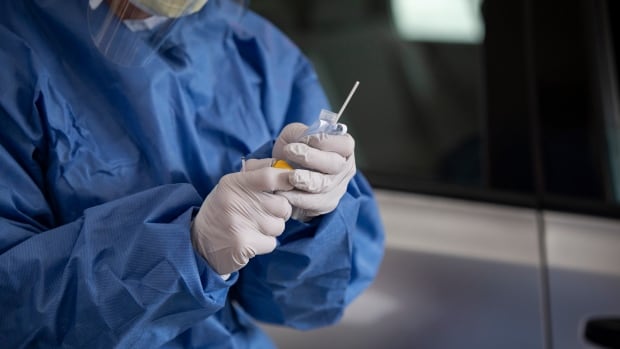 “We have eliminated the long lineups,” Ford said at a news conference Tuesday, saying the province cleared its testing backlog by 40 per cent by pausing appointments for a day and limiting tests for asymptomatic people.

The premier added that those who need an appointment will get one — that’s despite reports of extremely long wait times for booking a test in some areas as the province shifts from physical lines to virtual ones.

Ford also responded to questions about confusion around social gathering rules ahead of the Thanksgiving long weekend.

“I’ll be very frank, I’m hearing the total opposite,” he said when asked about what some see as mixed messaging. “We’re flattening the curve and we’re putting the protocols in.”

Ford also said that he will limit his own family gathering to 10 people, advising people to “hang off on the hugging and kissing.”

Still, asked who exactly will be attending his Thanksgiving dinner, Ford could not confirm whether family members who don’t live with him will be present and instead asked to follow up with CBC reporter Mike Crawley later on with details.

Ontario reported another 548 cases of COVID-19 on Tuesday, as the province’s appointment-only testing plan officially came into effect.

Nearly two-thirds of new cases are in the GTA, with 201 in Toronto, 90 in Peel Region and 56 in York Region. Ottawa also confirmed an additional 62 infections of the novel coronavirus.

Other public health units that saw double-digit increases include:

Health Minister Christine Elliott said about 61 per cent of the new cases in today’s update are in people under 40 years old.

Seventy-four of the cases are school-related, including 41 students, 10 staff and 23 people categorized as “individuals not identified.” A total of 347 of Ontario’s publicly-funded schools, or just over seven per cent, have now reported at least one case of COVID-19 in students or staff.

The province’s network of labs processed more than 42,000 test samples for the novel coronavirus, while the backlog sits at 55,483.

Ontario recently announced it would end testing for asymptomatic people at its 153 COVID-19 assessment centres, instead moving to an appointment-only model for those with symptoms of the disease. The decision was made, in part, to help labs clear the backlog of test samples, which at its highest grew to more than 92,000.

Ontario sending some COVID-19 tests to U.S. for processing

Meanwhile, Ontario is sending some COVID-19 tests to the United States for processing as it works to clear its testing backlog.

The government says its work to expand laboratory capacity includes using third-party providers, including Quest Diagnostics, which is in the U.S. Yesterday, Premier Doug Ford said a shortage of lab technicians and chemicals needed to process tests were pushing Ontario to its capacity.

NDP Leader Andrea Horwath says the need to send tests to the U.S. shows the province is scrambling to respond to the second wave of the pandemic.

The last day for walk-in testing in the province was Saturday. Health experts have warned the shift could result in artificially-low new daily case counts later this week.

The number of people in Ontario hospitals with confirmed cases of COVID-19 continued its steady rise and is now 192, 16 more than in yesterday’s report. Forty-one patients are being treated in intensive care units, while 26 are on ventilators.

Meanwhile, the province’s official COVID-19 death toll grew by seven and sits at 2,987.

Ontario has now seen a total of 55,362 confirmed cases of COVID-19 since the outbreak began in late January. Of those, about 84.7 per cent are resolved. Another 546 were marked resolved in today’s report.

There are currently some 5,469 confirmed, active cases of the illness provincewide, a slight drop from yesterday, though still a figure not seen since late April.