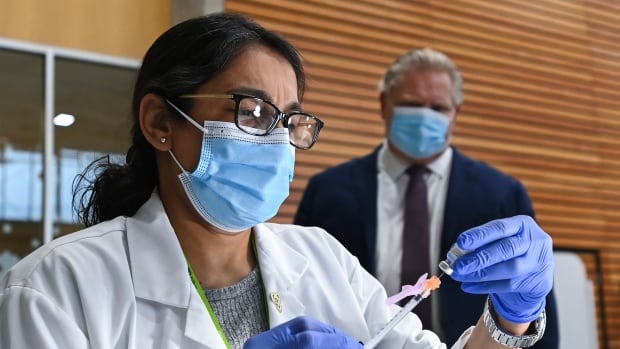 Ontario will announce a form of proof-of-vaccine certification — commonly known as a “vaccine passport” — for the province, sources tell CBC News. The plan is expected to be revealed early next week.

Sources with knowledge of the plan spoke on condition of confidentiality because they weren’t authorized to speak publicly.

The implementation of the COVID-19 vaccine passport will be discussed at a cabinet meeting scheduled for Tuesday. Sources say that while some cabinet members are opposed to a vaccine passport, the program will go ahead.

The possibility of a vaccine passport for Ontario was first reported by Global News.

Pressure has mounted on Premier Doug Ford’s government in recent weeks to institute some sort of vaccine passport as the province navigates a fourth wave of the pandemic driven by the delta variant.

Many local medical officers of health, as well as mayors of some of Ontario’s biggest cities and independent medical experts, have publicly joined the chorus, saying a clear, effective provincewide system is needed to avoid confusion and curb the current wave.

Quebec and B.C. already have created smartphone-based vaccine passports that people can use to prove their COVID-19 immunization status in commercial or public spaces — everything from bars and restaurants to bowling alleys and hockey rinks — where provincial law will soon require proof of a shot before entry.

Manitoba has also announced plans for a vaccine mandate that will restrict restaurants, fitness centres, theatres and ticketed sporting events to people who show proof of vaccination.

The provincial government had said as recently as Wednesday that it was not planning to implement vaccine passports in Ontario.

A spokesperson for the minister of health told CBC News earlier this week that Ontario would not be moving to a system similar to Quebec’s, following comments by the Eastern Ontario Health Unit’s Medical Officer of Health Dr. Paul Roumeliotis that seemed to suggest otherwise.

Until now, Ontario has resisted the idea, with Ford saying he doesn’t want a “split society.”

The province has also said Ontarians have the option of printing out their electronic vaccination receipts if needed, though critics have pointed out that printouts can easily be forged.

On Wednesday, Peel Region’s medical officer of health also threw his support behind a vaccine certificate program, saying he was exploring local options in case the province didn’t step up with one. Toronto Mayor John Tory similarly said earlier this month that he supports such a program.

Business groups such as the Ontario Chamber of Commerce, the Canadian Federation of Independent Business and the Toronto Region Board of Trade have also called for a vaccine certificate system as a way to avoid a fourth-wave lockdown.

While campaigning Friday, Liberal Leader Justin Trudeau also announced a billion-dollar fund to help provinces create their own vaccine passports, and called on Ford to “step up” and implement one.

If a province requires that everyone at a local restaurant, gym or other non-essential business location be fully vaccinated and show proof of vaccination, Trudeau said, Ottawa would pay for the development and the rollout of that program.

“It keeps people safe. It encourages everyone to do the right thing. It keeps our businesses open and it keeps our economy rebuilding,” Trudeau said.