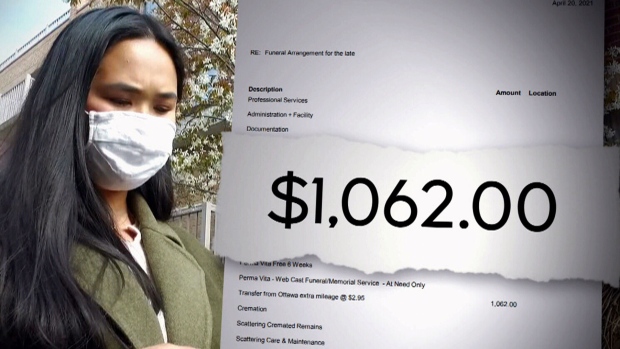 TORONTO — An Ottawa hospital has apologized and said it will reimburse a Toronto woman’s family who was forced to pay a private company to bring her uncle’s body home after he was transferred to the hospital and later died there of COVID-19.

Montfort Hospital told CTV News on Thursday that the situation was a “sad, very unfortunate case of misunderstanding.”

“When reaching out to the family after the death of their loved one, our ICU manager had asked them to send any invoice they might receive to our Finance Department. However, it seams that the funeral home invoiced the family directly,” the hospital said via email.

Montfort Hospital says it has since contacted the family to apologize and ask them to pass along the invoice for a “prompt reimbursement.”

“We are also reviewing our process and we will document the information given to the families in the future, to avoid such unfortunate situations,” the hospital added.

Jamie Nguyen previously told CTV National News that her 72-year-old uncle was being treated at Scarborough General Hospital in Toronto after contracting the virus.

When his symptoms worsened, Nguyen said the family was told that there was no room for him in the ICU and he was transported nearly 400 kilometres away to Montfort Hospital in Ottawa.

Nguyen said he later died there, taking his last breath alone and in a facility hours away from his loved ones.

“He was by himself in a city that he didn’t know, it wasn’t home, no one was there for him,” Nguyen said.

CTV News is not identifying the man to protect his immediate family, who are concerned about potential anti-Asian backlash.

Adding to the grief of losing a loved one to COVID-19, Nguyen says the family struggled to figure out how to get her uncle’s body back to Toronto, with no help from officials.

She says the family was given the runaround by everyone they talked to including Health Canada and TeleHealth Ontario.

In the end, Nguyen said the family was “left with no other option” than to pay $1,062 out of pocket for private transportation to get his body back to Toronto for a funeral.

The circumstances surrounding the traumatic scenario were also brought up during question period at Queen’s Park on Thursday, where Ontario’s Minister of Health offered her “sincere condolences” to Nguyen’s family and said the situation “should never have happened.”

Minister Christine Elliott said that patients and their families are not to incur any costs for transportation services back to one’s city of residence, “nor will they be required to pay the cost in the future.”

She added that hospitals across the province will be made aware of this.

“I understand they had already paid the costs, but we will ensure that they are reimbursed and we are working with the hospital right now to ensure that and we will make every effort to make sure this does not happen to anyone else,” Elliot said.

Cardiovascular disease could be diagnosed earlier with new glowing probe

Have high blood pressure? You may want to check your meds