You Are Here Home Health News Ottawa to announce supports for people, businesses hit by COVID-19 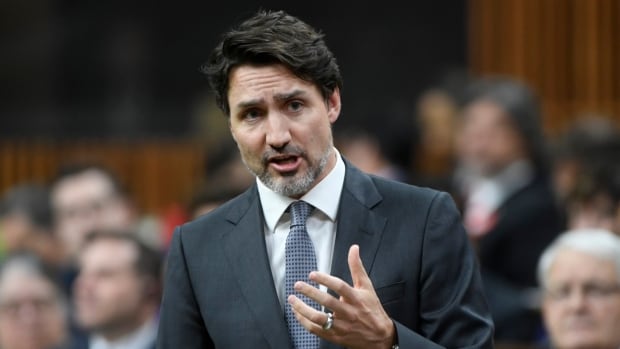 Prime Minister Justin Trudeau will announce on Wednesday supports for people and businesses affected by COVID-19 — the first part of a federal package designed to help workers who are forced to stay home from their jobs as the virus spreads and disrupts the economy.

Trudeau will announce supports for those facing “immediate pressures,” with more aid for other sectors to be announced in the coming days.

Sources have told CBC News that the measures Trudeau will announce include waiving the one-week waiting period for Employment Insurance benefits for people who have to self-isolate because of the outbreak.

The package also will include a boost to research funding to combat the virus, over and above the $27 million announced in Montreal last week.

Ottawa is also leading a pan-Canadian effort to bulk-buy certain medical devices, and the federal government says it will be ready to support provinces needing further assistance to shore up their health care systems as the number of confirmed cases rises.

Trudeau met with top ministers this afternoon, including Finance Minister Bill Morneau and Health Minister Patty Hajdu, as part of the government’s response to a virus that has sickened dozens across Canada and killed one person in B.C.

“We recognize that there are going to be significant economic impacts for Canadians, for workers, for businesses, and that’s why we’re going to be talking very soon about measures that Canada is going to put forward to support people on the economic side,” Trudeau told reporters on his way into question period.

Beyond Wednesday’s planned announcement, Duclos said the federal government will spend more to help people “go through the crisis” and help “workers, families and businesses thrive and sustain themselves.”

While the debt-to-GDP ratio has been falling in recent years, Ottawa is running a federal budget deficit of $26.6 billion for the 2019-20 fiscal year.

In a speech on Friday, Morneau said Ottawa has the “tools to respond quickly” to economic disruptions and that there will be an “increase in our risk adjustment provision” in the upcoming federal budget.

Stock markets have cratered and the price of oil has dropped to levels not seen in years due to the global panic over the spread of COVID-19. Italy, the world’s ninth largest economy, has locked down travel within the country to slow the spread of the virus.

“I don’t think purely monetary rate cuts are going to satisfy the disruption that’s coming at corporate cash flows and consumer cash flows,” McKay said at a conference, citing the Bank of Canada’s decision to cut rates by 50 basis points to 1.25 per cent last week.

“We’re having an ongoing dialogue with governments around the world around co-ordinated and effective and targeted fiscal stimulus, whether that’s payroll tax cuts or whatever mechanism has to be used to inject cash flow into the economy.”

Natural Resources Minister Seamus O’Regan said Tuesday he would self-isolate as he awaits the results of a COVID-19 test. O’Regan said he has been battling a head cold “for a few days” and saw his doctor out of an abundance of caution.

I’ve had a persistent head cold for a few days so, as a precaution, I saw a doctor. <br><br>They recommended a test for COVID-19. I’m not aware of contacting anyone infected, but was told to remain in self-isolation until we get the results.<br><br>Feel fine. But I’ll work from home.

“I’m not aware of contacting anyone infected, but was told to remain in self-isolation until we get the results. Feel fine. But I’ll work from home,” O’Regan said.

Hajdu said Ottawa has been crafting a package of supports for Canadians whose daily lives are disrupted by COVID-19.

“We will have Canadians’ backs. We will make sure Canadians are supported from a health and safety perspective and we have the measures in place to protect them, and protect them in an economic downturn situation,” Hajdu told reporters.

“We’ll come back and talk to you about the packages that we’re proposing shortly.”

She said Canadians should continue to avoid all non-essential travel to places like China, Japan, South Korea, Iran and Italy.

Air Canada announced Tuesday it would be halting all flights to Italy until May 1. Hajdu said the flight cancellations were a “business decision” based on a notable decrease in the number of Canadians travelling to that country because of Global Affairs Canada advisories.

The travel industry has seen a wave of cancellations as companies suspend non-essential business travel and conventions as a precaution.

In a notice sent to guests Tuesday, WestJet said it has introduced additional measures to “increase the sanitization” of its aircraft. The airline is now using “hospital-grade Clorox wipes and spray” as part of the cleaning process.

‘We want to ensure that workers are supported’

When asked what measures the government is considering, Tassi said, “We are monitoring this situation very closely.”

“I, as minister of labour, have not been overwhelmed with people that are saying, ‘We don’t want to go to work and we feel compelled to go to work.’ My office and my door is always open to get that input and we will respond.”

She said workers in federally regulated workplaces, like banks, broadcasting and telecommunications, can flag what they believe to be unsafe workplaces to federal authorities for an assessment.

Public health officials have told people who aren’t feeling well to stay home from their workplaces as the number of COVID-19 cases continues to increase across the country. But many workers, particularly hourly wage-earners, don’t have access to paid sick leave.

In Budget 2017, the government reduced the waiting time for Employment Insurance (EI) claims from two weeks to one, which allows workers to tap benefits earlier. Some employees, like those working in the “gig” economy, do not have access to these federal benefits.