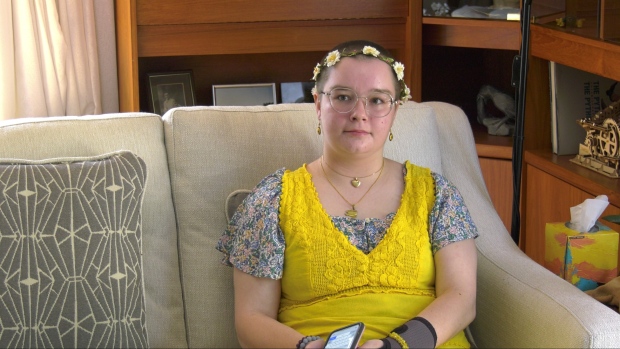 OTTAWA — Ophelia Brown and her family have been turned away after months of fighting for access to medical assistance in dying (MAID).

It’s a decision the 22-year-old Ottawa woman and her family never thought they would have to make.

“It’s been awful, watching her lose the ability to do the things she loves and lose her future,” said her mother Sheila Craig.

After more than a decade of severe pain, battling a rare disease called complex regional pain syndrome, Ophelia Brown and her parents, Sheila Craig and Ian Brown, decided to apply for a medically assisted death.

“There just isn’t anything worth living for anymore; it’s just pain and all I can see ahead of me is the pain getting worse. The best way I can describe it is it wasn’t time until it was time,” Ophelia said.

Complex regional pain syndrome is a condition that causes excess and prolonged pain that is much greater than normal. In chronic and severe cases, the pain can be disabling.

“When she talked about ending her life, as awful as it is as a parent to hear that, we totally understood,” said Craig.

As of March 2021, there have been changes to the medically assisted dying law.

Patients are no longer required to have a foreseeable natural death—a condition that will worsen over time may qualify.

That change allowed Ophelia to apply, but she was denied and told her case was too complex.

The Ottawa Hospital handles local assisted death requests. In a statement, they said doctors “have the right to choose whether or not to participate on a case-by-case basis.”

“The course of doing MAID assessments is a very complicated and complex process. You’re not always going to find clinicians agreeing and sometimes clinicians will disagree with the patients,” said Dr. Chantal Perrot, a MAID physician and board member at Dying with Dignity.

Over the last five months, Ophelia’s family has fought for her to receive access to a medically assisted death but has been continually turned away.

Time is not on their side. Ophelia’s chronic pain condition is getting worse.

“In the five months I’ve spent fighting for my right to a dignified death, my disease has spread in ways I could not have predicted,” Ophelia said. “My body has shut down, and the emotional toll this process has had on me and my family is immeasurable.”

So, Ophelia and her family have chosen an ever more difficult path.

“She’s suffered for 14 years. How long do you have to suffer to access what is legally your right?” asked her father, Ian Brown.

A feeding tube has been removed and Ophelia will now only receive palliative care.

“Ophelia was quite distressed because it’s not dying with dignity in the same way that MAID would’ve been, in terms of maintaining the quality of life until the end,” said Brown. “There will be more suffering.”

Ophelia and her family will spend the remaining time they have together hoping to make lasting memories and fulfilling her final wishes, but it’s not the end they hoped for; it will actually be worse.

“It’s been utterly brutal and not at all the way the last few months of our daughter’s life should’ve been,” Craig said.