You Are Here Home Health News P.1: What we know about the coronavirus variant now spreading in Canada 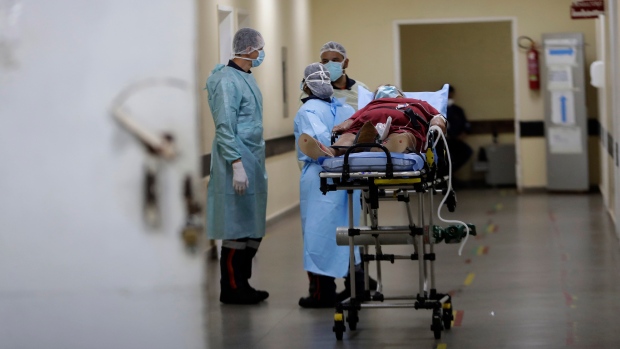 From an outbreak on a Canadian NHL team to clusters of cases detected in Alberta, parts of Canada have been seeing skyrocketing COVID-19 numbers that are possibly linked to variants of concern over the last several weeks.

While most variant cases in the country have stemmed from the B.1.1.7 variety first detected in the United Kingdom, troubling outbreaks of the P.1 variant, which was first identified in Brazil, are starting to emerge with more frequency.

Public Health Ontario’s latest epidemiological report shows a total of 103 P.1 cases in the province, including one new case identified over the weekend.

Maria Sundaram, an epidemiologist with the University of Toronto, says the growing number of variant cases are concerning. And while P.1 has gained more prevalence in the west recently, that’s not to say the rest of the country shouldn’t be on guard.

“All of the identified variants of concern seem to have (qualities) that are very bad news for us in terms of pandemic control,” she said.

“The numbers are a little bit higher in B.C., but … things can turn on a dime.”

Here’s what we know about the P.1 variant:

WHAT IS IT, AND HOW DOES IT DIFFER FROM OTHER VARIANTS OF CONCERN?

The U.S.-based Centers for Disease Control and Prevention (CDC) says the P.1 variant has 17 unique mutations, including three on the part of the spike protein that binds to cells when we become infected.

Schwartz, a researcher at the University of Alberta, says the mutations allow the virus to bind more efficiently to cells when it enters the body, and may also interfere with the ability of antibodies — produced from prior infection or from vaccines — to recognize the variant form.

HOW MUCH MORE TRANSMISSIBLE IS IT?

Experts say the variants first detected in the U.K. and South Africa are roughly 50 per cent more transmissible than the earlier form of the virus, which is known as the “wild type.” But they still aren’t sure how contagious P.1. is compared to the others.

The data on P.1. is still new, Sundaram says, but what’s more concerning is the idea that this variant could reinfect those who have already had COVID-19.

A study from Manaus, the largest city in Brazil’s Amazon region, found that the P.1 variant was identified in 42 per cent of cases sequenced there from late December, even though approximately 75 per cent of the region’s population had previously been infected.

“We’re talking about people who should have been protected by their own immune system with a response from the actual pathogen itself,” Sundaram said.

The latest weekly global epidemiological report from the World Health Organization (WHO) listed Brazil as the biggest hot spot for new cases with 533,024 reported for the week ending on March 28. The country, which has the P.1 variant as the dominant strain, reported 508,000 cases the week before.

WHERE IS THE VARIANT CIRCULATING IN CANADA?

The P.1 variant has been detected across Canada, but recent clusters out west in B.C. and Alberta have alarmed experts.

B.C.’s top doctor Bonnie Henry said last week a large cluster of P.1 cases in the Whistler region had been contained. Though a small number had spread beyond Whistler, Henry said those cases were being watched closely.

An outbreak among the NHL’s Vancouver Canucks has also reportedly involved the P.1 variant, though the team and league have not confirmed that.

Sixteen of the Canucks’ 22 players were on the NHL’s COVID protocol list as of Monday afternoon. Not all players on that list have necessarily tested positive, however. The list also includes players who must self-isolate after being a close contact with a confirmed case or for travel reasons.

Hinshaw said Saturday that the outbreak could be traced to a returning traveller. She did not say where the traveller returned from, where the outbreak occurred or how many cases were involved.

DOES THE VARIANT CAUSE MORE SEVERE DISEASE?

Schwartz says it’s likely that P.1 may result in more serious disease, and that younger people could be more susceptible to a severe outcome with that variant compared to the the “wild type” of the virus Canada has mostly been dealing with up until now.

He adds, however, that data on P.1 is “quite preliminary” compared to B.1.1.7, which is also showing an increased chance of more severe infections.

“We’ve been aware of this variant for a shorter amount of time, and because the data that’s been generated hasn’t been quite as robust, we still don’t know for sure,” he said. “But this is certainly our concern.

WHAT IMPLICATIONS DOES THIS VARIANT HAVE FOR THE VACCINES?

Sundaram says research suggests the mRNA vaccines from Pfizer-BioNTech and Moderna lose some effectiveness against the P.1 variant, though that’s not to say they won’t work at all.

She noted those results were based on lab studies.

But the higher the prevalence of variant cases the more worried she becomes.

“When we start to see this uptick, and we look at this concurrent potential reduction in vaccine protectiveness … it really becomes a very concerning scenario,” she said. “We need more information to identify exactly to what per cent vaccine efficacy (drops) in real-world scenarios, but it seems quite likely that it will.”

This report by The Canadian Press was first published April 5, 2021.

People aged 15 to 29 should get annual testing for chlamydia, gonorrhea: experts