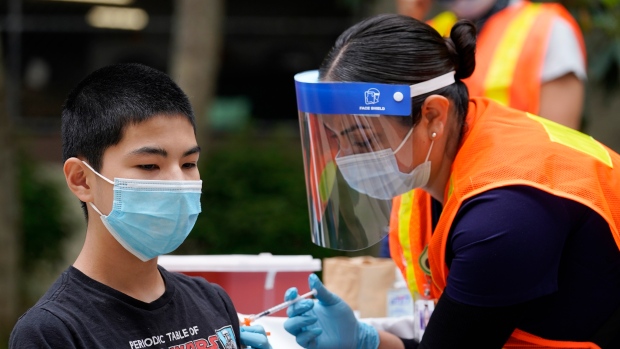 TORONTO — The side-effects of the Pfizer-BioNTech COVID-19 vaccine in children aged 12 to 15 who are at high risk of complications from the virus are likely to be mild or moderate, according to a small study.

“These data are especially important as they are representative of the children who are most likely to benefit from vaccination,” the authors wrote.

Healthy children who have contracted COVID-19 have generally experienced mild illness, however, those who also had neurological conditions were more likely to be hospitalized and suffer severe symptoms, according to the authors, citing health data from the U.K. Therefore, in order to reduce their risk of infection, this group would not have been included in early vaccine safety studies.

In July, the U.K.’s Joint Committee on Vaccination and Immunization recommended the Pfizer vaccine be administered to children aged 12 to 15 with severe neurological disabilities. The study, published Aug. 26 in the journal Archives of Disease in Childhood, asked the parents of 27 of these high-risk children to record any side-effects that occurred after the vaccination of each child.

The age range of children included was 12 to 15 years old. They had various neurological conditions, including muscular dystrophy and cerebral palsy, along with a range of coexisting medical conditions, such as epilepsy, congenital heart defects and immune deficiency for which they were receiving drug treatment of various kinds.

All reported side-effects were considered mild to moderate, with the exception of one child who experienced severe fatigue and discomfort, as well as increased agitation. One family reported a change in seizure type to clusters, but this had resolved within a week.

In total, eight “events” were reported in six children after the first dose, all of which had resolved within 72 hours, according to the study. These included mild rash, headache, diarrhea, sore throat, neck pain, difficulty sleeping and low blood sugar. After the second dose, eight more “events” occurred in five children, including diarrhea, vomiting, armpit swelling and blisters around the mouth.

The overall sample size may have been small, but the researchers say the results should be reassuring for parents of teens who are at risk of severe COVID-19 illness and are most likely to benefit from the vaccination.