You Are Here Home Health News ‘Please breathe’: Montreal medical specialists use ‘extraordinary’ measures to save the lives of a pregnant woman with COVID-19 and her baby

MONTREAL — Carman Tang won’t soon forget the harrowing scene in her parents’ bedroom that day in early March in Montreal.

“It was hard to see my mother struggling,” and equally unnerving to see her father so “worried about my mom,” the 17-year old said.

First responders were there administering oxygen to Lor Chou Tang, who was gasping for breath. COVID-19 had started to do its worst, invading her lungs. An ambulance was on the way.

“They took my mom…it was very scary,” the teenager said in an interview.

The health of two family members hung in the balance. Tang was 32 weeks pregnant with Carman’s fourth sibling at the time.

A serious case of COVID-19 and a late-stage pregnancy was a risky combination that had doctors at the Royal Victoria Hospital and the Montreal Children’s Hospital on alert as soon as Tang was admitted to the ICU.

Intensivist Dr. Arnold Kristof took charge of the new patient and became the pilot of the airplane in the analogy he used, to describe the crisis they soon faced.

About 36 hours in, he knew he would need a large and highly skilled crew on board with him if they were to steer the patient and her baby to safety.

“This airplane was crashing,” Kristof said.

So a team of about 20 medical specialists and health care workers from the adult and pediatric hospitals worked together and settled on a plan of action.

A few hours later, they executed a complex emergency landing, which was a first of its kind for any institution in Quebec.

‘A THREAT TO MOM AND BABY’

From the outset, Tang required significant oxygen therapy in the ICU to support her lungs.

One of the complicating factors was that Tang’s very “pregnant belly,” was compressing her lungs, diaphragm and aorta, restricting oxygen and blood flow even more.

“The situation was quite extraordinary,” because it was “something we hadn’t dealt with before.” said fellow intensivist Dr. Gordan Samoukovic.

By 11 a.m. on March 10, Tang’s third day in the ICU, her condition had deteriorated so dramatically “we felt that her life was in danger, and possibly the baby’s,” Kristof said.

“It was looking like the mom was going to need to be intubated and ventilated,” Samoukovic added.

But would that save the duo or harm them?

With a crisis looming they had to try to figure out the best way to ensure both survived, said Samoukovic.

“We kind of realized there was a good likelihood that we were going to have to deliver the baby sometime soon,” said Kristof, but how?

Kristof arranged a meeting with 20 specialists, including intensivists, nurses, obstetrical and neonatal specialists, respiratory therapists, an anesthesiologist and a perfusionist.

“We had no reason to believe the baby was in any kind of distress,” said Dr. Angela Mallozzi, an obstetrician at the Royal Victoria Hospital.

And neonatologist Dr. Marc Beltempo from the Montreal Children’s Hospital thought, “the odds of survival of that baby were excellent at 32 weeks,” if a delivery became necessary.

What they all wanted to prevent was the need for an emergency delivery while Tang was being resuscitated, in the event the pregnant woman started going downhill during or after intubation.

“That was not a favourable plan to anybody,” Samoukovic said.

One scenario involved moving Tang to an operating room to deliver the baby, if her condition could be stabilized.

The final scenario reviewed was the most drastic — the last resort — because it had never been done before.

“We chose to support the mom with ECMO while delivering the baby via Caesarean section, in the very ICU room where the mum was,” explained Samoukovic, who is also head of the adult ECMO program at the MUHC.

When patients are hooked up to extracorporeal membrane oxygenation (ECMO), blood is pumped into a machine, which takes out CO2 and puts in oxygen, before allowing the heart to pump that blood around to the rest of the body. The process takes the strain off the damaged lungs.

“The literature, the data, for pregnant patients on ECMO with COVID are pretty limited,” Mallozzi said, and no one could find any report of a Caesarean delivery while a patient was on ECMO.

But if nothing else worked, they knew they’d have to risk it to try and save two lives.

As her mother was being treated in the ICU, at home, Carman was thrust into a new role. The trilingual CEGEP student became the liaison between the hospital and the family.

“Every time, my father came to give me the phone so I could speak to them,” she explained, adding that he understands English and French but he doesn’t “speak very well.”

Carman hid her concerns for the sake of her siblings and father, she said.

NO TIME TO SPARE

Now it was time to prepare.

“Everything had to be set and ready to go,” said May Tam, a perfusionist on the ECMO team who would be at the patient’s side throughout.

Mallozzi had obstetrics equipment brought down to the ICU where she would be performing the Caesarean “amidst extreme COVID precautions…and in a regular bed.”

The risk of COVID-19 contagion meant only six people would be in the room.

Even the neonatologist and respiratory therapist would have to wait outside for the baby to be handed to them so they could start resuscitation in a clean space.

But where? The ICU was filled with COVID patients. The nearest available room was 50 metres away.

Beltempo was the only one who had the opportunity to rehearse. He got out his cell phone and timed the walk, simulating holding the newborn in his arms. It took about 25 seconds. He wasn’t happy.

“That’s 30 seconds without oxygen, without breathing,” he said, enough time to cause brain or tissue damage. Plus the baby freezes.

Plan B: they decided they’d put the baby in a transport incubator that has an oxygen source built in so they could start “resuscitation as we’re walking along.”

Tang was by this time very weak and could barely lift her oxygen mask, but Kristof went to see her and explained what would be happening “and that she would be okay.”

Carman had one last video call with her mom the day before.

“I didn’t know it was the last call before she went into an artificial coma…she couldn’t talk and I was worried,” she said.

“Everybody was very anxious,” Samoukovic said.

“But at the same time you’re reassured that you have all these people helping you,” added Kristof.

Tam was stationed by the ECMO machine.

“We all took a deep breath and said okay, we planned this well – let’s do it,” she said.

The pregnant woman was sedated and intubated, but she became unstable. So Samoukovic proceeded with ECMO, “placed the catheter,” and “established the circuit, the oxygenation for the mom,” he said.

“The best thing with this team was we discussed every step,” Tam said, so when she was asked if she thought they could move to the operating room for the delivery, Tam was firm.

“My ECMO system was telling me I was maxed out, and if something happens en route I may not be able to support her anymore. We have to do it here,” the perfusionist insisted.

ECMO is a high-risk therapy, and Tang could have developed a blood clot and suffered a cardiac arrest at any time. There was also a risk of excess bleeding because she’d been given blood thinners.

The surgery to deliver the baby began. “We basically just focused and said okay this is a C-section like any other that we do on an emergency basis on a pre-term pregnancy,” Mallozzi said.

It went off without a hitch.

And then there was Bella, a fifth child for the Tangs, another sister for Carman.

They all felt “a huge sense of relief,” said the obstetrician.

Tam was awestruck. Although she works in surgery every day, she had never assisted in the birth of a baby.

“When you saw the baby being whisked out and then when the mother was able to oxygenate better…I was like, wow,” she said.

But Bella was not breathing.

Bella was handed off to a respiratory therapist, placed in the incubator and the neonatology team started the clock.

Neonatalogist Marc Beltempo was gowned and ready, and started pushing the incubator down the hallway. Straight, then a 90-degree turn.

“The first thing I was thinking is let’s make sure nobody is in the way and we don’t crash this incubator into a wall!” he said.

His mind was turning over all the things that could go wrong.

“We don’t have any sense of vitals,” he said. “We don’t see the baby breathe during that time, all we know is we’re pushing air into the lungs and are hoping it’s going well… that 25-30 seconds feels like an eternity. You cannot get to where you want to be faster.”

Arriving safely at the cleanroom, Beltempo scooped up Bella and placed her on a specialized resuscitation table inside.

“We needed to work on opening up her lungs to breathe. She had to eliminate the anesthesia from her system, but the mom also has COVID and we’re not too sure how that affects the placenta, the transition,” said Beltempo. “The only thing we’re thinking is please, start breathing, you can do this, you’ve got this.”

It took Bella about eight “stressful” minutes to take breaths on her own.

“We were just so happy. I think we all connected [in that room]…let’s hope the mom makes it too,” he said.

It couldn’t have gone any better. Bella’s mother’s condition stabilized right after delivery.

Tang was removed from the ECMO machine six days later and “became more of an ordinary patient,” said Samoukovic. She was soon well enough to go home.

“It was a triumph for all of us at that moment,” said Tam.

Since Bella was born prematurely, she remained in the neonatal intensive care unit at the Montreal Children’s Hospital for a few weeks before joining her mom and family at home. Now about two months old, she is thriving. 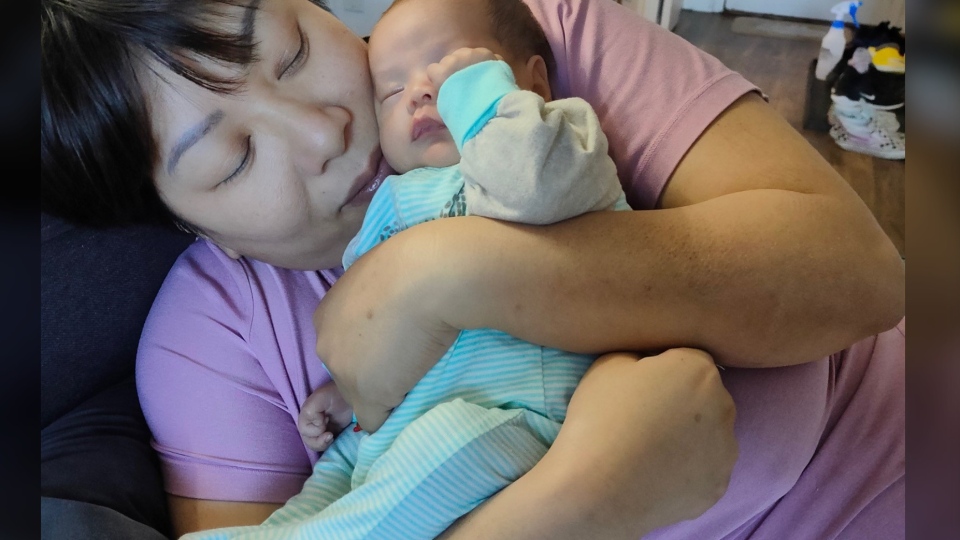 With the family back together, the healing is underway and Carman and Bella are bonding.

“When I first held her, I couldn’t stop smiling…I just go into her room and watch her sleep,” she said.

Carman and her father want to tell everyone now “to respect the rules of the pandemic, or it will take longer to get back to normal life.” 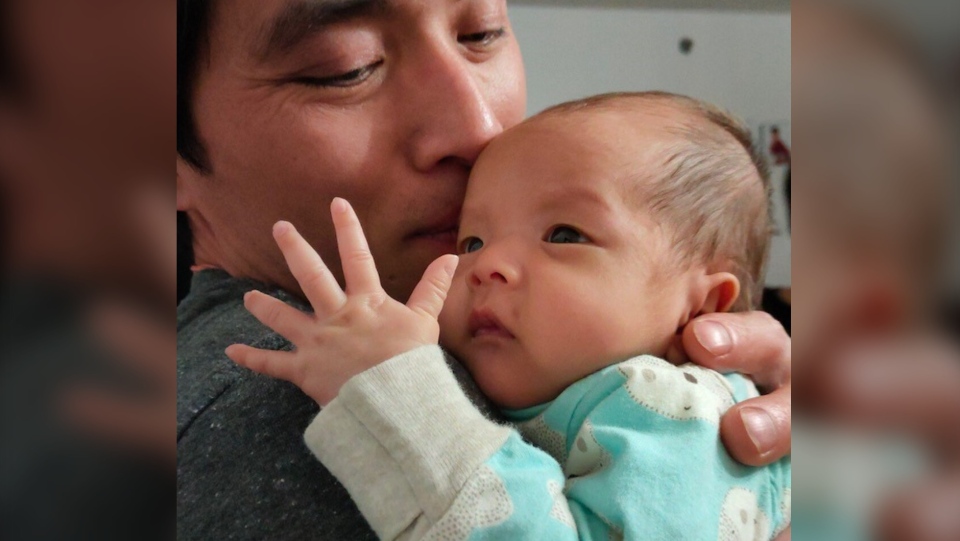 ‘IT WAS QUITE SOMETHING’

Kristof couldn’t agree more with Carman and her father about preventing COVID-19.

“It was a pretty scary situation that a woman and her baby almost passed away,” he said. “Only after the fact you say, oh my god, that was a close one.”

But while several stars have to align for everything to go well in an ICU, the outcome in this case has the group of specialists from the adult and pediatric hospitals reflecting on what teamwork really looks like.

“I have a fair bit of experience but everyone around me – they’re superb. They’re a superb bunch of people,” said Kristof.

“Everybody was very involved and invested in both of these patients, ” Samoukovic added, while Tam explained that this is why she went into the job.

“That’s why we’re so passionate,” she said.

And after a terribly long 15 months in the ICU, when COVID-19 has wrested away much control, knowing you can count on people really counts.

“When we finished that day and I left the hospital we all thanked each other,” Beltempo said. “There were so many hurdles but the only question we got from anyone was, ‘How do we make this happen?’ It was such a proud day to be part of a team like that.”