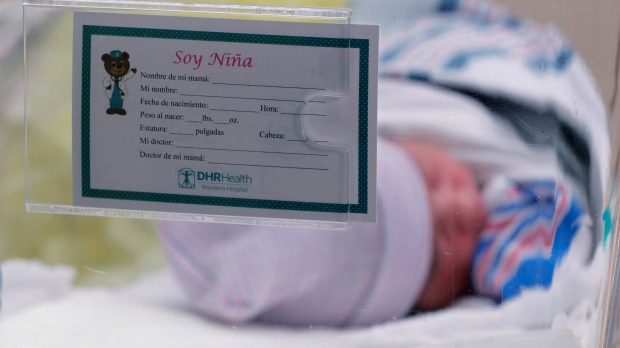 TORONTO — Women who were infected with COVID-19 during their pregnancy were able to pass the antibodies they developed through the placenta to their unborn child even if they didn’t show any symptoms of infection at the time, according to a new study published Friday.

The study, which also found that the mothers did not infect their child in utero, could help guide vaccine trials for pregnant women, researchers said.

The paper, published by the peer-reviewed JAMA Pediatrics, also said that the longer the period between when a mother caught the virus and when the newborn was delivered, the greater the amount of antibodies transferred.

“Our findings demonstrate the potential for maternally derived antibodies to provide neonatal protection from SARS-CoV-2 infection and will help inform both neonatal management guidance and design of vaccine trials during pregnancy,” researchers concluded in the paper, adding that further studies were necessary to determine whether the antibodies were enough to protect newborns against infection.

For the study, maternal and cord blood for antibody testing were collected from 1,471 mothers and their babies out of a total of 1,714 women who delivered at Pennsylvania Hospital between April and August 2020. Antibodies for SARS-CoV-2, the virus that causes COVID-19, were found in 83 of the 1,471 women, or just under 6 per cent. Fifty, or 60 per cent, out of the 83 women who tested positive for the coronavirus never showed any symptoms.

The IgG antibody, which develops following an infection or immunization, was detected in the cord blood of 72 of the 83 infants born to mothers who had been infected. The transfer ratios were more than 1.0.

“We found efficient transfer of IgG antibodies from women who were SARSCoV-2 seropositive … and a positive correlation between maternal and cord antibody concentrations,” the authors wrote.

The IgM antibodies, which are the first ones a body makes when it fights a new infection and can only be produced by the fetus in this case, were not found in any cord blood samples, indicating that the mother did not infect their child during pregnancy. This was true even in cases where the mother was critically ill. The results aligns with the latest evidence that infecting a baby while pregnant, while possible, is rare.

The latest findings shed light on how the immune responses of pregnant women with COVID-19 could help with protecting infants.

“These infants were potentially unprotected despite documented maternal infection,” infectious disease specialist Dr. Flor Munoz with Baylor College of Medicine wrote in a journal editorial that accompanied the study’s release.

“Maternal infection shortly before, during, or after delivery, when sufficient IgG antibody is not available for transplacental transfer, results in ongoing vulnerability of the infant who could become infected if exposed to the mother or other infected household contacts.”

The paper’s authors said some of the limitations of their study included the fact that samples came from just one hospital and that they were able to gather data on only a small number of pre-term births. A greater sample size would allow them to investigate whether it mattered at what point during a pregnancy a mother was infected and how that might impact the transfer of antibodies across the placenta. The scientists also had to rely on medical records, which limited their ability to assess COVID-19 symptoms during the pregnancy.