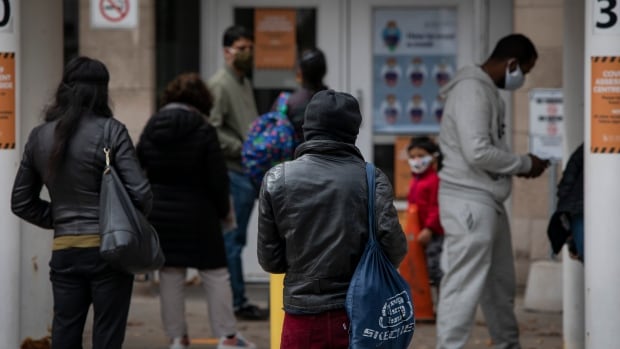 Ontario reported an additional 615 cases of COVID-19 on Monday, as the province begins its move toward appointment-only testing for the illness.

Toronto Public Health said over the weekend that it would temporarily suspend COVID-19 contact tracing outside of outbreaks in congregate settings like long-term care homes because it is overwhelmed by a surge of new cases in the city.

Other public health units that saw double-digit increases today include:

Health Minister Christine Elliott said about 58 per cent of the new cases reported today are in people under 40 years old. The share of new daily cases in that demographic has been slowly but steadily creeping downward in recent weeks, a trend that provincial health officials have attributed to younger people increasingly transmitting the virus to more vulnerable, older age groups.

Some 56 of the newly-confirmed infections reported today are school-related, including 31 students, eight staff and 17 people categorized as “individuals not identified.” A total of 335 of Ontario’s 4,828 publicly-funded schools have now reported at least one case of COVID-19 in students or staff.

Meanwhile, Ontario’s network of labs processed 38,196 test samples for the novel coronavirus yesterday, while the backlog of tests waiting to be completed sits at 68,006 — down from a high of more than 90,000 last week.

Ontario recently announced it would end testing for asymptomatic people at its 153 COVID-19 assessment centres, instead moving to an appointment-only model for those with symptoms of the disease. The decision was made, in part, to help labs clear the backlog of test samples.

The last day for walk-in testing was Saturday. Health experts have warned the shift could result in artificially-low new daily case counts later this week.

Ontario has now seen a total of 54,814 confirmed cases of COVID-19 since the outbreak began in late January. Of those, about 84.6 per cent are resolved. Another 541 were marked resolved in today’s report.

There are currently around 5,474 confirmed, active cases of the illness provincewide, the most since April 26.

The number of patients in Ontario hospitals with confirmed infections also continued its steady upward climb up to 176, seven more than yesterday. That figure may be an underestimate, however, as 35 hospitals did not submit data from their daily bed censuses in time to be factored in to today’s report.

Forty-three patients are being treated in intensive care, and 26 are on ventilators, the most since early July.

The Ministry of Health says it is hoping to hire 600 additional contact tracers and case managers over the next five weeks to help local health units that have been especially hard-hit by a recent surge in new cases.

In an email, a spokesperson for the ministry said Toronto Public Health should expect up to 200 more staff for contact tracing efforts within four weeks, and that hiring begins today. For the time being, they will help reach out to confirmed cases of the illness before moving into contact tracing roles.

Another 150 workers will be assigned to assist Ottawa Public Health in coming weeks, the spokesperson said.