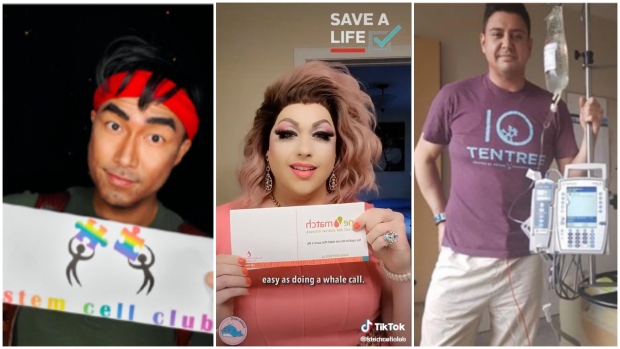 SASKATOON — Justin Saint was crushed in university when they discovered donating blood wasn’t legal because of who they were dating.

“I was actually part of a team that organized the blood drive. But then I got a boyfriend and it went well, so that meant I had to stop participating in my own freaking blood drive,” Saint, who uses they and them pronouns, told CTVNews.ca over the phone.

“A lot of us were baffled by the rules,” said Saint, now a Vancouver-based make-up artist and drag performer. Since the 1990s, Canadian policies — which are currently being contested — have banned sexually active gay, bisexual and some trans men from donating blood.

As of 2009, however, they’ve been able to donate stem cells and bone marrow if they’re between the ages of 17 and 35, and are free of blood-borne diseases, including HIV or hepatitis B and C.

But not a lot of people know that, Saint and others in the community said.

So to cap off the end of Pride month, the national “Saving Lives with Pride” campaign is encouraging all Canadian men who have sex with men to register as potential stem-cell donors. It’s all being run by Stem Cell Club, a Canadian donor recruitment group, and people can register online here.

Organizers and other drag performers are using infographics and short TikTok videos to bring awareness as to how easy it is to give cheek swabs or any temporary side-effects.

In Saint’s short video, he played exaggerated versions of himself in conversation, correcting misinformation about stem-cell donations and who was eligible.

Other videos deal with the same theme of misinformation, employing popular comical filters or dance remixes on the platform. A lot of them use down-to-earth language that avoids medical jargon, to connect with younger audiences.

Tyson Cook has been putting out videos about the topic, recording himself as he puts on make-up and transforms into his drag alter ego Frieda Whales. He said using the platform is crucial in connecting with Canadians who spend a lot of time on the app and might not encounter information like this through more traditional means.

“The message is making sure everyone is included [with] diversity everywhere as much as possible. Because it’s not just the cis, straight white men that can donate and help out. Everyone is eligible to help out,” Cook told CTVNews.ca in a phone interview.

The campaign will run from June 21 to 30 but people can donate at any time afterwards. Many of the videos link back to where people can register or find out more.

This latest drive is similar to a push last February to shore up the number of Black stem-cell donors, another underrepresented group in the registry.

The reason this matters is because recipients need matches from donors with similar ancestral backgrounds. Saint, a Filipino-Chinese man, said “it could be that one queer person could be the match right now.”

Joel Koettle, a gay surgical nurse in B.C. who was diagnosed with Leukemia, strongly supports the campaign. He received a stem-cell transplantation in 2018 and, to this day, still thinks about his donor in Germany.

“Who knew that someone from the other side of the world would be a match. We are planning on meeting at some point when he comes to Canada. At which point, I plan on thanking him for his gift. I consider him my hero,” Koettle said online.

The national campaign has been in the works for the past year but Stem Cell Club first began spreading the word in LGBTQ2S+ communities in 2018 and 2019, when volunteers recruited hundreds of new potential donors in person at Pride festivals across Canada.

Saving Lives with Pride organizer and hematologist Dr. Warren Fingrut said he and his team are aiming “to destigmatize gay, bi, queer donation and to let these demographics know that they will be treated well and with respect as donors.”

Fingrut, who’s been running workshops advocating for a more inclusive blood system, has also enlisted transplant physicians to help get the word out.

Cook took it a step further, saying donations could be a subtle way to potentially combat people’s prejudices.

“It might help out someone who is not accepting of a queer lifestyle. And then maybe they’ll realize: that person looked out for me even though I wasn’t looking out for them and that they’re actually good people.”