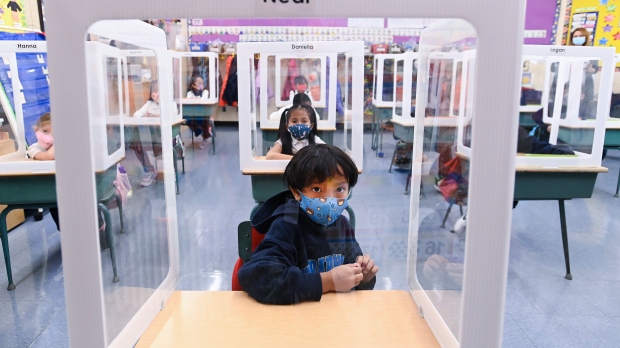 TORONTO — Jessie-Lynn MacDonald was surprised to hear her doctor suggest a COVID-19 test last September when her 10-year-old developed an unusual rash behind his ears.

She didn’t know exactly how Finlay would have picked up the virus, but a positive result confirmed the rash was COVID-related.

The skin condition soon subsided, MacDonald said, but the boy later developed headaches, stomach issues and a ringing in his ear that still plagues him periodically.

“It’s really hard emotionally because he doesn’t know when he’s going to all of a sudden feel it,” MacDonald said. “The time span in between him getting those attacks is definitely improving, but he’s still getting them.”

MacDonald sought answers from a specialist in February.

While she said that doctor told her Finlay’s symptoms likely sprung from his COVID-19 infection, there wasn’t much they could do for him.

“To be fair, nobody really seems to have a good grasp on this,” she said.

MacDonald describes her son’s condition as “long COVID,” a rare phenomenon in which symptoms including fatigue, brain fog and headaches seem to manifest in the weeks or months following a COVID-19 infection. Long COVID has been more prominently described in adults, though some children appear to be experiencing it, too.

With schools reopening soon, MacDonald and other Canadian parents are worried infections among children will soar. And although most kids won’t experience lingering effects, MacDonald is concerned some might.

A direct link between long COVID and the SARS-CoV-2 virus has not been established, experts say, and studies aiming to understand more about COVID’s impact on Canadian kids are underway.

Dr. Stephen Freedman, the lead investigator in a Canadian Institute of Health Research study on COVID-19 outcomes in kids, says the majority of children who test positive will only experience mild illness.

One rare complication is a delayed reaction to the virus called multisystem inflammatory syndrome of children, or MIS-C, which Freedman said impacts roughly 1 in 3,500 kids infected with COVID-19.

Freedman, a pediatric emergency physician at Alberta Children’s Hospital and a clinician-scientist at the University of Calgary, said MIS-C is different from long COVID, which can be harder to define and diagnose.

The problem, Freedman said, is that it’s typically not clear whether the viral infection is causing prolonged symptoms or something else altogether.

“When it’s things like headache, (feeling) dizzy, tired … it’s much more challenging,” said Freedman, who was not associated with MacDonald’s case.

“It doesn’t mean it’s not there — these symptoms clearly exist — but we need studies that look at these children over time to figure out: Are they more likely to have it following a COVID infection, relative to a child who presents with the same symptoms but did not have COVID?”

Freedman said the “verdict is still to be determined” on whether long COVID-19 is a major concern in children going forward.

But he said there’s merit in finding out more.

“Understanding long COVID is one of the most important things we can do to quantify: Is it a real entity in children? How common is it? How severe is it? How long-lasting is it? — so that we can make informed policy decisions.”

Children have been a neglected group when it comes to COVID-19 research, Freedman said, partly because adults have always been more prominently struck by the virus.

But with schools opening next month and more children coming into contact with others, Freedman said we’re likely to see infections creep up in the under-12 age group, which isn’t yet eligible for vaccination. And there’s risk they can spread the virus to vulnerable groups.

While cases and hospitalizations among COVID-infected children are rising predominantly in heavily unvaccinated areas of the United States, Rubin said we still don’t know whether Delta causes more severe disease in kids. But the fact it’s more contagious is concerning.

“If somebody is infected in a classroom setting, chances are there will be a greater attack rate within that classroom than we saw with the Alpha (variant) or the original strain,” he said. “You have two things working against them: it’s more contagious and they’re not vaccinated.”

Freedman said jurisdictions that recently relaxed restrictions might have to consider reintroducing mask mandates when kids return to school.

MacDonald said that while she’s looking forward to getting Finlay back to in-person learning, she and her son have both expressed worries about returning to school.

This report by The Canadian Press was first published Aug. 15, 2021.