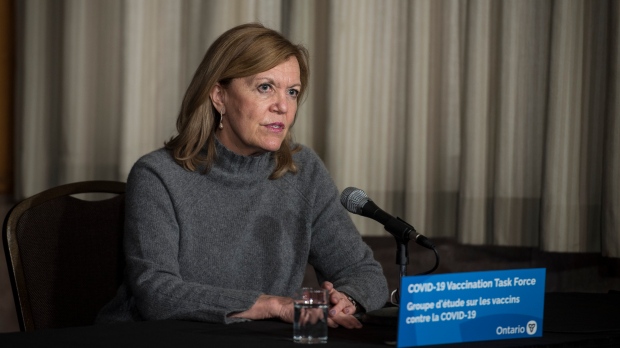 TORONTO — Public health experts and local politicians are arguing that individuals who received a shot of AstraZeneca in Ontario shouldn’t have to wait 12 weeks in order to get a second vaccine dose as the province works to curb the spread of COVID-19 and prevent a potential fourth wave.

New modelling data released Thursday suggested that full immunization in high-risk communities is required in order to prevent an increase in daily COVID-19 cases—particularly for the Delta variant, B.1.617, which is expected to become Ontario’s dominant strain.

That same day, Ontario announced it would be allowing those living in Delta variant hot spots who received Pfizer or Moderna as their first COVID-19 vaccine dose to receive their second dose at a shorter interval.

However, it was also announced that those who received AstraZeneca as a first dose would still have to wait a full 12-weeks before receiving their second, even if it is an mRNA vaccine.

As of Friday, Ontario is the only province in Canada mandating a minimum 12-week interval for those who received AstraZeneca as their first dose.

“We do have some emerging data that indeed if you do wait 12 weeks you mount a pretty robust immune response, but there’s also data demonstrating that those who do mix and match vaccines also mount a pretty robust immune response, and you’ll mount that at eight weeks and 10 weeks as well,” Dr. Isaac Bogoch, an infectious disease expert and member of the province’s vaccine task force, told CTV News Toronto.

Speaking to CP24 Friday, Dr. Peter Jüni, Scientific Director of Ontario COVID-19 Science Advisory Table, hinted that discussions were being had around shortening the gap between AstraZeneca doses and that the Science Table may support a shorter timeline.

“We’ve had some discussions already on the topic and we meet again today,” Jüni said.

“We agreed, you know as a table, on eight weeks and we will have a discussion today with Dr. Huyer and other colleagues and we’ll talk.”

When providing a vaccine update on Thursday, Health Minister Christine Elliott maintained that the science supports a 12-week interval period.

“That is the gold standard and that’s why we are relying on that and continuing to have that as the rule for dosages and second doses of AstraZeneca,” Elliott said.

Mayors in the Greater Toronto Area are also calling for a shorter gap between doses.

Mississauga Mayor Bonnie Crombie put out a statement Friday morning commended those who helped curb the third wave by “stepping up by getting AstraZeneca.”

“It’s not fair they have to wait for 12 weeks for their [second dose], especially with experts saying it’s safe to move to eight weeks. Other provinces moved to eight, Ontario needs to follow suit,” Crombie said.

Brampton Mayor Patrick Brown also took to social media to release a statement, echoing many statements first made by Crombie.

“I implore the government to make second doses available immediately for those that got AZ. It’s supported by both the best scientific and medical advice,” Brown wrote.

While Elliott is calling the 12-week interval “a gold standard,” Brown says he doesn’t know where that medical advice is coming from.

“Left, right, and center, there are physicians coming out saying this is not based on science, not based on the medical advice. Even Dr. Isaac Bogach, on their own COVID-19 Task Force, said it is imperative we get these vaccines in arms as quickly as possible,” Brown told CTV News Toronto Friday, adding that he also did his own due diligence and spoke to top infectious disease doctors at  William Ostler Health, all of which said the interval should be shortened.