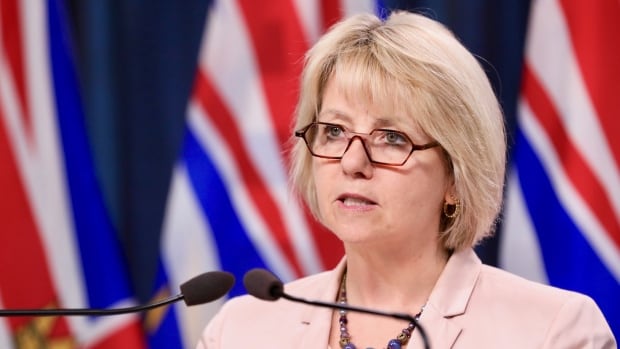 Henry said the teacher was exposed through a social interaction and linked to a known case. All the teacher’s contacts have been notified and none of the students have been exposed, she said.

“We anticipated and planned for this potential,” Henry said, noting that health officials are monitoring the situation very closely.

The province has now confirmed a total of 2,869 cases.

Two more people have died from COVID-19, both of them in long-term care, Henry said, bringing the total number of deaths to 173.

Fifteen people are in hospital, seven of whom are in intensive care.

Henry said there are no new outbreaks. Seven outbreaks remain, six of them in long-term care and one in acute care.

‘Have a wonderful summer’

Thursday marked the last day of instruction for schools before the summer break. Henry commended teachers, staff and students for persevering during the pandemic.

“Congratulations,” she said to students.

“You’ve made it through one of the most challenging years I’m sure any of us will ever remember. Have a wonderful summer and remember to be safe.”

Henry said officials have learned a lot from resuming in-class instruction. A committee led by the Ministry of Education is working on plans for a return to school in the fall, she said.

The latest numbers come as B.C. enters Phase 3 of its reopening plan.

Premier John Horgan announced Wednesday that residents are now allowed to travel within the province as hotels, motels, resorts, spas and RV parks look to reopen.

“I think this can be an exciting summer for all of us, but be mindful, this is not regular programming,” he said.

The film industry and select entertainment venues, such as movie theatres, have also been given the green light to start opening.

Dr. Henry cautioned Thursday that communities, including First Nations, may not be ready to receive visitors.

“We need to be respectful of that,” she said.

Henry also addressed media reports that Vancouver is out of the running as a hub city for the NHL.

Henry said her direction to the hockey league was that if positive cases arose, it could mean suspending part of the series.

“Under no circumstances was I going to compromise in any way the health of people here in B.C. and we made that very clear,” she said.

“If it is true that Vancouver is off the table, then I am disappointed because I am a big hockey fan. But I will be happy to watch it wherever it is.”

Shortly after the briefing, the Vancouver Canucks confirmed the city won’t be chosen as a hub.

If you have a COVID-19-related story we should pursue that affects British Columbians, please email us at impact@cbc.ca.